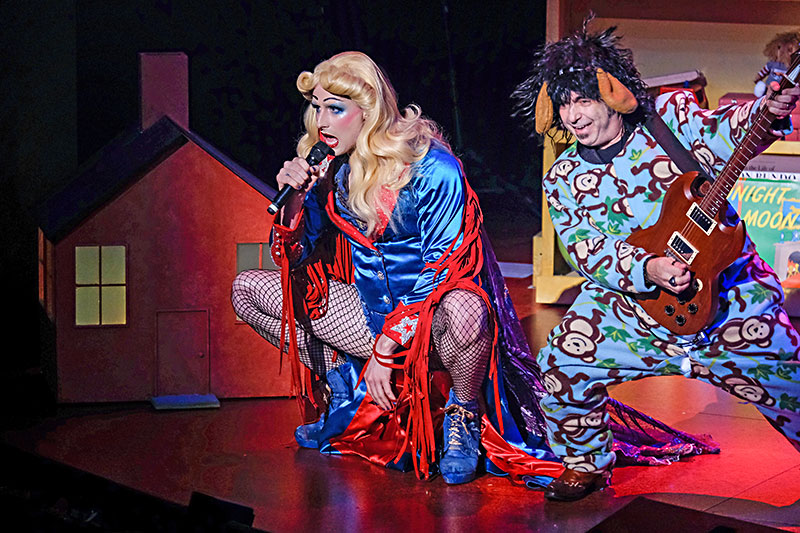 "Spectacular" is the word that springs to mind at the first glimpse of her (him? her? them? her?). Spectacular, as in drenched in spectacle, can't-take-your-eyes-off-this spectacle. It isn't so much the conveyance carrying this Hedwig in that dazzles (a scooter being hardly the stuff of vehicular grandeur, especially in Austin nowadays); it's the mien of this queerqueen – full-on Glamazon: a Texas sky-blue satin jacket accented with white stars and bedazzled cherry-red lapels and cuffs, the sleeves dripping with fringe like a curtain of extra-long Twizzlers going all the way to her knees; those knees and the long, lean legs they belong to sheathed in black fishnets that disappear in denim cutoffs up top and high-heeled lace-up boots down below. With pastel eye shadow that turns her peepers into twin robin's eggs and buttery tresses that could be melting down fresh corn on the cob, she's a vision of Texas excess – Cowboys Cheerleaders chic meets Best Little Whorehouse at Fashion Week. This is a persona fully and spectacularly formed.

That feeling is only bolstered when this Hedwig speaks and sings, owing to the way Daniel Rowan owns the role in Zach Theatre's revival of Hedwig and the Angry Inch. The actor might have shot from the womb wearing this wig and fire-engine lipstick, and he never makes a false step in those stiletto shitkickers, even when punctuating a punch line with a swift shot of one leg up and to the side. The maneuver looks tricky, but just as Rowan makes every bit of his DragFab accoutrement seem part of his own daywear (or evening wear), every move is fully his – and hers.

That also goes for the pain Hedwig speaks of: as a lonely "girlyboy" growing up in East Berlin; as the young bride of a G.I., brought to the U.S. and then abandoned; as the jilted ex whose lover used the music they made to propel himself to stardom while ignoring her; as the victim of a sex change operation that went horribly awry, leaving a scarred mound of flesh between her legs – the infamous angry inch. Rowan conveys the hurt in the bitterness underlying Hedwig's jokes (customized for this show – gags about Austin, Zach, Trump); in the sorrow suffusing the telling of Hedwig's herstory; and in the fury of a punk eruption, with Rowan stripped of Serret Jensen's lush makeup and wigs and Michael McDonald's extravagant outfits, his entire body jerking as if out of his control.

In John Cameron Mitchell's script, Hedwig is trailing her rock star ex, Tommy Gnosis, on a concert tour, performing as near to him as she can. Here, Zach Producing Artistic Director Dave Steakley adapts the idea to have Tommy playing on Vic Mathias Shores, with Hedwig at Zach but forced to play on the set of its family-theatre production of Goodnight Moon. At first blush, the idea seems random and discordant with the musical's in-your-face adult content. But the personal journey that Hedwig shares – her lifelong "search for my other half" – begins in childhood, with innocence shattered. And with each story, each song, something goes away – part of the set, a costume piece – until all that's left is a stage door to leave through. It's as if Hedwig is finally bringing the painful search to an end, resolving her identity crisis by putting Hedwig and every bit of her artfully cast persona to bed. And it feels right.