In the award-winning solo show, Jesús I. Valles sits down, alone with family 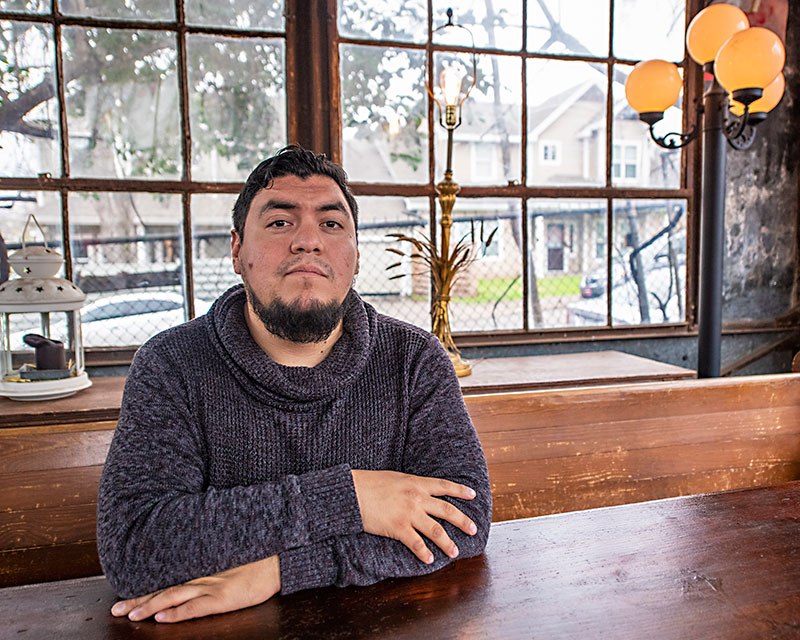 Paper, what is it good for? Absolutely everything. And nothing at all.

Papers to cross borders, to apply for jobs, to secure housing. Documents that, depending on whether they're in one's possession or not, can change lives.

"I learned early on what some people are able to do or unable to do, all based on a few pieces of paper and, you know, some holograms on some plastic. Paperwork becomes personhood at a certain point, and that was never lost on me." Local playwright and poet Jesús I. Valles came to the U.S. undocumented at 9 years old, when their parents brought them to Texas from their home in Ciudad Juárez in Mexico. Through what Valles calls "sheer accident," they eventually gained citizenship. Both of their parents are legal residents, while their sister is a born citizen. In 2009, however, Valles' brother was deported, along with 27 others, following an ICE raid at his workplace in El Paso. Apparently, says Valles, somebody had been working alongside them undercover, gathering information over the course of the three months leading up to the raid.

Immediately following their brother's deportation, Valles turned to the page to process. "I would have conversations with the documents that we constantly had to pull up," they say, mainly through journaling and poetry. Across the ensuing decade, Valles honed their writing craft and returned to the theatre world, which they had quit after graduating high school. Enter 2016: After partaking in a Write Bloody contest, Valles had amassed a collection of 20 poems – some about their brother and citizenship, others on the LGBTQ community and identity. And then came the 2016 presidential election. Valles says that while Trump's election "didn't wake anything" new in them, it did set a kind of clock. "I was like, 'Okay. Limited time, fascism is crazy, we don't know how long it's gonna take, or where it's gonna go. What if you just say 'fuck it' and do whatever you wanted to do? And one thing I wanted to do, always, was writing and theatre. So I was like, 'Cool, do a solo show. Great. Why not?'"

Valles’ first full-length solo show is a life – and lives – interwoven across decades: from Valles coming to the U.S. to growing up queer and nonbinary surrounded by machismo to the ways in which their and their brother’s lives have converged and diverged.

The play, (Un)Documents – mined largely from and expanding on those 20 poems – captures a portrait of family and identity on both sides of the Mexican-American border. An autobiographical work starring Valles and directed by Rudy Ramirez, Valles' first full-length solo show is a life – and lives – interwoven across decades: from Valles coming to the U.S. to growing up queer and nonbinary surrounded by machismo to the ways in which their and their brother's lives have converged and diverged. "In many ways, it feels like an ongoing, extended conversation with my family." After premiering at last summer's Latinx performance festival FuturX, (Un)Docu­ments won Valles two 2018 B. Iden Payne Theatre Awards – for Lead Actor and Original Script – as well as an award for Direction for Ramirez.

Valles acknowledges performing such a personal show alone on the stage involves "rehashing a lot of pain," but it's an act that never feels draining. "Because I don't have a choice," they explain. "What I mean by that is just on a physical level, it feels like the closer I get to those spaces and places, the closer I get to this energized version of myself. And also, I have a really deep love for the people I'm talking about ... for my family and for undocumented communities." All too often, Valles believes, people seek (and perhaps sometimes even expect) stories of agony and sadness in the "cultural products" by or about undocumented communities, in a cycle Valles calls a "trauma mill." Indeed, Valles wants to be mindful of that pain in their work, but they also want to ask, Why not laugh? Why not persevere? "For me, I think it's the idea that, 'Yes, this is painful, and yes, what you're talking about hurt, and yes, there is trauma there. And also, you are alive, and you are breathing.'"

Following the premiere of (Un)Documents, Valles says, much was made of how the play was important now more than ever. A phrase trendy as of late, it's one Valles rejects. "I hate urgency, I hate 'now, more than ever,'" Valles admits. "If it feels so urgent to you now, what is it that allowed you to ignore it for decades?" It's just one of the questions (Un)Documents asks the audience; to make people sit in their discomfort and rethink how they watch and talk about migrant communities, queer people of color, systems of oppression. And to ask questions of themselves and those in positions of power.

"I think the best questions are asked when the work is incredibly difficult. And I want to make work that asks questions, and I don't like for answers to be easy or simple. Because they just aren't."

OUTsider Festival features (Un)Documents Sat., Feb. 23, 2pm, at the Vortex, 2307 Manor Rd. Individual tickets are issued 10 minutes before the start of the show after badge holders have been seated. Ticket availability is not guaranteed. For more information, visit www.outsiderfest.org.

A version of this article appeared in print on February 15, 2019 with the headline: A New Kind of Documentation