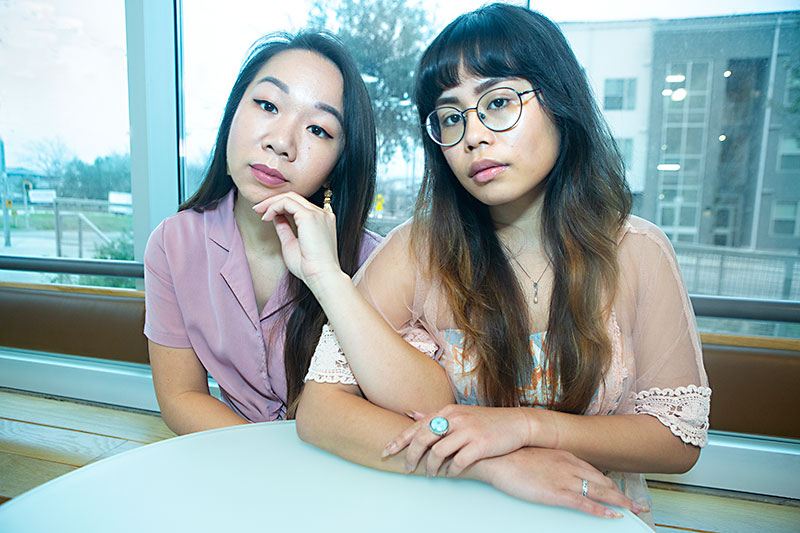 Tell me how adulting sucks.

What makes you happy?

That's what Nina Ho and Regine Mali­bi­ran want to know, and through Collective Blue, they're finding out and spreading the word. By producing dynamic events and sharing refreshing stories, the eloquent, successful and humble duo are growing a name for themselves.

Ho, CEO and creative director of Collective Blue, was born in Vietnam and raised in Houston. Malibiran, co-founder and community manager of Collective Blue, was born in the Philippines and raised in the Bay Area and Houston. Both hold degrees in communications from the University of Texas, where they met and discovered their shared love for creative collaborations, storytelling, and, of course, Beyoncé. After moving to Austin from H-town, they craved a more diverse culture and were driven to pursue their vision with Collective Blue.

“Collective Blue is a metaphor for the ocean ... about how each drop of water is insignificant on its own but becomes something beautiful, powerful, and vast together,” explains Ho.

Founded in October 2016, this lifestyle brand supports diverse artists through event production and digital storytelling. "Collective Blue is a metaphor for the ocean ... about how each drop of water is insignificant on its own but becomes something beautiful, powerful, and vast together," explains Ho. She and Malibiran are motivated by the idea of "Community first, ego never."

"It's a guiding star for me personally," says Malibiran. "It's what drives our work. Are we doing this for the community? 'Community first' means that our goal first and foremost is to create positive impact in the city of Austin for diverse creators – those people that are looking for that home base."

That's been true from their first event, "Austin's Very Own" – a hip-hop showcase and vendor market held at the Gatsby in December of 2016 – to their latest event, Missfits Fest – supported by a grant from Austin's Cultural Arts Division and taking place this Sunday, Feb. 10, at Native Hostel. Missfits Fest is a one-day festival celebrating self-identifying Asian-American women in entrepreneurship and the arts. The fest features speaker panels on mental health, sexuality, media representation and creative careers, an interactive storytelling booth, DJ sets, live music, a Bollywood dance workshop, and a night food market.

"I think it's going to be a new energy that I don't think the city has fully experienced ... the intersection of really dynamic Asian-American women being in one space in Austin at once," says Ho.

Many of Collective Blue's stories, events, and collaborators reflect values in being true to self, following happiness, and finding/providing the means and support to succeed. Collective Blue provides an archive of narratives that shed light on underrepresented perspectives. Their "Shades of Black" photo series highlights the creative expressions and experiences of black millennials. Their piece with filmmaker Nate Araya, creator and executive producer of documentary series Growing Up in America, digs into self-discovery, grappling with the expectations of immigrant parents and how Araya uses dialogue to solve problems and overcome stigmatized topics like mental health within minority communities.

Ho and Malibiran are mindful in their process when it comes to creating social impact while managing a business and the existential questions and responsibilities that come with adulting. Turns out, they're not alone and some of their greatest productions have come out of spontaneous brainstorming with fellow connectors, like The Seer Presents, an event and promotional company that features local artists and organizations. Adulting Sucks, the first event from Collective Blue's Ego Never series, was Nineties-inspired and included activities like Adulting Sucks Bingo with squares for "Still on your x-boyfriend's brother's Netflix?" and "Should I go to grad school?" B-I-N-G-O. You know what else sucks? Alarm clocks. And faulty printers. Ever wanted to reenact that bat-to-printer scene from Office Space? There was literally a "Break Room" for that. The event also showcased speakers that vulnerably and bravely shared their challenges, ambitions, and transitions of being twentysomething entrepreneurs, like Kara Perez, founder of Bravely. Perez paid off $25,302 in student loans on a salary of less than $30,000 and now owns a business to help women grow their financial literacy and pay off their debt. Yes, adulting can suck, but thanks to Collective Blue, there's a special bingo community and supply of unwanted appliances to help us through it.

For Ho and Malibiran, Collective Blue has served as both a cathartic outlet and passion project. True to the collective's name and mission, their most gratifying experiences have been fostering relationships and hearing success stories of artists living their best, most authentic lifestyles through the support of Collective Blue.

"I love that Regine and Nina are both so focused on highlighting a broad spectrum of the community and really a thoughtful and mindful approach to telling stories, says TK Tunchez, Las Ofrendas/Frida Friday founder. "Their portraits (both written and visually) are really about capturing the essence of the person they're working with. I love that Collective Blue is both like a mindful journey and a strong force to be reckoned with – complex like most of our communities."

On the Collective Blue website – www.collectiveblue.co – Ho and Malibiran feature stories like Araya's and Tunchez's. The latest story, with Kristina Gon­zalez Sander, co-producer of Missfits Fest and founder of In Bold Com­pany – an online journal exploring the raw stories of women of color – emphasizes individuality and increasing visibility and opportunities for Asian-American women. Ho and Malibiran met Gonzalez Sander at Collective Blue Havana Nights in August and together have produced an event that is gaining attention beyond Austin's city limits. For Gonzalez Sander, collaborating with Collective Blue has been an opportunity for her to launch In Bold Company and co-create a new, shared narrative through the production of Missfits. "Missfits Fest is the event I always wanted to go to but never existed," says Gonzalez Sander. "It's a really beautiful opportunity to give other Asian-American women a chance to be seen and heard. The feedback and response we've gotten has been so powerful because it hasn't been done before."

The word is out, and Austin is ready. It's only February, and Ho and Malibiran are already making powerful waves by coming together with others to be their unapologetic selves.

Surely Beyoncé would be proud to see Collective Blue living by their truth.

A version of this article appeared in print on February 8, 2019 with the headline: Community First