"Future Artifacts of Sprawl and Sting" at Georgetown Public Library 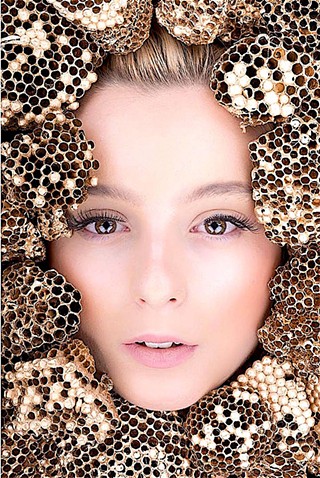 Stuart Wallace creates frames, often, and backgrounds, sometimes, for his artwork – his photography, his found-object arrangements – by taking a flamethrower to planks of wood and burning them black and crackling. If you're 12 years old, maybe especially if you're a 12-year-old boy, you'll automatically think that's cool. You make it to adulthood and you hear about that, about using a flamethrower to make art, you might automatically dismiss it as something only a 12-year-old boy would find worthy of appreciation. But then, friend, you'd be a fool.

Let's start again. One of the good things about digital art is that software allows for professional precisions of balance and symmetry that even amateurs can achieve. And balance and symmetry are parts of composition that carry a lot of impact, especially among the visually attuned who are also somewhere beyond mild on the OCD spectrum of existence. Think of all the striking images you've seen, thanks to the internet in general and maybe Instagram in particular, in which unexpected balances and soul-satisfying symmetries have been achieved and offered for your eyes' delight. Now imagine a fellow striving for and often reaching that sort of precise beauty outside the digital realm. One of the fellows you could imagine would be, here's that name again, Stuart Wallace.

Wallace's photography and found-object assemblages, so many stunning examples of balance and symmetry, whether separately or in combination, are not the ordinary sort of photography and found-object assemblages: There's no raiding of industrial junkyards going on here, no gathering of artificial detritus along some heavily trafficked roadway. The objects that Wallace is currently working with are wasps' nests and dead wasps and ball moss and rope. He's taking those things, dozens and dozens of them, and – perhaps after painting some of them gold, some of them black, some of them white, some of them red – arranging them in discrete presentations or complex combinations that are as fascinating and beautiful as they are, sometimes, eerie.

And, remember the flamethrower? Wallace's natural objects in all their artist-defined balance and symmetry, his series of photographs of a nude blond woman adorned with moss or wasps or rope, are often presented within frames or upon backgrounds of wood that's been carefully burned black and crackling.

Now, Wallace lives in Georgetown and helps run the Georgetown Art Center (where there's currently an exhibition by the faculty of Austin's Atelier Dojo), and this "Future Artifacts of Sprawl and Sting" show of his adorns the upper level of the Georgetown Public Library. So, yeah, it's a small haul to get there – but so worth it. Also, I suppose it's impolite, it's downright gauche, to talk about money, right? But most of us are struggling to get by, aren't we? Much less able to afford original works of art? And these artifacts, even the most brilliantly presented ones, even the bigger ones, are less than $300 apiece – and many are $50, where you'd expect to be charged a few hundred for commensurate works here in the ATX.

Sometimes original art is as astonishingly beautiful as this; sometimes it's available at bargain-basement prices; rarely do those two facts intersect. I humbly suggest you get on it, artlover, before I blow my own strained budget and buy every fucking thing this guy's created.

“Future Artifacts of Sprawl and Sting”