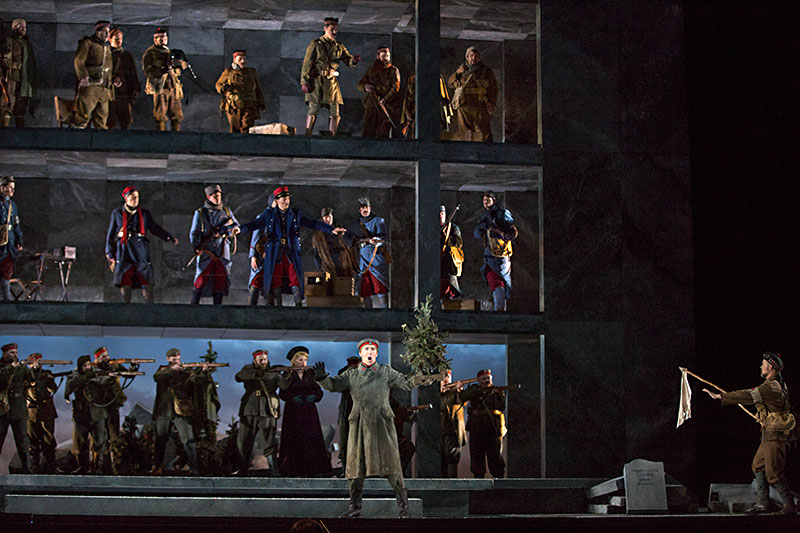 Somewhere in the near distance, a bomb's sudden boom is met by a hellish chorus of rifle shots. In just the blink of an eye, it seems, war has broken out onstage. Soldiers shoot and stab, before descending into barbaric hand-to-hand combat. Billowing smoke and flashing lights do little to distract from the screams of dying men. Only growing louder, mayhem soon engulfs every corner of the stage.

Amidst the madness, we find that the blocking by director Tomer Zvulun and stage director Conor Hanratty guides our eyes to where the action hits hardest. Similarly, composer Kevin Puts' score captures the energy of battle without becoming cacophonous. In a moment of clarity, we realize the blocking and composition are working in tandem to create as vivid an experience as possible. We're trapped in hell. Once the smoke clears, we find ourselves in the trenches of a Belgian battlefield.

For an opera inspired by the 1914 Christmas Truce, wherein soldiers on both sides of the Great War met peacefully in the middle of No Man's Land, the Pulitzer Prize-winning Silent Night doesn't reduce the harsh realities of conflict much. That's not to say, however, that Austin Opera's latest production utilizes violence arbitrarily. This display of chaos at the show's top sets an anxious, somber tone, one which casts a pall over the majority of the first act and, at the time, sparked physical tension within my body. I didn't know it then, but this tension would grow steadily until the show's most impactful moment: the peaceful assembly of three battle-hardened nations.

As with the opera's cinematic source material, 2005's Joyeux Noël, Silent Night's narrative primarily follows three men of French, German, and Scottish allegiance, respectively. Via intimate peeks into wartime trenches, we witness the toll that battle takes on these characters. Impacted perhaps the heaviest is the German opera star-turned-soldier Nikolaus Sprink, played here by company newcomer Joseph Dennis. With his powerful tenor and command of facial expressions, Dennis communicates war's degradation of the creative soul. On opening night, when he took those defiant first steps into No Man's Land, setting off the chain reaction that results in the show's dramatic peak, the audience went breathless and I felt my heart in my throat.

Foreboding tones and spirited performances aside, the key to Silent Night reaching its emotional high point is Erhard Rom's imposingly minimalist set. Described by Zvulun as a "nightmare, progressing vertically," the trenches of World War I are represented by a towering three-story structure, with one warring nation occupying each bunker-like level. The set, which is first utilized to escort us into combat, interlaces with Puts' calmer, more haunting compositions in numbers like "Sleep" to create a foreboding feeling of captivity and fear.

Uncomfortable as they were, these uneasy feelings made Act I's titular climax all the more gratifying for me. As the battered soldiers slowly left the claustrophobic confines of trenches, congregating together as one mass of humanity at the stage's front that is No Man's Land, the entire stage lighted up in a brilliant display, as if the theatre itself had joined me in exhaling a deep sigh of relief. Witnessing this marriage of design, staging, performance, and composition, all my accumulated tension at once slipped away.

After intermission, our leads face the fallout of their unusual truce. Here, punishments are levied and sacrifices made. While the institutional consequences prompted by a brief period of peace are engaging, the production's second act – which clocks in at nearly half the length of the first and consists only of falling action – never has the chance to reach the meticulously crafted level of tenderheartedness that allows Act I to soar.

Regardless, I was light on my feet leaving Dell Hall. The unorthodox harmony of Act I lifted a weight off my shoulders, and it was replaced by the notion that meaningful peace – whether across trenches or within one's own body – is rarely impossible. Funny that an opera where audiences are plunged into hell on Earth at the outset would provide a sense of tranquility that lasted days after attending.

A version of this article appeared in print on February 1, 2019 with the headline: Peace's Release