Amanda Jones and Chad Hopper let the Rert ones in 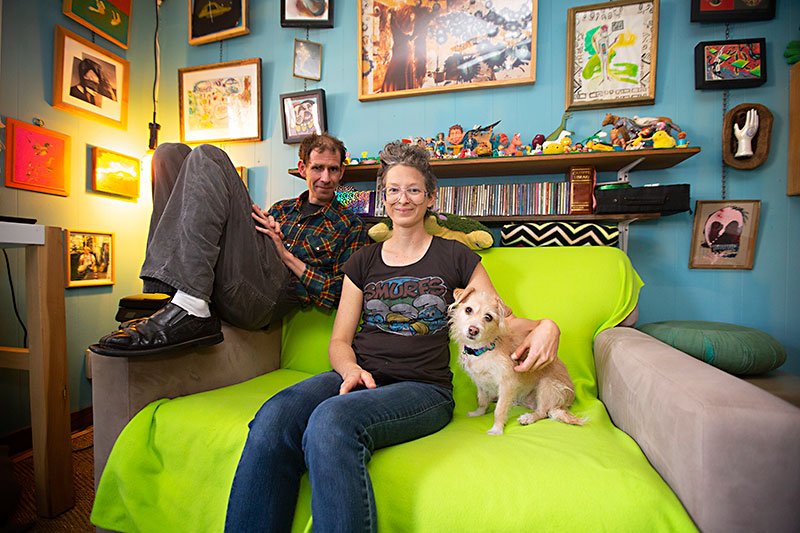 Certainly not Amanda Jones and Chad Hopper of Collection Rert. And that makes perfect sense, as proclaiming this city's lack of weirdness would be, for them, an act of self-denial.

Jones and Hopper started Collection Rert, as it exists today, almost two years ago. According to the venue's website, it's "a not-for-profit art space dedicated to creating uncommon cultural experiences and providing opportunities for artists to experiment."

But what does that mean, exactly? Besides mounting a new art show every month – or even more frequently than that – right in the place where you live.

"We just wanted to create a space where you can do whatever you want to express yourself," says Hopper. "We don't have, obviously, a large house. But we were willing to sacrifice that one room. It started out sort of as a joke, like 'What if we turn one of these rooms into a gallery, ha-ha-ha.'"

The vibe of Collection Rert is similar to that of Jen and Scott Webel's long-running Museum of Natural and Artificial Ephemerata, but where the MNAE is more of a scholarly natural-history-and-oddities display, Rert is predicated on an intentionally free-form, do-it-yourself-and-be-creative-AF aesthetic.

This has resulted in such exhibitions as last year's "We Work With Wood," a show that celebrated wood and the art that can be made of it when power tools and sandpaper are in the hands of women; "In the Dark," where the artists were asked to create something in complete darkness and then conceal it from themselves while delivering it to the gallery; and "Mortality in Plain Sight," in which Jessica Nixon created mixed-media versions of those sadly ubiquitous memorials erected by the newly bereaved along this nation's dangerous motorways.

“I think meeting new freaks is my favorite part of having the gallery,” says Hopper.

"I think meeting new freaks is my favorite part of having the gallery," says Hopper. "Because I don't get out of the house very often. In fact, I was a little worried about the social aspects – all these receptions – because I can be pretty reserved. But I think I've done well. I make rounds, then I go hide in the bedroom for a while, and it works out."

"I'm the more social side of the partnership," says Jones, "and I've been doing more of the administrative stuff – like applying for a grant from the city. So it's not in my hands yet, but I've been pretending like we already have the money and can offer stipends to artists."

"Getting grant money is nice," says Hopper. "It's nice to be able to pay people for their work."

And how does a thing like this – a venue, a partnership, a creative situation – begin? How did Jones and Hopper meet in the first place?

"The name comes from Sam, too," adds Hopper. "He used to talk to himself a lot, and 'rert' was just something that he said."

"I had just moved to Austin in 2005," says Jones, "and Sam was living on 37th Street, in this crappy upstairs apartment. But he's a really different thinker, and he and some friends decided to start having shows there – and there was space in the backyard where he'd have friends play music. And they started doing weird art shows. 'Hot Girls Barfing' was one. And Chad and our friend Chris had a two-person show there." 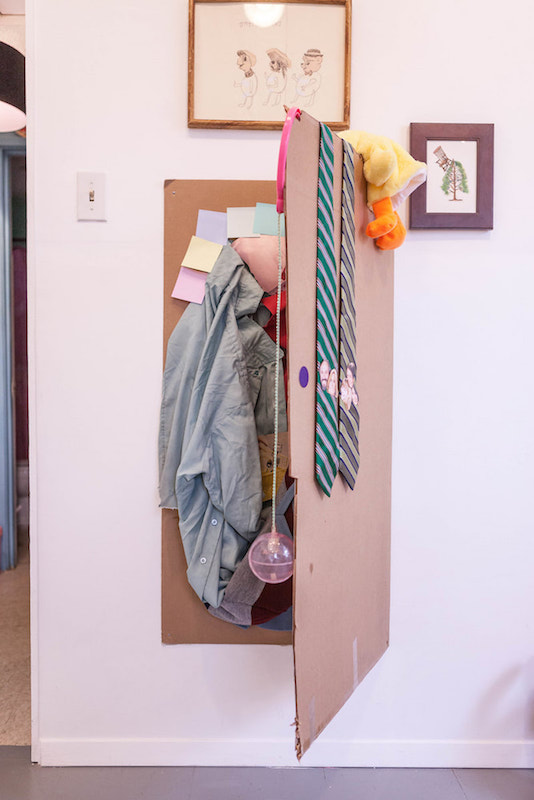 "I was doing Science Bear Arcade at Spider House," says Hopper. "Science Bear is a microgallery, just a little crate of homemade wares and fun junk, one of my Palfloat projects – it won a 'Best of Austin' in 2004 – and Sam came and told me about wanting to start a little gallery in a garage apartment, and I was like a hundred percent yes. And out of that came the band we started: Night Viking. We're still together, but we don't play out nearly as much."

"I started out as the puppeteer for Night Viking," says Jones. "There have been other bands doing that. In Chad's band before that one, Basic Shapes, Erica Nix was the performance artist. She did an aerobics routine that ended up leading to exhaustion and smoking a cigarette and, like, cramming a bunch of food down her face, or making out with it or something." She grins, remembering.

And that creative crossover, says Jones, is where a lot of Collection Rert's participants come from to this day. "There's a lot of musicians who are artists. And there's a lot of people we know who are just artistic, and maybe they don't do art in galleries around town, but they're at the top of our mind. Jieun Beth Kim is gonna have a show here – she's from South Korea, but she lives in Austin. And our friend Silky Shoemaker is having a show, too, in March. She doesn't live here anymore, but she's intricately tied to Rert – she inherited that old apartment after I moved out of it – and she always comes back, and she's a really great visual artist. And I'm excited about our next show here in February. It's called 'Double Date,' and it's gonna be four friends of ours, and they're going to decide what to do with the room. And they can do whatever they want."

"That's the exciting part," says Hopper. "You don't know what you're gonna get."

But with so many friends and friends-of-friends involved, isn't the Rert microcosm, no matter how thriving, a bit too familiar? Doesn't it seem, at times, almost incestuous?

"We're consciously reaching out more to the community," says Jones, "to people we don't already know. I'm interested in possibilities of partnerships with people like Six Square. Because we're in the Black Cultural District of Austin, and since I've lived here I've watched the neighborhood change so much, and I'd like to find a way to represent more of the indigenous population of East Austin. We'd like to have guest curators, sometimes, too."

And what is it that keeps Jones and Hopper, grant money or not, spending time and effort on Collection Rert, on all this constant making and enabling, year after year? What is it about the whole creative endeavor that –

"I come from an artistic family," says Jones. "My mom was always encouraging art. Her approach to it is, 'There are no mistakes in art,' and that's always been really empowering to me. People can become empowered through finding their creative voice – and once you have that, you can do anything."

"I'm glad we've done this," says Hopper. "I'm not bored or tired of it – I think we've paced ourselves better in the second year. It would be weird to get burned out about art." He considers this, looking around the oddly adorned living room that's adjacent to the gallery. "Yeah," he says, nodding, "that would be a foreign feeling."

A version of this article appeared in print on February 1, 2019 with the headline: Let the Rert Ones In