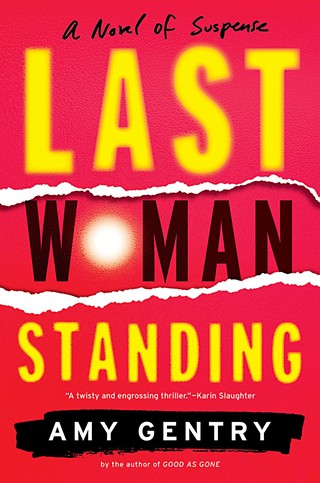 I'd wager there are few people – few women, especially – who don't have a hit list lingering in the backs of their brains these days. Sure, you might have in mind some high school bullies, bad bosses, folks who cut you off in traffic, but top of the list? For me, it's the people who have hurt my friends, the men who've made me feel unsafe as I navigate the world, and the known predators and abusers that continue to profit and win accolades because, well, we'd all just rather separate the art from the artist.

It turns out I've got some grudges in common with Dana Diaz, the protagonist of Amy Gentry's second novel of suspense, Last Woman Standing. A Latina stand-up comic from Amarillo about to compete in the Funniest Person in Austin contest, Dana's treading water. She's smarting from a split from her childhood friend and writing partner, Jason, that left him in L.A. and sent her back to the Lone Star State; she's blocked for new material at her nothing retail job; and she hasn't told anyone about her recent trauma: getting sexually assaulted by a beloved male comic at a meeting where he was supposed to be discussing a job opportunity with her.

Her trauma from this and an older assault – and her frustration working in an industry where she's constantly discounted as a woman of color – is at a low simmer at the outset of the novel. It's a happenstance meeting with Amanda, a woman who sees Dana perform while dealing with a lewd heckler, that turns up the burner. Amanda, with her own experiences of misogyny and abuse, spies a kinship with Dana – and through that kinship, an opportunity to give Strangers on a Train a try.

There's only so much that can be discussed from that point forward while dodging spoilers, but be assured there's a hearty handful of genuinely surprising and satisfying turns on the other side of Dana and Amanda's bargain. This is a read-in-one-nighter with a you've-eaten-12-too-many-chocolate-covered-espresso-beans jangling buzz. Of course it's timely, but it also feels lazy to resign it to that box just because we can immediately recognize allusions to real people – women have always been made to feel endangered, and they've always been angry about it. What's so elegant is the way Gentry skirts around giving us easy answers about what morality looks like in a system this broken. What's justice? What's vengeance? What's revenge? We need to keep our eyes peeled, her novel insists, because they're three very different things.