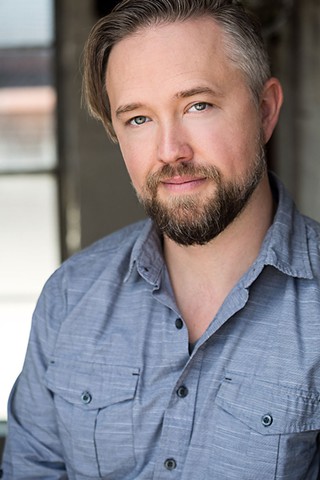 To most of us in this country, wars are distant things – conflicts fought in faraway lands, involving people we don't know. That is, until they aren't.

The United States had been at war in Afghanistan for five years without it meaning much to Gabriel Jason Dean. He and his wife Jessie were busy making theatre in Atlanta, Ga.

"It wasn't until I was holding my sobbing brother-in-law that a conflict in Afghanistan was personal to me. Before that, the only thing I knew was that we were there with troops on the ground as a result of 9/11." In 2006, however, the young woman that Jes­sie's brother Nolan had been dating – Caro­line Mulgrew by name – was in a helicopter that went down between Kandahar and its destination point. Her father, a civilian contractor who built schools in impoverished places across the world, had brought his family over to Afghanistan for a summer visit, so Caroline's sister and mother were on the chopper with her when it crashed. They all died. The Taliban claimed responsibility, as they commonly do when there are casualties, especially American ones. But though it was later discovered that the Tal­i­ban was not involved, that faulty maintenance by the helicopter company caused the crash, that didn't make it any easier for Dean to comfort his brother-in-law.

"I didn't know what to say to Nolan at that time," Dean says. "And any time I hit a wall like that, I typically reach to literature or research to learn as much as I can. So that's what I did. I started reading everything I could get my hands on [about Afghanistan], with absolutely no intention of ever writing anything about it. It was simply that I wanted to answer his question: Why did this happen?"

In the dozen years since, Dean has consumed books, articles, essays, and blogs in his quest for an answer. He's conducted interviews with people from Afghanistan, including a doctor who built a school there that he ran with the Taliban's blessing and a former bacha bazi (an adolescent boy who dances for and is often sexually abused by middle-aged men). Also over that period, Dean – who says he didn't consider himself much of a writer back in 2006 – has developed a national reputation as a playwright. It took just a few years after the crash for him to be named Atlanta's favorite playwright in the alt-weekly Creative Loafing; for his 10-minute play "Pigskin" to win at the Samuel French Off Off Broadway Short Play Festival; and for him to be accepted as a fellow in the University of Texas' Michener Center for Writers. Dean's theatrical output has run the gamut from literary adaptation (Beowulf) to theatre for young audiences (The Transition of Doodle Pequeño and Mario and the Comet) to personal drama (Qualities of Starlight and Terminus, both produced locally by the Vortex Repertory Company, the former a B. Iden Payne Theatre Award winner for Best Original Script). Dean has also used his connection to Afghanistan as a source for drama. While still at UT, he wrote a script titled Bacha Bazi (Boy Play), about an American documentary filmmaker as he encounters that Afghan tradition. (That play has since been reworked and is now titled In Bloom.) This week, Dean returns to Austin and the Vortex with his second play to explore what he's learned about Afghanistan, Heartland, which is currently in the midst of a National New Play Network rolling world premiere.

“To be totally honest, I was terrified of writing this play,” Dean admits. “And I’ve since learned that what Steven Dietz once said in grad school is in fact true: If it scares you, you have to do it.”

Heartland was partly inspired by articles in the Los Angeles Times and The Washington Post that Dean came across while researching Bacha Bazi/In Bloom. They revealed that in 1984 the U.S. Agency for International Development and the Central Intelligence Agency had commissioned the University of Nebraska's Center for Afghanistan Studies to create textbooks for Afghan schoolchildren that contained violent images and militant Islamic teachings – essentially jihad propaganda intended to stimulate resistance to the Soviet occupation of the country at the time. Dean says he had "a strong visceral reaction" to the discovery and knew that he wanted to write about the propaganda effort, "but had no idea what it would be. So I put it in the proverbial drawer hoping to resurrect it at some point." That point came a few years ago when the National New Play Network solicited pitches for its Smith Prize for Political Theater. Dean worked out his idea for the script, and though his pitch didn't win the prize, Seth Rozin at InterAct Theatre in Philadelphia heard about the script and commissioned Dean to write it. For the playwright, it was an opportunity mixing excitement and dread. "To be totally honest, I was terrified of writing this play," he admits. "And I've since learned that what Steven Dietz once said in grad school is in fact true: If it scares you, you have to do it."

One thing Dean was certain of was that he "didn't want to make it a 'political' play, but rather a play that was very personal – a chamber play about people living out unfortunate political decisions." That reflected to some degree the event that drew Dean to Afghanistan in the first place, and he wove elements of it into his play, which was built around a triangle: a University of Nebraska professor of literature; his adopted Afghan daughter who has died delivering aid in her homeland; and the Afghan man who then comes to the U.S. to deliver the news – and her books – to her father. It meant having the play move between present and past, between the Midwest and the Middle East, and bouncing around in time and place, says Dean, "is always challenging, it seems." His exploration of the personal also led him to play with language, to the point of including lines in the Afghan language of Dari.

Working so far outside of his own cultural and personal experience led Dean to "invite many more collaborators inside the play while writing it," he says. One was Humaira Ghilzai, a dramaturg based in San Francisco whom he'd met while developing In Bloom. She came on board Heartland at the outset, doubling as dramaturg and cultural consultant, and providing the script's Dari transliterations. "In the past, with my plays like Qual­i­ties of Starlight or Terminus, by the time I am working with collaborators I am pretty much an authority on the play," says Dean. "But this has been very different. Now, I want to work this way all the time!" 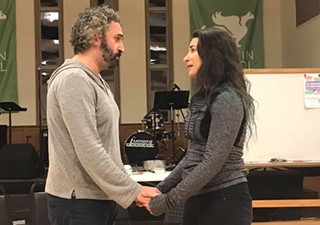 In addition to the challenge of making more space for collaborators, this play has given Dean the challenge of being "super-vigilant" in his research. He calls Heart­land "different than In Bloom in that it was based on true events, so I felt that I needed to know as much as I possibly could about these textbooks and how they were made and distributed. When I started writing this play in 2014, there wasn't a lot of information available. I was lucky to be doing the Hodder Fellowship at Princeton that year, and I used the resources there and the institutional name behind me to get into a few doors with scholars who knew much more than me about the subject. I found that one particular scholar, Dr. Dana Burde, was literally writing the book on these textbooks at the same time I was writing this play. I did not get the chance to meet her or read her book until after a few drafts of the play had been written, but eventually we did meet, and her book and her work were both incredibly illuminating and helpful."

Those challenges might have seemed enough for Dean in writing Heartland. But the playwright set one more challenge for himself, one maybe bigger than the rest: to turn down the volume. "I wanted this play to be quieter," he says. "I had been working on Terminus and In Bloom steadily as I led up to the writing of this play and both of those are pretty epic in scope and form. I wanted to do something that, while epic in a larger, real-life context, was ultimately subtle and quiet onstage. Since the play is literally and thematically about omission, it felt like silence and the space between the words, or that space that exists between the audience and the play, that mysterious real estate was where I wanted to aim."

In that mysterious real estate, perhaps a war wouldn't feel like a distant thing but would be brought home.

A version of this article appeared in print on January 18, 2019 with the headline: Home Front