Sugar, Water, Purple: Can We Kick It? at ColdTowne 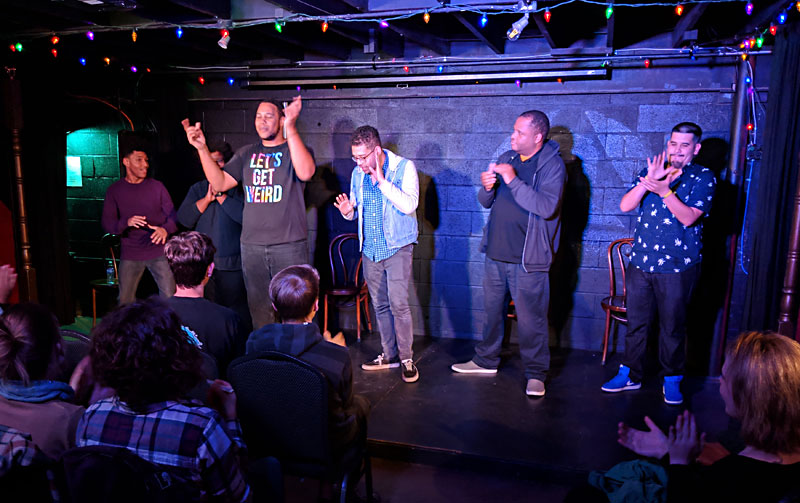 Having spent this past year engaging with theatre by (and for) marginalized groups, I've grown an appreciation for the fellowships these productions inspire. A platform for representation in the arts allows disenfranchised creatives to make meaningful connections with one another, providing unwavering support in the faces of both success and failure. Unsurprisingly, this sort of fraternity makes for damn good improv – as evidenced by ColdTowne Theater's weekly showcase Can We Kick It?

This current residency in ColdTowne's Wednesday, 8:30pm time slot is hosted by "Austin's first marginalized improv troupe," Sugar, Water, Purple. Assembled by creative Kenah Benefield, this group lends a unified voice to some of the city's most prolific black improvisers, including the first graduate of Austin's five major improv schools, Chris Villafano. The evening I attended also featured a special guest performance by Y'all We Asian, the collective of entertainers of Asian descent that received the 2018 Ethel Hinkley Award for Outstanding New Improvisational Troupe from the B. Iden Payne Theatre Awards Council – an honor bestowed upon Sugar, Water, Purple one year prior.

Kicking off this night's showcase was ColdTowne's own Kinkade, whose brief opening set featured side-splitting displays from community favorites Nathan Sowell and Emma Holder. They were followed by Y'all We Asian, who used the audience suggestion of "zoo" as the setting for bizarre tales of unscrupulous businessmen, tense family vacations, and freedom-hungry lions. The gracefulness with which the group's members functioned as a crew was striking. Most apparent in scenes involving standouts Kim Tran* and G-Su Paek, the chemistry these improvisers shared allowed for the seizing of many unique comedic opportunities.

One unusual aspect of this set, however, was how often the performers laughed at their own jokes. While this seems like a potential detraction, oddly enough, I found these occasional character breaks entertaining in much the same way a movie's blooper reel can inspire infectious laughter. A troupe having as much fun as their audience can be quite endearing. As Y'all We Asian left the stage, I found myself smiling as if I had spent an evening catching up with my funniest acquaintances.

In closing the night, Sugar, Water, Purple's six members built a set around the unique audience suggestion of "dementia." Starting things off was a freestyle rap by Symply Courtney that, despite a gleefully off-color chorus ("When I say 'dementia,' you say 'Huh!'"), showcased this affable comedian's apt lyrical prowess, creating an energetic rhythm for the vignettes to come. Following Courtney's rap, the full group returned to the stage and began their show from the top (as if the past 10 minutes were forgotten), introducing themselves once more before spilling into the crowd and hounding audience members for suggestions.

To me, this fourth-wall breaking, improvised déjà vu encapsulates what makes Sugar, Water, Purple so captivating: a willingness to commit to ambitious ideas as a group, no matter how unconventional they may seem. Rather than aiming for a cheap laugh every 30 seconds, these improvisers are willing to let comedic premises gestate, growing them as a unit until they either soar spectacularly or hit a dead end. Thanks to moments like these, the group earned the night's biggest laughs by far but also delivered a few of its rockiest moments. Still, the way that Sugar, Water, Purple's members steadfastly stand behind each other, allowing one another to step off the beaten path and explore new comedic opportunities, makes this seasoned troupe well worth engaging.

As I left my last theatre show of 2018, I felt a renewed appreciation for the human connections that create memorable improvised theatre. Not escaping me was the irony that two troupes historically denied representation in improv both exhibited a powerful understanding of what makes the art form so endearing.

Sugar, Water, Purple: Can We Kick It?


Editor's note: This article has been updated to correct the name of Y'all We Asian performer Kim Tran.

A version of this article appeared in print on January 4, 2019 with the headline: Sugar, Water, Purple: Can We Kick It?