The holidays may be over, but you can catch this iconic stretch of Austin oddballness for a few more days

If you moved to Austin within the past decade, you probably know the Trail of Lights as the city's premier holiday hot spot, but you may be less aware of another yuletide illumination tradition that's been a staple for almost as long: the 37th Street lights. Specifically, it's the stretch of W. 37th Street in the North University neighborhood between Guadalupe Street and Home Lane, which – starting in about 1980 – brought a funkier sort of Christmas cheer by way of copious strands of lights and decorations decking out nearly every house on the street, easily walkable or drivable for most of December.

The lights literally dimmed in 2008 when the original creators – a loosely organized group led by former resident Jamie Lipman – moved away. But after two years of attempted revival, the spectacle returned almost full-force this winter thanks to the combined efforts of spirited millennials, several lingering old-schoolers, and the power of social media. As a Hyde Park native himself, "Snapshot" was eager to revisit the old, familiar stretch, which burns bright through Jan. 5. (See full photo gallery.) 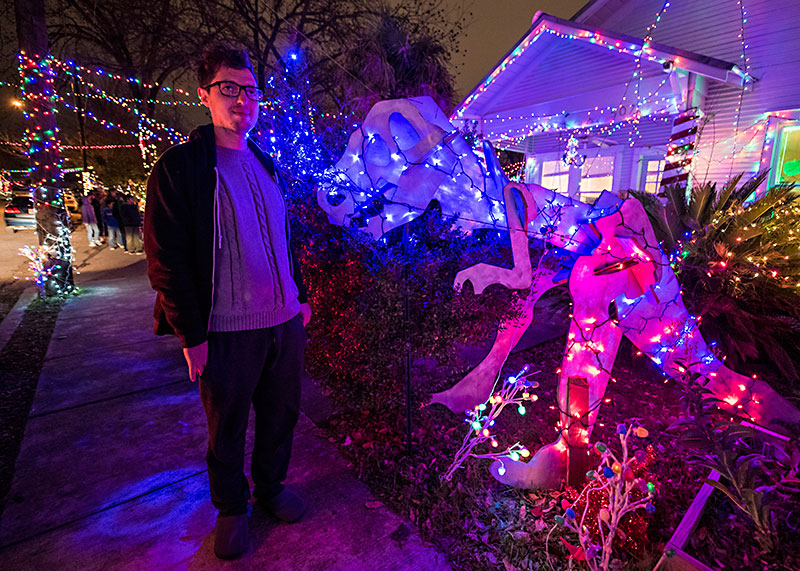 Native Austinite Robert Foster, 29, who has lived near the street's Guadalupe end since 2015, was largely responsible for rallying neighbors (via tacos and beer parties; how else?) and attracting visitors with a new Facebook page. His handcrafted T. rex (pictured) is an homage to a larger dino that resided at the same spot when he was a kid: "It's not what you're expecting," he says of the outsized lawn ornament. "Pretty much a solid hit with any 7-year-old." 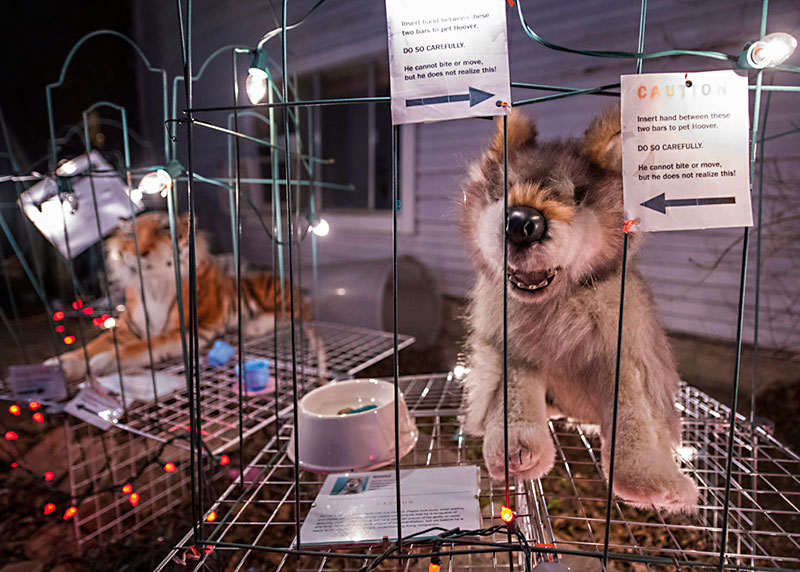 A quick stroll down the driveway next door and you'll find a stuffed animal petting zoo. You can actually apply to adopt the cuddly critters via intake forms on hand. 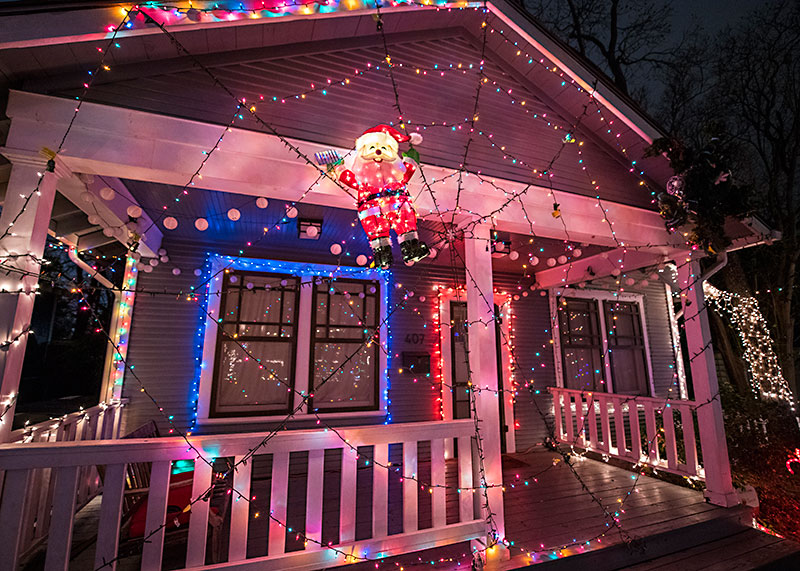 "I think the secret this year, why we have a little bit more than previous [years, is] there's a little bit more of that one-upmanship," says Foster, who mentioned as an example this spiderweb-with-Santa-ensnared setup down the way. "It's a weird alternative for everyone that doesn't fit into the normal Christmas mold, who doesn't enjoy going to see a house covered in white with a little baby manger in the front." 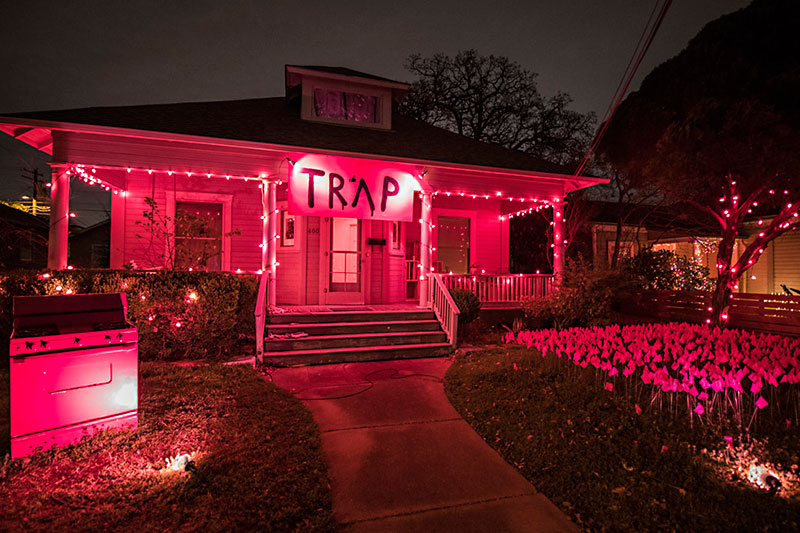 Though plenty of secular showiness still abounds (some might remember the Flying Spaghetti Monster prevalent throughout the Nineties), things have clearly evolved. Case in point: this home's trap music-inspired display (yeah, that's rapper 2 Chainz in the window). 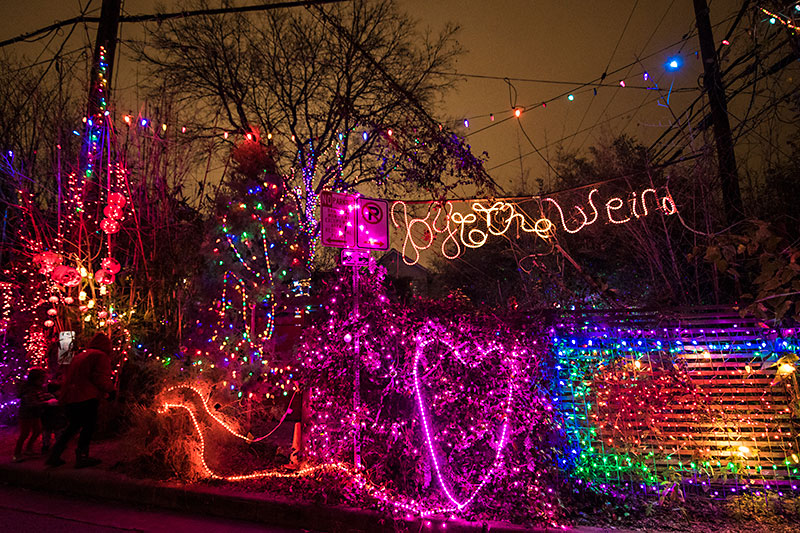 Fittingly, the attraction's longest-running residents, Tracy Firsching and Brian Birzer (involved since '99), occupy the final stop just around the bend at Home Lane and 35th Street. Its sprawling schemes, including a psychedelic tunnel and sock monkey nativity, strive to evoke an old-school spirit when, as Firsching describes it, "you get that little tingly feeling and you're like, 'Ah yeah ... Austin still does have the magic!'" 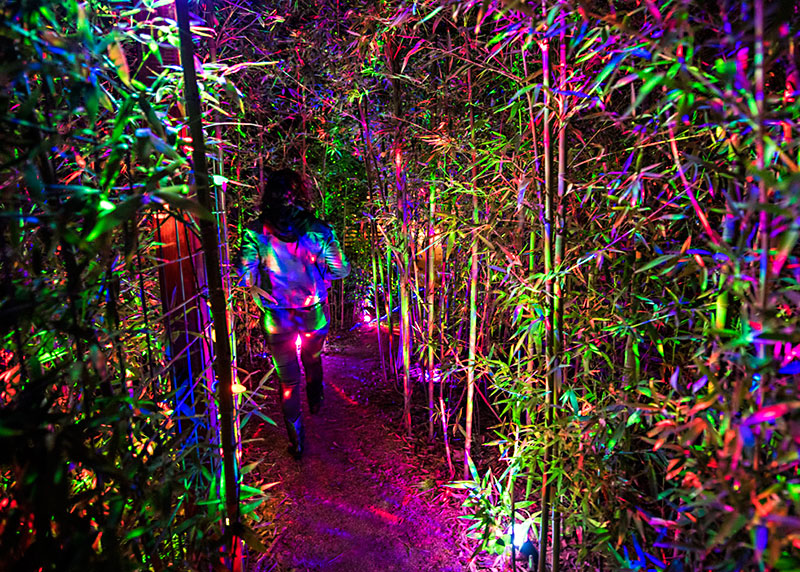 That tunnel, a bamboo-shrouded path marked by "hiking trail" signs, inspires wonder and confusion: "I was just following people through the trail [and] there was this kid in front of me," Birzer recalls, "and he's like, 'Is this real?' So I guess if we were able to make an 8-year-old kid question reality ..." Firsching finishes the sentence: "... our job is done."