Top Books of 2018 That Make the Past Present 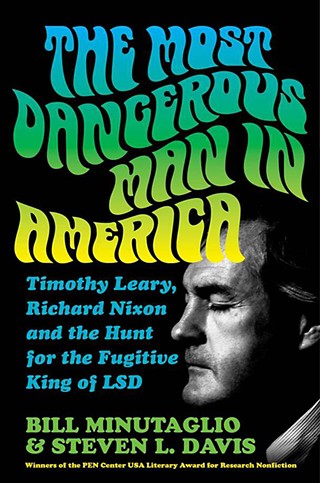 The Most Dangerous Man in America: Timothy Leary, Richard Nixon and the Hunt for the Fugitive King of LSD (Twelve) Leary, the guru of mind expansion, vs. Tricky Dick, clammy-handed paranoiac would-be dictator. Sure, you thought this book might be a romp, but in the hands of Bill Minutaglio and Steven L. Davis, the true-but-really-weird saga is a warp-speed revolution-and-heist film. It's a real page-burner, if you know what I mean.

The Largesse of the Sea Maiden (Random House) When is the last time I saw a room full of writers crying? No, it's not an ironic joke, I'm talking about the memorial for Denis Johnson, the essayist, novelist, and poet who died May 24, 2017, far too soon. This was his last collection, written in the blinding light of his last days. Some stories here sing as resoundingly as his best work, which was good enough to stop traffic – you'd go back to reread passages over and over, letting them play in your mind like hit songs. We're going to ache from this a long time.

Berlin Book Three: City of Light (Drawn and Quarterly) The final installment in Jason Lutes' insanely brilliant graphic novel series about Berlin during the Weimar Republic years follows a mix of historical and fictional characters, including art students, poets, black American jazz musicians, leftist writers, fascist agitators, and thugs. You'll come to like and admire many of them and struggle to understand others. Do they live or die? Lutes doesn't say. When I turned the last page of the book, it felt like I had left them in the dark to meet their fates.

The Mars Room (Scribner) Rachel Kush­ner is one hell of a writer. This novel is nominally about women in prison, but it could have been about men in prison, or unwanted dogs and cats – any kind of living being that seems to have been born to make mistakes and suffer punishments that bear no relation to any sane notion of justice. Did I mention that the story is set in America?

I also celebrated the publication of My Struggle: Book Six (Archipelago), the final installment in Karl Ove Knausgaard's heavyweight series with that other famous poet of the quotidian, Marcel Proust; November Road (William Morrow), Lou Berney's rip-roaring joyride noir set in the surreal days after the Kennedy assassination (and like I've told you a million times, Carlos Marcello hired the shooter from New Orleans and Lee Harvey Oswald was a patsy, just like he said); and Metamorphica: Fiction (Farrar, Straus and Giroux), by Zachary Mason, a computer scientist with a gift for retelling Greek myths in short, acerbic, and often really humorous bites. By the way, I was joking about Carlos Marcello. I happen to like the Warren Report, OK?