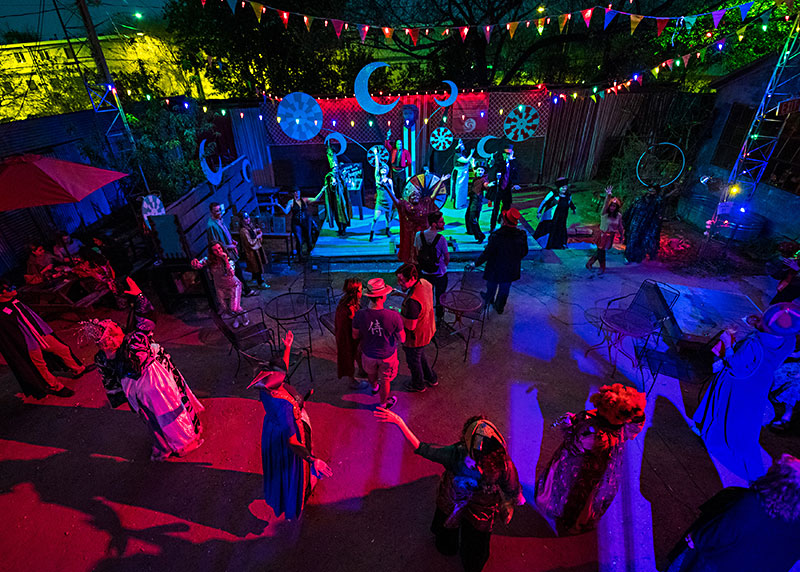 1) PERFORMANCE PARK (Vortex Repertory Company) Producing Artistic Director Bonnie Cullum marked her company's 30th anniversary with a celebration of everything Vortexian – its space, its artistic family, its love of myth and ritual, and its audience – in a sprawling, immersive theatrical game that we all were invited to play. A singular triumph of imagination, community, and generosity, in the best spirit of Austin.

2) THE WAY SHE SPOKE: A DOCU-MYTHOLOGIA AND (UN)DOCUMENTS (Vortex Repertory Company) Two solo shows, both confronting issues of the border and identity in the most personal terms, both potent in their imagery and deeply moving. In a year thick with theatre making the political personal, Jesus I. Valles' (Un)Documents and Isaac Gomez's The Way She Spoke left the most powerful, indelible impressions.

3) WE ARE PROUD TO PRESENT A PRESENTATION ABOUT THE HERERO OF NAMIBIA, FORMERLY KNOWN AS SOUTHWEST AFRICA, FROM THE GERMAN SUDWESTAFRIKA, BETWEEN THE YEARS 1884-1915 (Street Corner Arts) We began by laughing at artsy theatre types devising a new piece, but when that piece took a turn into the dark heart of white racism, it was no joke. Liz Fisher's taut staging and the cast's above-and-beyond commitment to the script led to the year's most disturbing ending, one that left the audience in a stunned silence – a long silence.

4) *SOME HUMANS WERE HARMED IN THE MAKING OF THIS SHOW (En Route Productions) CB Goodman's show was a high-wire act, balancing a mocking look at the self-improvement racket, staged with gleeful verve as a circus, and a sobering meditation on actions and consequences. Amazingly, it managed both and bonded its audience as much in silence as laughter.

5) ONCE (Zach Theatre) The beat of the music became the beat of my heart in Dave Steakley's winsome production of the indie-film-turned-staged-musical. Songs flowed from the sterling band of performers – all doubling on instruments and vocals – as naturally as breath, and every one was as warming as whiskey and healing, too.

6) ROB1N (Summer Stock Austin) / TORTOISE AND HARE (Zach Theatre) Two winners from the irresistible musical team of Damon Brown and Allen Robertson, with the new heist-flavored update of Robin Hood and the revived reboot of Aesop's amazing race both using delightful wordplay, irreverent humor, jump-rope dances, and some of the sharpest show-tune rap this side of Hamilton to inspire us to look out for each other and work together.

7) ECHO OF THE REFUGEE ... ME? (ZM3 Live Productions) Zell Miller III's outrage over the state of the city – especially the Eastside – was fired off in piercing, passion-fueled spoken-word segments and character speeches as necessary for Austin to hear as they were fiery. Even with scorched ears, I'd listen to them again in a heartbeat.

8) THERE AND BACK (Ground Floor Theatre) Raul Garza's timely drama let us spend six decades in the company of a Mexican émigré to the U.S., and thanks to the space Garza and director Patti Neff-Tiven gave Karina Dominguez to be in the character's skin and to her deep, intimate performance, it was time very well spent.

9) JUDD FARRIS Everywhere I turned this year, there he was, and in every role this actor laid everything on the line. With his commitment, honesty, and humanity in Your Mother's Copy of the Kama Sutra, We Are Proud to Present ..., and The Repentance of Saint Joan, he made the shows better. And in Booth's Richard III, he made the show.

10) NEVERMORE: THE IMAGINARY LIFE AND MYSTERIOUS DEATH OF EDGAR ALLAN POE (Doctuh Mistuh Productions) A giddy nightmare whirl through the tortured existence of the horror writer, its exuberant ensemble, Tim Burton-esque designs, and inventive staging by Michael McKelvey made the eerie elegant, the macabre marvelous.

UNTIL THE FLOOD (Theatre en Bloc)