The Austin Chronicle staff photographers choose their favorite photos of 2018 "On Aug. 18, roughly 400 counterprotesters confronted about 40 supporters of Donald Trump at the Texas state Capitol during the March Against Far-Left Violence. While counterprotesters attempted to disrupt the rally with noise, state troopers kept the two groups apart. As a photographer who looks for moments at protests that go beyond simple sign-holding, I was drawn to the facial expressions of each person in the photo while they look toward the Trump supporters, some of whom expressed support for white nationalism along with other alt-right sentiments." (See John Anderson's Top 10 photos of the year.) "The opening of Pride at Rain on 4th. Let the party begin! I've begun to really want to document my own community here in Austin. I recently was on a panel at the Austin History Center that looked at the photography of an ex who shot the lesbian punk scene in the Eighties. I've always made images of our community, but I've never thought, 'I should make an effort to bring out what I see when I'm in the community.' When I see this image, I see my people, as we do things, among ourselves in all our fabulousness. There will be several more images from the gay community in Austin in my 10 best this year – and probably for many years to come." (See Jana Birchum's Top 10 photos of the year.) 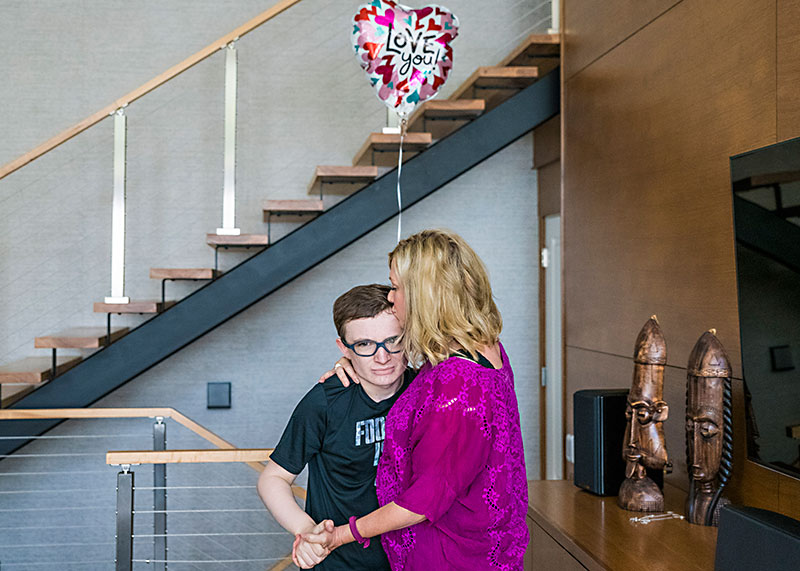 "This photo comes from my April 20 'Snapshot' column, which focused on the progress of the first patients prescribed legal CBD treatment (for intractable epilepsy) in Central Texas. I was invited into the home of Debbie Tolany and her 14-year-old son Miles – who is also nonverbal and suffers from pain stemming from various other disorders – to capture images during administration of his medicine. Miles began to act out aggressively as his mother tried to sit him down for a photo; this moment of peace and love between them lasted only a couple of seconds, but to me perfectly illustrated the positive potential of embracing this frontier medicinal practice." (See David Brendan Hall's Top 10 photos of the year.)

Find full galleries of our staff photographers’ top 10 photos of the year at austinchronicle.com/photos.