In James Ijames' satirical portrait of the artist as a privileged white guy, a black woman provides the most vivid and interesting shades Gus may paint abstracts, but in trying to get one into a major survey of American art at an A-list museum, he creates a naturalistic self-portrait – of white male privilege.

Alas, this isn't something the artist renders purposefully on canvas. Rather, in the play White, it comes out in his own behavior when Gus is refused a place in the posh Parnell's "New America" exhibit, curated by his grad-school friend Jane. She's using the show to make space for artists who have been historically marginalized by art institutions, so white dudes need not apply. Gus' plea that he's marginalized, too, since he's gay, cuts no ice with Jane. On her scale for evaluating artists to include, Gus' sexual orientation doesn't come close to balancing his advantaged gender and race. Gus then responds by quoting chapter and verse from the Entitled White Guy Bible: I deserve to be included on the strength of my talent. Shutting me out is reverse discrimination. I'm being silenced. These comments are cringe-worthy enough when he makes them to Jane, who's also white, but when he spouts them to Vanessa, who's African-American, and Tanner, his Asian-American boyfriend, they're – pardon the pun – beyond the pale.

Playwright James Ijames slathers on Gus' elitist self-justification like van Gogh laying on oils with a putty knife and with just as much of an edge. Ijames, himself African-American, has made an image of a white man consumed by his own status and privilege. In a sense, the play is a painting, with Gus filling an inordinate amount of space within the frame – i.e., the art world – so the other figures in the composition, all women and people of color, are forced to the edges. Not surprisingly, the most prominent color is white – also the predominant hue in Gus' paintings, which, he says, explore his "whiteness" – and everything Gus sees is filtered through white. While every figure shown is recognizably human, most are sketched in broad strokes for comical effect. The point here is serious, but Ijames clearly wants us laughing.

Director Delanté G. Keys uses his ample experience acting in sharp-edged comedies (*some humans were harmed in the making of this show, Small Mouth Sounds, Catalina de Erauso) to home in on White's satirical sensibilities and encourage the sort of heightened performances that draw laughs. Heidi Penix lets Jane's art-world jargon roll around in her mouth like champagne from the flute she holds at an exhibit opening. Atop a stepladder, Allegra Fox embodies Gus' patron saint, Diana (as in Ross), and gives herself over to full celestial diva-ness. And Chad Dike retains enough cluelessness about Gus' overblown sense of entitlement to read as comically outraged rather than repellent. Without that quality, Gus' elaborate scheme to get a painting into "New America" – hiring Vanessa to portray a fictitious artist who will pass off his work as the work of a black woman – would be irredeemably manipulative and selfish.

As it is, the plot remains far-fetched, and the reasons Ijames gives for Vanessa agreeing to go along with it aren't fully persuasive. But the play's satirical construct makes the strained credulity easier to dismiss, especially as it leads to Vanessa's deep dive into the task of inventing her alter ego, the vegan lesbian feminist artist Balkonaé Townsend. ("When," she asks Gus, "do you think I read Their Eyes Were Watching God?" "19?" he offers. "15!" Vanessa roars back.) Here, ideas of race and identity fold back on each other in multiple ways. A black woman is creating a new self with more power, a bolder and more liberated black woman, but she's doing it at the behest of a white man to further his career. So where is the line between her independence and her exploitation? Among the shifts in personalities and power, Oktavea Williams carefully charts the challenges of Vanessa's journey and her transformation into Balkonaé. Her character may take up less space in the play's composition than Gus, but she's where your eye is drawn. She gives White its most vivid and interesting shades. 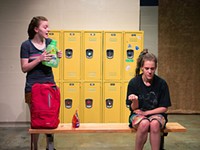 Permanent Record Theatre's Dry Land
With this production, this company makes a bold debut and a fierce statement about life for teenage girls