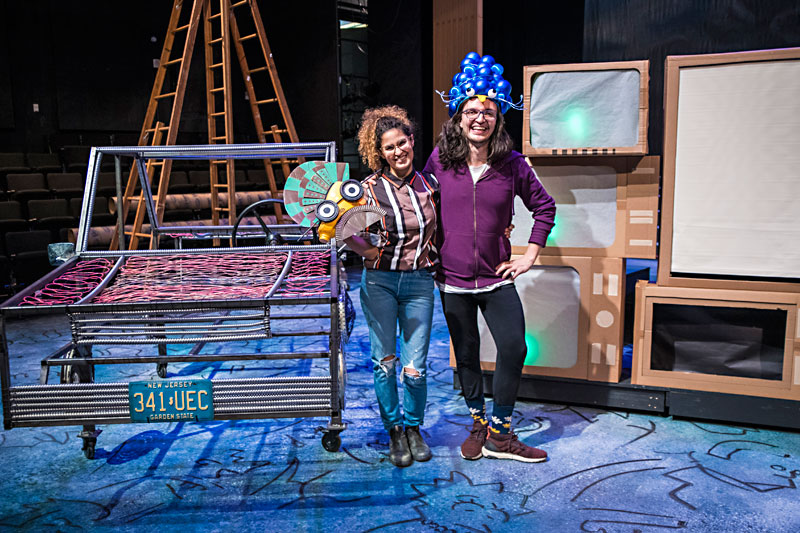 At one time in contemporary pop culture, the Simpsons were ubiquitous – the First Family of Television. Homer feasts on doughnuts at his job as a nuclear power plant safety technician before boozing it up at Moe's Tavern. ("D'oh!") Bart preps for his future as a criminal recidivist. ("Don't have a cow, man!") Lisa skips meat, toots on her sax, and protests everything under the sun. ("BAAAAAARRRT!") And Marge, when not chasing her subplots, is keeping (occasionally homicidal) baby Maggie in pacifiers. ("Mmmmm ... .") Even if the series jumped the shark decades ago, The Simpsons remains ageless and endurant. Much like the threat of nuclear annihilation, however, series villain C. Montgomery Burns remains a lingering, omnipresent hazard to the stability of Springfield. ("Release the hounds!")

You could also say that's what he represents on a global scale in Anne Washburn's award-winning three-act play, Mr. Burns, a post-electric play. The story takes place in a postapocalyptic America and unfolds in three time periods: the edge of tomorrow, seven years beyond there, then 75 years after that. At its core is a group of survivors re-creating live stage versions of Simpsons episodes, in particular "Cape Feare" (Season 5, Ep. 2), wherein Sideshow Bob once again tries to murder Bart. The show is a fascinating examination of how storytelling evolves over time, often in reaction to external circumstances. In this reality, stories are just as much commodities as they are sources of faith.

Mr. Burns has been staged several times in Austin, but in mounting the play at the UT Department of Theatre & Dance, co-executive producers and graduate students Khristián Méndez Aguirre (director) and Iman Corbani (scenic designer) wanted to do something different. They're staging a zero-waste production that's also very conscious of ideas of social justice, equity, and collaboration. During an in-person interview, the duo – who have worked together before – displayed a finish-each-other's-sentences style of banter that terrifically reflects their working dynamic.

Iman Corbani: We wanted to work together from the day we met. We just clicked.

Khristián Méndez Aguirre: I think both of us as artists are interested in work that challenges audiences in different ways. My bachelor's degree is in ecology and I have a background as an environmental activist, but one thing that kills me about environmental theatre is when it gets preachy. Then it just becomes flat. So that's one of the things that's really rich about this play for both of us. It's like, the world is destroyed, but here's how theatre might help us survive that.

Austin Chronicle: How did you approach the play as a zero-waste project?

IC: I can talk about the design aspect. There are the three Rs: reuse, recycle, and reduce. So when I was designing, with every single scenic element and design, I'd ask myself: "If we build that object, is it gonna be reused? Can it be recycled? If so, how does reduction come in? Is it compostable?" It was a challenge within itself, because as theatre designers, we are not taught at all how to design in a sustainable way. You don't have classes that teach sustainability in theatre; in general, the arts are behind, compared to a field like architecture. They have classes, entire majors, dedicated to sustainability.

KMA: Iman is right. There are no courses in sustainability, I don't think, across the entire College of Fine Arts. At first, as part of this project, a course was going to be offered in sustainable design and fabrication, but it actually ended up being canceled because of lack of student interest.

IC: That's what we wanna influence, at least one course that teaches students how to design sustainably. William Bloodgood, my adviser and a teacher in the department, is inspired by what we're doing. He's interested in developing, and trying to introduce, a class, then curriculum –

“Our mission has always been proving that you don’t have to sacrifice aesthetic quality for being sustainable. Our dream is to make sure that you can also do shows like Death of a Salesman this way.”

KMA: – then a certificate.

IC: We tried to calculate the carbon emissions we produced. Sadly, we weren't able to with our time frame. We're not calculating the power of the tools we're using, which I'd like to do, but we've used a lot of hand tools instead of machines. We've also found alternative solutions to things where we usually wouldn't try to. Instead of using theatre weights, we used rocks. And we're just gonna put them back in nature when we're done.

KMA: One of the tricky things with this project is that it has so many elements to it: social justice, environmental justice, the play itself. But there's also the fact that it's student-led. According to the chair of the department, it's the largest student-led production [in the department's history]. We've looked to six different sources of support. Between that and departmental support, we've amassed a little over $75,000.

That's another thing, too. The only things that our show is doing differently are paying everyone who's involved and, in terms of materials, using roughly the same amount that would be used for mainstage productions. That was always one of the goals. We're essentially showing it can be done. You just have to look at your resources differently.

IC: But I've seen so much change happen already, just from us talking about it, then doing it. I think it's inspiring people.

KMA: As far as the actual twoish hours of the show, our mission has always been proving that you don't have to sacrifice aesthetic quality for being sustainable. Our dream is to make sure that you can also do shows like Death of a Salesman this way. Or how could we stage a Jane Austen period piece with zero waste? That's a show I wanna see!

A version of this article appeared in print on December 14, 2018 with the headline: Sustainability? Exxx-cellent!

Top 10 Instances in 2010 in Which I Hit My Word Count
Toasting 2010's most memorable performances, set designs, and directors