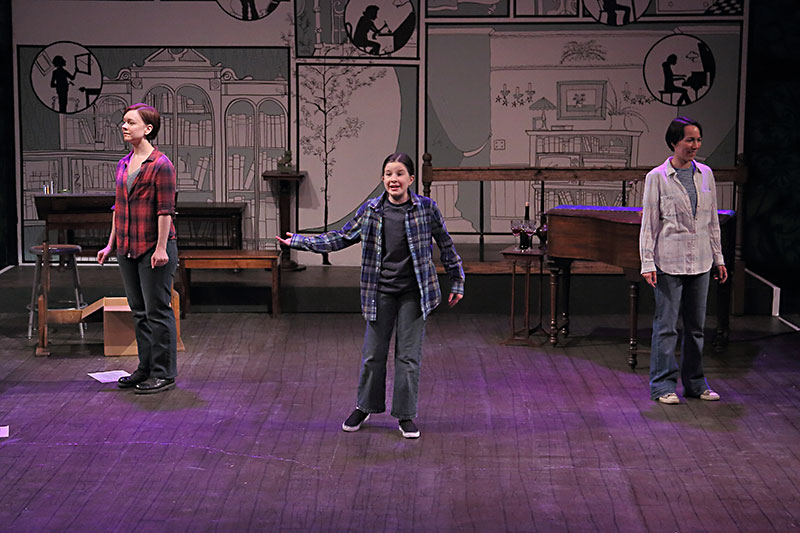 Considering how often adaptations of beloved literary works miss their mark (cough, Dark Tower, cough), Fun Home is a rare treat. The full-length musical adaptation of Alison Bechdel's sardonic, unflinchingly honest graphic memoir of the same name does little to water down the painful truths of its source material, making it perfect fodder for a company as ambitious as Ground Floor Theatre.

Fun Home follows Alison, a 43-year-old cartoonist, as she uses art to extract meaning from vivid memories of spirited adolescence, sexual discovery, and a complex relationship with her closeted, domineering father. The show's basic premise (as well as its darkly irreverent tone) is perhaps best encapsulated by the blunt, clunky caption the artist assigns her sketch at the show's top: "My dad and I both grew up in the same small Pennsylvania town, and he was gay and I was gay. He killed himself, and I became a lesbian cartoonist."

In the musical, Alison is portrayed by actors of three different ages, with the show's non-linear narrative guided by "Adult Alison," played here by Austin improv staple Sarah Marie Curry. Onstage for nearly the entire performance, Curry's Alison strikes a sort of omniscient presence, watching knowingly from her drawing board as reflections of herself as a naive, spunky 10-year-old (Mariela Denson) intertwine with those of herself as a frantic, wide-eyed college freshman (Taylor Flanagan). Experiences which at the time seemed downright confusing to Young Alison or unbearably frustrating to Middle Alison inspire sobering revelations within their adult counterpart – revelations skillfully communicated through Curry's command of subtle facial expressions and body language.

While three separate actors portraying a character's life journey is nothing groundbreaking, the keen attention to detail with which director Lisa Scheps approaches this dynamic is quite refreshing. Despite Middle and Adult Alison not once making eye contact, Curry and Flanagan's fluid blocking and reactive line delivery effortlessly convey a single entity, while maintaining more than enough variety between their performances to imbue the character of Alison with a believable depth.

Scheps' eye for character continuity is also evident in the emotional foundation laid by eighth-grade theatre prodigy Denson, who portrays Young Alison with an admirably mature understanding of the impact her experiences impart to her older selves. Denson's emotional maturity not only brings dramatic weight to "Ring of Keys," Young Alison's show-stopping musical celebration of self-discovery, it also enables actor Jim Lindsay to reach dizzying emotional highs in the demanding role of Alison's father, Bruce. As a result, the duo's painfully imperfect father-daughter relationship is intensely realistic and moving.

This issue, however, is lessened by Ia Ensterä's masterful set design. In keeping with the theme of Alison's utilitarian rebellion against her father's obsession with lavish outward appearances, Ensterä has crafted a minimalist, uncluttered set that fits the show's setting of the past not as it was but as it's oft remembered, leaving little in the way of distractions from the cast's powerful stage presence.

No doubt a casualty of its chosen medium, Fun Home's stage adaptation loses some of its source material's measured style. Regardless, the level of care that Ground Floor's cast and crew have invested in this production highlights just how true the musical remains to the spirit of Bechdel's memoir. Kept intact in Ground Floor's Fun Home are the types of hurt, frustrations, and emotional complexities that make Alison's story at once heartbreaking, empowering, and, perhaps most of all, familiar.

Ground Floor Theatre, 979 Springdale #122
www.groundfloortheatre.org
Through Dec. 22
Running time: 2 hr., 5 min.
A version of this article appeared in print on December 14, 2018 with the headline: Close to Home