Street Corner Arts' We Are Proud to Present ...

This production is more than exceptional theatre; it asks thought-provoking questions about authority, perspective, and intention 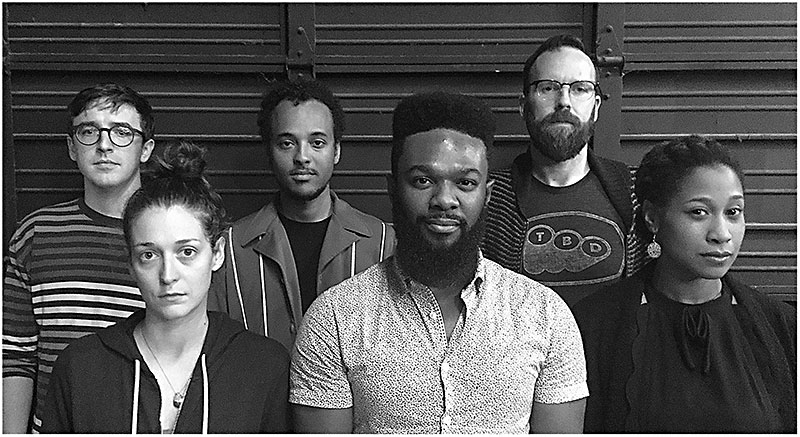 For those who only check reviews for a quick verdict, here it is: winner. Street Corner Arts' production of Jackie Sibblies Drury's play-with-the-very-long-name has some of the best ensemble work and direction (by Liz Fisher) that you'll see in Austin. The design is largely minimalist. Nick Hart's sound design is spot-on.

A play within a play, the show features a group of performers working on a presentation about the genocide enacted by the Germans in what is now Namibia, in the years around 1900. (Did you know that happened? You probably didn't. I did not.) The actors are excited and eager. Half of the six performers are black, half are white, all are American. They first deliver a lightning-quick overview of the historical events. You can handle the information now because it's at roughly the same degree of intensity as a PBS special.

Then, a debate opens up between the actors. One of them, known as White Man (Judd Farris), wants to use as material the letters written to home by Germans during that time. Some of the cast agree and, as with any group of actors, there's a mix of motivations, but the arguments coalesce around the fact that there simply isn't much in the way of what we would define as a historical record of what took place, so what else can they use? Others in the cast disagree, especially the actor known as Black Man (Matrex Kilgore), who points out that the letters effectively erase the experiences of black Africans, specifically the Herero people – the exact people whose plight they're trying to understand.

The actors, led in the play by the character Black Woman (Valoneecia Tolbert), agree to start using the letters just to see where that leads, because they're exploring ideas collaboratively. It's theatre. They're doing improv.

Then it all explodes. The actors wind up going to a very dark place. It ends with a "win" in that they've found the heart of their presentation, but the cost of unearthing meaning is not easy to bear. It's also unevenly borne.

One point that the white actors raise in their discussions is that this genocide is different than the Holocaust of 1941-45 because in what is now Namib­ia, the Ger­mans did not keep the same sorts of records that they did during World War II. We don't know the names of the Herero victims, and there is no clear documentation.

How do we respond to that difference? Should we? At heart: Look at how the world assigns or denies humanity. Look at how we do it.

That is far from the only troubling question in the play, and its treatment and the way that the reactions of the actors – six well-meaning humans with six different opinions – fall along racial lines are devastating and illuminating.

The show explores questions of authority, perspective, intention, and what it means to sympathize with a murderer in order to portray him or her. Notably, it does so without relying on the oft frustrating pop-culture vocabulary of "wokeness." Language here is sharp, powerful, and exact.

Theatre's power lies in its ability to show us things that can't be understood by telling. Here is a play that begins with the intention of presenting facts and ends by showing us ourselves.

It's worth noting that this review is written by a single reviewer, who is white. Allowing that the words "comments section" strike fear into the hearts of most sane individuals, I hope that those who see the production will extend the conversation where this review appears on the Chronicle's website.

We Are Proud to Present a Presenta­tion About the Herero of Namibia, Formerly Known as Southwest Africa, From the German Südwestafrika, Between the Years 1884-1915