You may think you know how big Texas is after driving from Austin to El Paso or Amarillo to Houston (which are, to be fair, sizable distances), but you'll gain a new appreciation for the size of the state when you follow Jay Sauceda around it. And I mean around: A Mile Above Texas documents the photographer's weeklong flight along the state's edges, following the Gulf Coast, Sabine River, Red River, Panhandle border, Big Bend, and Rio Grande. Shot from so high up that houses look like they belong on a Monopoly board, every frame contains a vast expanse of land or water. Together, the images seem to cover a full country – or more than one, given how regions differ, from Padre beaches to Great Plains farmlands to the Chisos Mountains.

The aerial views reveal how fond humans are of geometric forms and imposing them on nature – roads in straight lines, subdivisions in tight grids, fields in perfect squares and circles – and how utterly nature rejects order: East Matagorda Bay's jigsaw shoreline, Santa Elena Canyon's irregular bumps, Red River's meandering curves. And the striking clarity of Sauceda's shots at these elevations suggest familiar objects of much smaller size: deep East Texas forests resembling a nubby wool sweater, circular fields in North Texas farms looking like radar screens, rippling water on Galveston Bay that could be blue corduroy. With their views and sumptuous color, Sauceda's images mesmerize. Wherever you look, A Mile Above Texas provides a fresh perspective on our state.

And for the Lone Starry-eyed loved ones who can't get enough images of their home state:

As Far As You Can See: Picturing Texas by Kenny Braun (University of Texas Press, 200 pp., $45) Exquisite images by Austin shutterbug Braun that cover the length and breadth of the state, capturing in every shot Texas' epic expanse and natural beauty.

Weird Homes: The People and Places That Keep Austin Strangely Wonderful by David J. Neff and Chelle Neff, photographs by Thanin Viriyaki (Skyhorse Publishing, 224 pp., $24.99) An inside look at 19 stops on the Weird Homes Tour, each a shrine to creativity expressed in colorful, whimsical, imaginative, inspired ways that all scream Austin. 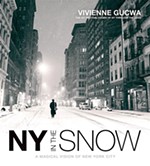 NY in the Snow
In this gorgeous volume, photographer Vivienne Gucwa documents the Big Apple's yearly transmogrification into a winter wonderland