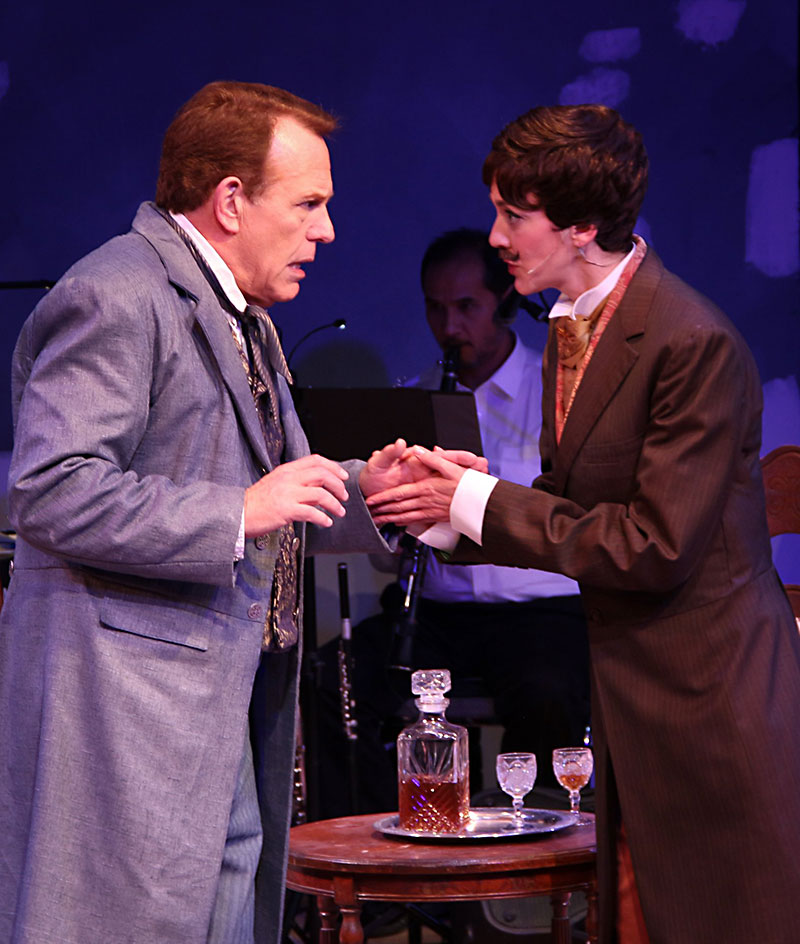 It's tragic when a potentially great work of art – Jimi Hendrix's First Rays of the New Rising Sun album or Orson Welles' film The Other Side of the Wind, for instance – is left unfinished due to the untimely death of the artist. But in the case of celebrated novelist Charles Dickens' demise, the result is comedic.

In 1870, Dickens died while his whodunit The Mystery of Edwin Drood was being simultaneously penned and serialized. The author left behind no notes to reveal which of the work's many characters – relatives and acquaintances of Drood – committed his murder. Playwright and composer Rupert Holmes turned this bleak, incomplete story into a 1985 Tony Award-winning musical comedy seasoned with witty Gilbert-and-Sullivanesque ditties, quasi-operatic ballads, and a few fillers that help move along the plot, flesh out key characters, and add energy to the proceedings.

The play takes place in Victorian London, where a rowdy music hall theatre troupe is mounting a stage production of Dickens' unfinished novel and leaves it up to the audience to decide on the murderer and the designated lovers for that evening, all of whom get to end the show in song. Holmes makes sure to give each character a plausible motive and has them stock the plot with an abundance of red herrings.

Key to the success of a play-within-a-play like this is a cast who fully embraces the thick veneer of melodrama that coats Dickens' writing while playing up the nudge-nudge-wink-wink mindset of the period actors performing it. Plus, the actors need to get us to like their characters from the get-go so we actually care about who the murderer and the lovers are at the end.

Austin Playhouse checks all these boxes. The company last staged the musical in 2005, and actors Jill Blackwood (as the victim Edwin Drood), Rick Roemer (as Drood's unscrupulous uncle John Jasper) and Jacqui Cross (as the opium den madam Princess Puffer) reprise their roles and, with Playhouse Producing Artistic Director Don Toner once again at the helm, set a high bar for vocal performance and rich characterization.

A dream team of other performers, including the silver-throated Claire Grasso as Drood's beloved Rosa Bud, Maria Latiolais and Morris Jude Martinez as the exotic visitors from Ceylon, and Scott Shipman as the forlorn Reverend Crisparkle, matches them. And as the show's Master of Ceremonies, Huck Huckaby is a delight. He comes armed with veteran showmanship, an arsenal of deliciously bad one-liners, and charm best on display when he is given an opportunity to step into the role of the Mayor in the play.

Brian Coughlin as the always-an-understudy Bazzard and his delivery of the self-deprecating song "Never the Luck" nearly steal the show. Meanwhile, Samuel Knowlton as the ever-tipsy gravedigger Durdles and Ben Gibson as his clueless sidekick Deputy add another layer of broad humor to this show.

Diana Huckaby provides colorful, period-appropriate costuming that seems to get lost in the scenic and lighting design by Mike Toner and Don Day, respectively, that does little more than put bunting on the proscenium and a spotlight on the performers to establish the play's pretense of a Victorian-era music hall. The same can be said for Meghan Bowman's merely serviceable choreography. The fivepiece band is wonderful, but music director Lyn Koenning and her musicians are placed onstage, uncostumed and with modern instruments. As such, they call unintentional attention to the Austin Playhouse play being performed rather than the 19th century play-within-a-play devised by the playwright.

And yet, this production under Don Toner's direction is thoroughly engaging and always entertaining. Despite water damage from an old sewage pipe that burst just a week before opening, industrial dehumidifiers and the company's "the show must go on" mindset help deliver a fun performance of this rambunctious work. While Dickens' A Christmas Carol is a holiday staple, Drood makes for an effervescent alternative.

The Mystery of Edwin Drood