In this retelling of the Charles Dickens novel, a visible love of narrative is the show's greatest strength 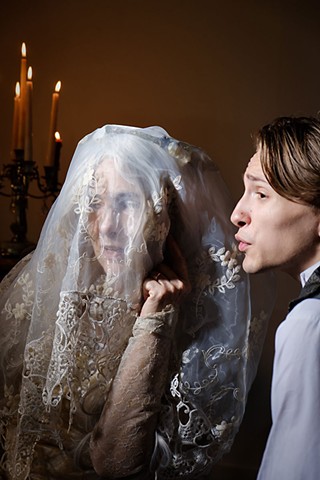 "What an astonishing tale!" The words fly forth from Herbert Pocket just after he and his friend Pip have heard the convict Abel Magwitch relate his sorry history, from "tramping, begging, thieving" as a child to escaping from a prison ship bound for Australia. But they might have been uttered by any number of characters at any number of points in Barbara Field's stage adaptation of Great Expectations, for in it, many stories are related by one character to another and in their intensity and drama – hidden family deeds, ill-fated love affairs, episodes of violence, clandestine schemes – they can also astonish. In addition to preserving those from Charles Dickens' novel, the playwright has kept the larger story being spun by Dickens himself, as narrator of the progress of young Philip Pirrip (Pip) from orphaned blacksmith's apprentice to gentleman-in-training and his life-changing encounters with such figures as Magwitch, Herbert, Miss Havisham, and Estella. Field's device lets actors not only spin yarns in character, but also step outside the story being played to set the scene or comment upon it – to tell tales out of school, as it were. The result is a delightful Dickensian tapestry of story.

Different Stages' production embraces this surfeit of storytelling and displays a love of narrative that is the show's greatest strength. The 11 actors may well enjoy portraying the novel's variously callous, generous, sordid, and civil individuals, but it's when they get the chance to deliver Dickens' narrative prose that they visibly show the most pleasure. They drop what are sometimes stiff personae and relax into the text; their faces brighten, and they meet the audience's eye with a conspiratorial gleam in their own.

That spark helps keep the fire going in a show that is at times too amiable for the tale it's telling. Pip's journey exposes him to cruelty and generosity, unrequited love and enduring loyalty, menace and madness. Melodrama is the oxygen that Dickens feeds on, that makes its abuses breathtakingly harsh and its kindnesses draw tears, and much of what passes for that here feels light and subdued. That serves a few of the gentler characters, such as the blacksmith Joe Gargery, who's forged by Robert Stevens with an endearing humility, but it leaves others making less of an impact than they could. Helping counter that is the sense of tenseness underlying Weston Smith's Pip, as if his muscles are continually seizing up with anxiety and apprehension; it expands on the sense of Pip as an outsider and one used to being misused. And no one here misuses him better than Annie Nicole Merritt's Estella. The pride ascribed to this object of Pip's affection is clear in the self-satisfied smile the actress gives her, and she projects the casual cruelty of one who slowly drowns a spider while washing it down the drain. The most vivid support comes from Michael Costilla as the gruff, plainspoken Magwitch and Will Douglas as the appreciative listener to his tale, Herbert Pocket. The verve with which Douglas endorses the convict's autobiography, in his voice and in his expression, fills his entire performance, making his Herbert the kind of companionable, true-blue friend we all wish for.

With its fluidity of place and character, Field's script encourages theatricality, which Ann Marie Gordon's set largely plays into; though its upper level depicts part of Miss Havisham's decrepit mansion, the staircase leading to it and a table and benches on the bare floor below allow for a variety of suggested settings. It falls to Jennifer Rose Davis' costumes to ground us in the play's Victorian world, and the browns and grays of the suits and gowns evoke the smoky, foggy world of London and the marsh country to the east while providing a rich mix of textures and patterns. Director Karen Jambon works to keep the play's short scenes and quick transitions moving smoothly and largely succeeds, though a tight space between the edge of the set piece and one wall hinders some of those efforts. Her real achievement here, though, is the love for story she brings out in her cast. At its best, it's big-hearted enough to make you want to follow Herbert Pocket's lead and say what a tale it's told.