At this psychedelic music fest, it's all about community

Going into last weekend's second annual Saturnalia Festival (Nov. 16-18), "Snapshot" was familiar with only about a third of the 50-plus performing artists, which opened wide the possibility for discoveries. One of those, EB & the Gang, features the fest's two property hosts: Eileen Bristol (bass), co-owner of Sahara Lounge with son Topaz McGarrigle (of Golden Dawn Arkestra), and Reverend Charles Easley (trumpet/flugelhorn) of Webberville Road Baptist Church, site of the fest's main stage enclosure. The group's inaugural Saturnalia appearance on Saturday underscored the community bond of perhaps unlikely collaborators who once again brought this festival of psychedelically motivated artistic weirdos to fruition. 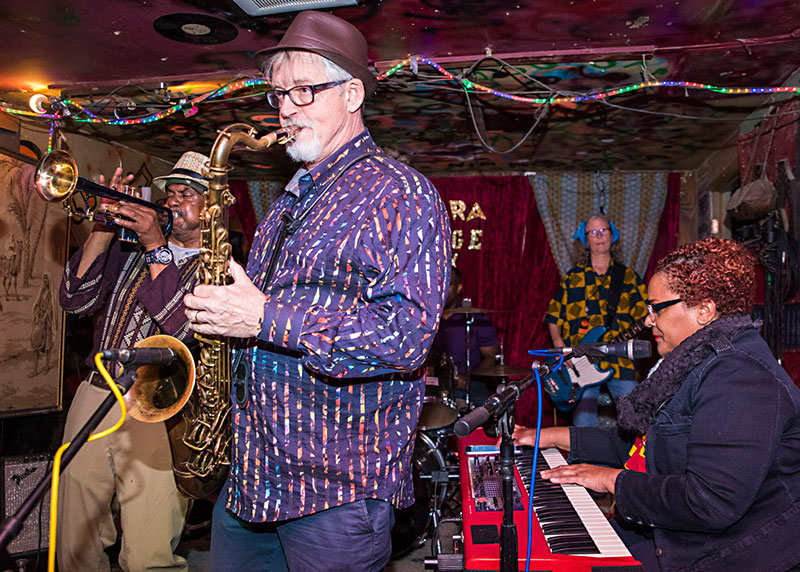 Reverend Easley (left) on EB & the Gang's sound/motivations in relation to the fest's goals: "It's a fusion of life's experiences. We all bring something different ... and it's more than music. It's a sort of way of life, being accepting and spending time with people, and that's the best thing you can do." 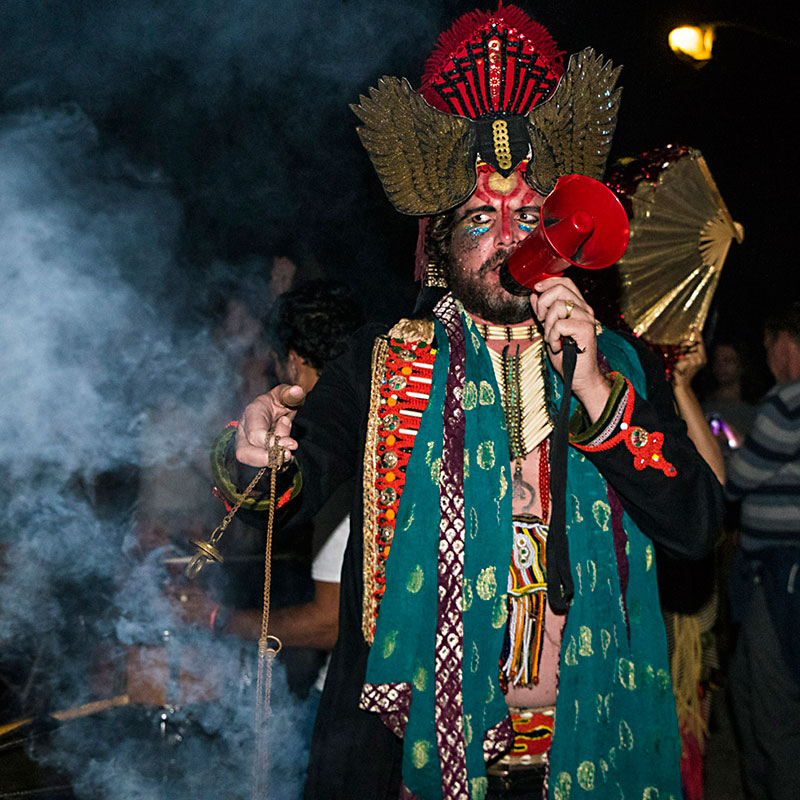 Topaz McGarrigle (pictured with Golden Dawn Arkestra on Saturday) on how the nightclub/church alliance continues Austin music's legacy: "My dad was in a psych band in the Sixties and played with Roky Erickson in Austin. They used to always play at churches, actually. So [Saturnalia Festival is] kind of in the [same] vein as the old hippie festivals." Bristol (on bass, playing Saturday with Zoumountchi) says she's kept EB & Gang together because of Easley ("He's my reason to have a band") and insists his loving relationship with her son (McGarrigle, who jumped into this pic) was crucial to Saturnalia's success: "I communicate with Charles and all that but ... Topaz is the one that really had the vision and approached [him]. Charles told me one time, 'I'm gonna put Topaz in my will.'" Still, the fest's talent bookers, also owners of the Electric Church (three of the five – Levi Murray, Jesé Galapagos, and Nate Rendon [l-r] – seen here playing Sunday with the Sun Machine), praise Bristol's instrumental role in this second go-round: "There were times when we'd be disagreeing about stuff and she'd come in to mediate," Rendon says. "She's the matriarch of our group at Saturnalia and the little musician scene that we're building around it." In Bristol's eyes, the fostering of that scene – or as she defines it, "community" (pictured in part here) – is Saturnalia Festival's greatest local contribution: "It's all about human relationships, and music brings people together," she says. "We may not have really made money, but we made human connections."

See all of David Brendan Hall's photos from Saturnalia Festival in our gallery.
More Snapshot columns