This production is everything but sultry, which is the very thing the Tennessee Williams drama needs most 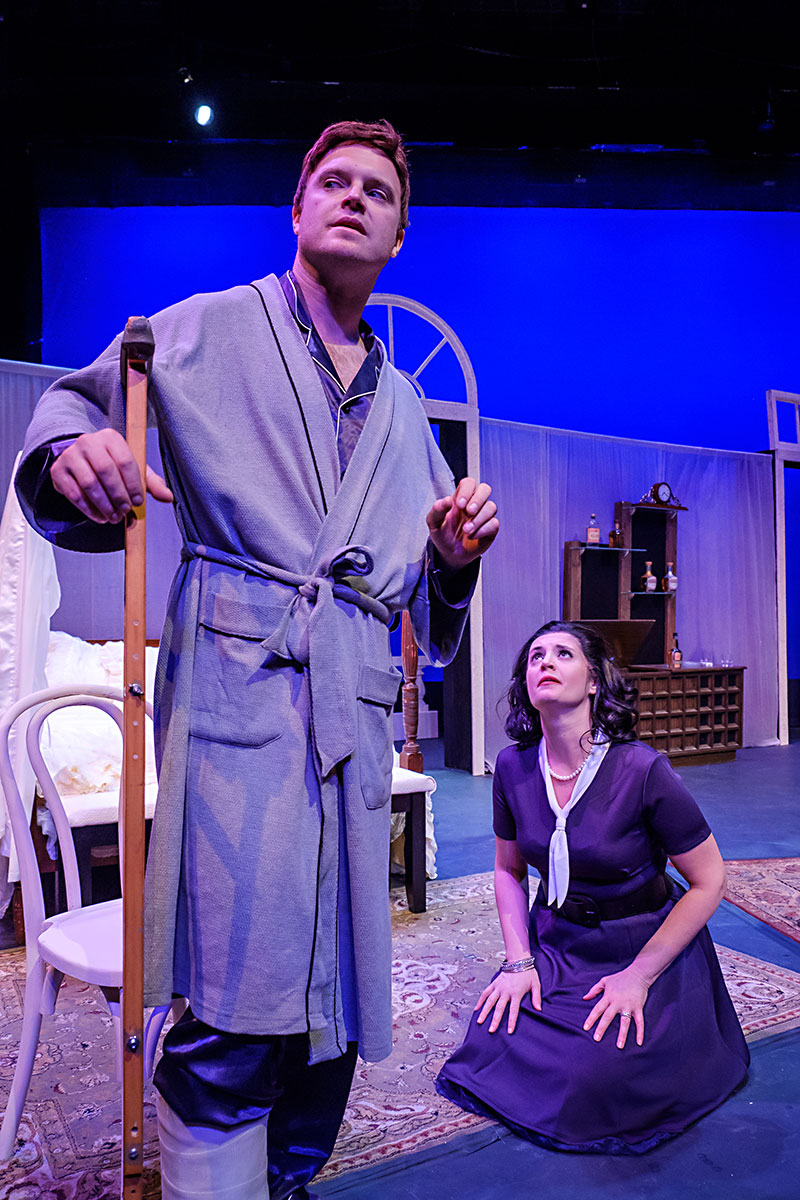 If the popularity of Keeping Up With the Kardashians tells us anything, it's that audiences have a fondness for family dysfunction, deception, and sex. This is nothing new, if the plays of Tennessee Williams are any indication.

In the Forties, The Glass Menagerie and A Streetcar Named Desire offered conflicted family members baring their broken hearts, lost souls, and sexual longings while spouting Williams' lush, poetic dialogue, with the latter title earning the playwright his first of two Pulitzers. The second came in 1955 for Cat on a Hot Tin Roof, which is currently in production by Austin Shakespeare.

The play revolves around members of the divisive Pollitt family, who have gathered at their bourbon-soaked Mississippi Delta plantation home at the request of Big Mama (Elise Ogden) to celebrate the birthday of the hot-tempered, cancer-ridden patriarch, Big Daddy (Ev Lunning Jr.). We quickly learn that sex is the stuff that divides youngest son Brick (Zac Thomas) and his long-deprived wife, Maggie (Gwendolyn Kelso); defines Brick's often referenced but never discussed relationship with his deceased best friend, Skipper; and yields heirs to the family fortune, if the conniving but hapless eldest brother Gooper (Robert Deike) and his perpetually pregnant wife Mae (Corinna Browning) have anything to say in the matter. Unrealized dreams and unmet expectations create additional tension that is as thick as the stifling humidity that dominates the summer months in this part of the world.

But humidity and its emotional equivalent are missing from this otherwise wonderfully performed and always engaging production, due to some questionable acting choices and director Ann Ciccolella's artistic vision.

As Maggie, Kelso places her character's fierce ambition and unrequited love for Brick on the front burner, but the pilot has not been lit under her seductiveness. Maggie is a woman in heat, so desperately starved for her husband's touch that she should be pacing the room like the titular cat on a hot tin roof and speaking, as described by Brick, like someone who has been "running upstairs to warn someone that the house is on fire." Kelso has downplayed these traits in favor of vulnerability, and the show suffers for it.

One way is in the lack of sexual tension between Maggie and Brick. As a man who spends the entire play drinking himself into a coma of indifference – who wants nothing more than to "hear the click in my head" when the alcohol kicks in and the world goes away – Thomas' Brick is perfectly detached and thoroughly defeated. But his sexual ambivalence comes across as an absence of sexuality because Kelso's Maggie gives him little to play with (literally).

And there is nothing sultry about the world in which these characters exist. No one fans the air to convince us of the repressive heat that underscores this play, and there is no suggestion of the Mississippi Delta in the show's production values. Designers Tara A. Houston (scenic) and Patrick W. Anthony (lighting) create a bedroom with multiple doorways but no doors, and walls made of sheer fabric that allow us to see the outdoor balcony and backdrop scrim against which very little transpires. Nothing this abstract speaks to the family's opulence or the land's fertility.

We all want to hear that click when the real world goes away and the sweltering world Williams created kicks in and takes over. It doesn't ever happen.