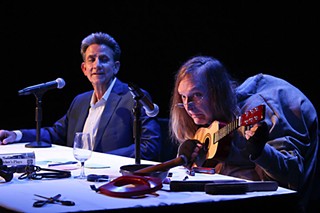 "But your face rings a bell": Ken Webster (l) as Beethoven and Robert Fisher as Quasimodo in The Hunchback Variations (Courtesy of Capital T Theatre)

Oh, reader. Occasionally there is a work of stagecraft that is so remarkable, so fine-tuned, so skillful yet ridiculous, that it earns the word "sublime." The Hunchback Variations is that play.

Capital T Theatre brings yet another Mickle Maher play (two short plays, actually, their full titles redacted here to reduce the risk of carpal tunnel) to the stage of Hyde Park Theatre, and it is brilliant. Presented first is The Hunchback Variations, in which the playwright of Song About Himself, The Strangerer, and There Is a Happiness That Morning Is once again calls upon his knack for manipulating the presentational nature of stagework to present what are, on the surface, a series of attempts at a panel discussion on artistic collaboration.

Participating in the panel are Ludwig van Beethoven (Ken Webster) and Quasimodo, the hunchback of Notre Dame (Robert Fisher). They are both deaf, but whatever, and they are here to discuss their recent attempts at recreating "the impossible sound," a stage direction for Anton Chekhov's The Cherry Orchard. Quasimodo is lumpy, bedraggled, yet earnest. He is something of a foley artist. Beethoven, who couldn't even be bothered to put on a period costume or wig, is a role that might as well have been written for Webster, making generous use of Austin's best deadpan.

As Quasimodo, Fisher exemplifies character work. He is comical, endearing, nonrepetitive, physical, and somehow very serious all at once. To see him carefully pick up and demonstrate what to do with a mini-whisk will warm the heart.

Maher's scripts are dense, literary affairs punctuated with silliness and pops of common sense. In talking about the table at Quasimodo's marshy hut where they worked on their collaboration, Beethoven describes it as a table made from a cathedral bell, and then observes that it was a terrible table, for it has no flat surface. It's nonsense that turns out to have so much sense, taken as a whole.

The second play of the evening, Faustus for short, pales slightly in comparison, but only because it's that hard to compete with near perfection. As close as you can get to a one-man show and still have two actors present, Faustus shows the character Doctor Faustus (Webster) from the Christopher Marlowe play, reckoning with the end of his life. He made a bargain with the devil and was granted 24 more years of life, otherworldly knowledge, and the use of Mephistopheles (Fisher) as his servant. But Mephistopheles keeps reading from Faustus' journal, and the play becomes a meditation on how we present ourselves to the world, what we hide, and what happens to the memory of us when we die.

With only one voice and a continuation of Webster's typical approach to his characters, Faustus doesn't soar as high as The Hunchback Variations, but it remains a fascinating, vibrant text. It's the sort of work that you sit with and gratefully ponder.

Mark Pickell's direction of the two plays is strong. He takes two wordy and intellectually intense scripts and creates a visually dynamic evening of theatre from them.

I fear that Cap T may be reaching the end of Maher's available oeuvre, as it currently stands. Hopefully, Maher will write more and the company will continue to find success with challenging scripts that are so well-suited to their casting and talents. 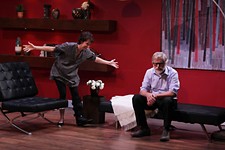 Capital T Theatre's The Goat, or Who Is Sylvia?
This production of Edward Albee's playshows that hubris and catastrophe are as much a part of America now as in ancient Greece