After leading historical and haunted walking tours for nine years in Charleston, S.C., historian, actor, and storyteller Jim Miles – now a high school history teacher in Taylor – has been running a similar business in Austin for more than two years now. Despite his brief stint in town, his research is extremely thorough, culminating in his most popular tour, Ghost Walk Austin, perfect for the Halloween season.

"We're not an obvious haunted city like Charleston or Salem or New Orleans. It's different than that," Miles says. "There's something especially creepy about walking around a city with brand-new condos all over, multimillion-dollar real estate, but just under these bricks is a Wild West city that's got a story to tell that's more violent than most."

On an appropriately dark and rainy night last weekend, "Snapshot" joined Miles' tour and, as a native Austinite, was surprised to learn new details about local hauntings. Without revealing everything, here's a rundown of the featured spooky spots. The site of the old Spaghetti Warehouse at Fourth and Colorado – now the Market & Tap Room and originally part of Austin's train station in the late 19th century – allegedly harbors poltergeists. Drawing from historical accounts, Miles drops a tidbit about the former restaurant's famous train car being traced to a fatal crash. 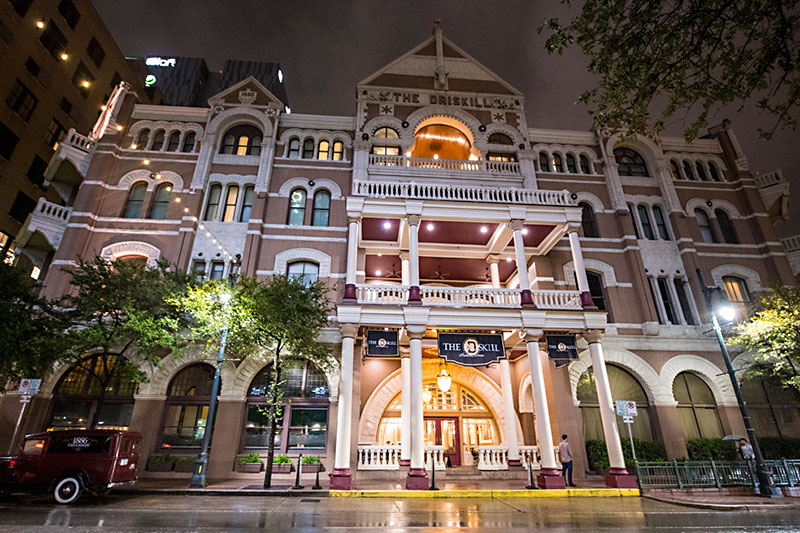 The Driskill Hotel, completed in 1886, reportedly houses several hauntings, including the ghost of namesake Colonel Jesse Driskill himself, the Suicide Brides (Miles reveals that there were actually two cases in the same room, first in 1950 and again in 1991), and the tragic accidental death in 1890 of a young girl named Samantha. The most chilling of those by far revolves around the latter unfortunate, who died after falling down the main lobby staircase while chasing a toy ball. Samantha's portrait – commissioned years after she died – hangs on the fifth floor, moved there after too many accounts of her laughter heard in the lobby, where it originally hung. Miles relays even creepier accounts that have abounded since its relocation ... Finally, the tour shifts from ghost stories to detailed walk-throughs and accounts of axe murders committed by "America's first serial killer," the Servant Girl Annihilator, who butchered eight women near San Jacinto Boulevard from 1884-85. The info is widespread these days, but it's well worth witnessing Miles bring the tale to life with his excellent scene-setting skills. Miles' tours begin and end at Jo's Coffee on Second Street, where he leaves participants with a coy "sweet dreams!" and insightful final thought: "At the end of the day, every story of death embraces the preciousness of life ... [the dead] should be honored."

For pricing and available dates, including Oct. 30, visit www.touratx.com/ghost-walk. See more at austinchronicle.com/arts/snapshot. Want to pitch an event, happening, idea, or person for "Snapshot"? Email the author/photog: dhall@austinchronicle.com.