“Candace Hicks: Many Mini Murder Scenes” at Women & Their Work

In her small-scale re-creations of murder scenes in mystery novels, the artist provides playful social commentary on the genre 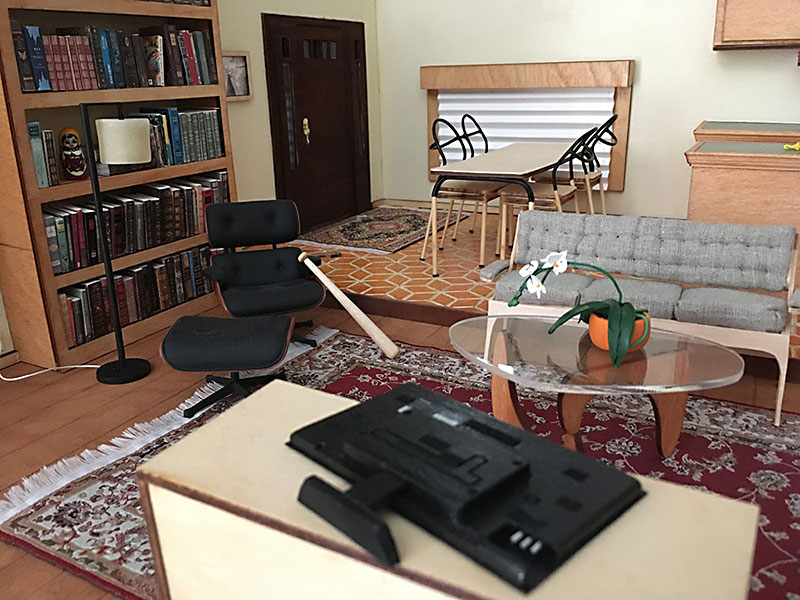 In the supplemental book that accompanies the "Many Mini Murder Scenes" exhibition, artist Candace Hicks bemoans the use of Russian dolls as "a tired metaphor" and plot device in two of the books she's read to create this show.

So perhaps an Easter egg is a better symbol to describe the winks and nods she's worked into these pieces, conceived of over a six-week period of reading almost exclusively fictional murder mysteries. As in past work, Hicks returns to the subject of coincidences, collecting them throughout her reading and documenting them in her booklet, the key to this meandering map of observations. She hangs on similar names or plot points, imagining she's read one long murder mystery book instead of several. For example, discovered sunken jewelry in one novel recalls a sunken watch in a previous book. A cursed emerald necklace echoes a foreboding diamond bracelet from a different plot echoes a fake emerald necklace from a third. A similar dynamic occurs with a cucumber patch, which Hicks uses to demonstrate the passivity of female murder victims, often white, often beautiful. Repeating murder locations (quarries, secret basements), similar murder weapons (baseball bats), and so on.

She nestles these egg-clues and symbols into large tableaux circling the gallery and featuring close-up shots of apparent murder scenes created using paper cutting and quilling techniques. Viewers see the back of a black body submerged in a pond, a heel in the sand, a skull in leaves, a head smothered by a pillow, wearing an emerald necklace – all executed with the patient detail likely necessary of a premeditated killing and likely taking long, meditative hours to accomplish, as with reading.

The eggs also nestle in miniature scenes constructed in glass boxes in the room's center: an emerald necklace spilled out in a bedroom; a home exterior, complete with security system and conspicuous bushes; a satisfyingly detailed living room interior complete with a New York Times paper and classic book titles teasing their possible meaningfulness. In two rooms, tiny "Matryoshka" nestle into bookshelves or boxes. Clues are also apparent when viewers wear provided 3-D glasses to find hidden messages and Hicks' social commentary on the walls of the rooms, and on the pages of the most critical piece: the booklet.

The scenes speak a common language of crime scene photos – quick snippets of body parts and possible murder weapons – but, because of the paper medium and style, possess a remove from any real gore or violence the dead bodies might imply. Fictional murder mysteries tend to work in the same way: more puzzle than cold case. Hicks has created another such puzzle in "Many Mini Murder Scenes," building a world of interlocking scenes for us to chew on with clues that do, at times, turn the lens on the mystery genre and its handling of gender, as much as they delight in the meaning of character's names.

Unlike the formative novels Hicks read, however, there wasn't a tidy box or bow to clean up this mystery. Not "every individual fact snaps into place" as, she writes, it's supposed to in the mystery novel, though Hicks may be operating over our heads with her own jokes and messages.

Still, the work manages to re-create the mind game of a murder mystery, on a smaller scale. Chekhov's gun never fired, but remained locked and loaded as I browsed. Maybe it's more fun that way.