The Austin author both writes about and illustrates the grand, strange life of the waxworks queen 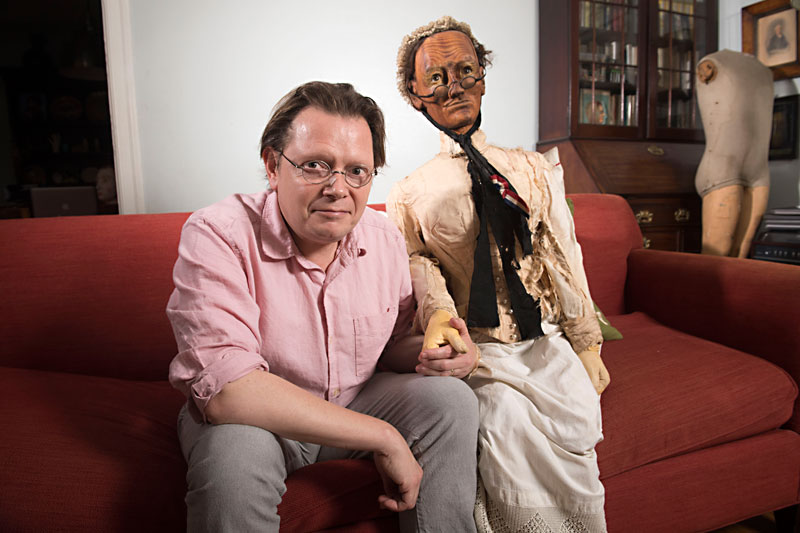 There's an inherent humor to a book titled Little that's over 400 pages long. But then again, intriguing contradictions go right to the heart of this fictional memoir of the queen of waxworks. You might hear the name Madame Tussaud and get flashbacks to family vacations, file her away with P.T. Barnum and his ilk – enterprising entertainers from nebulous olden times whose personal details we forget (or fantasize and obscure in movie musicals). But her story is older than you might have guessed – French Revolution-old – and full of as many peculiar figures, acts of profound kindness and cruelty, and grand reversals of fortune as any Dickens.

Edward Carey is eager to clear away the cobwebs surrounding Madame Tussaud, or Anne Marie Grosholtz, as she was known for much of her life, with Little, his latest novel. After concluding his YA Victorian fantasy series, the Iremonger Trilogy, this writer, illustrator, and UT-Austin professor returned to a fascination he's had since a fortuitous post-collegiate odd job – a fascination with the tiny Alsacian woman who wove her way through history, capturing it in wax for future generations.

Little will be launched, along with an exhibition of Carey's illustrations and other artwork, at a special Texas Book Festival and Austin Public Library event on Oct. 23 in the Austin Central Library Art Gallery. Before the hubbub sets in, Carey was kind enough to discuss when he first became enamored of Marie and how sketching helped him see through her eyes. 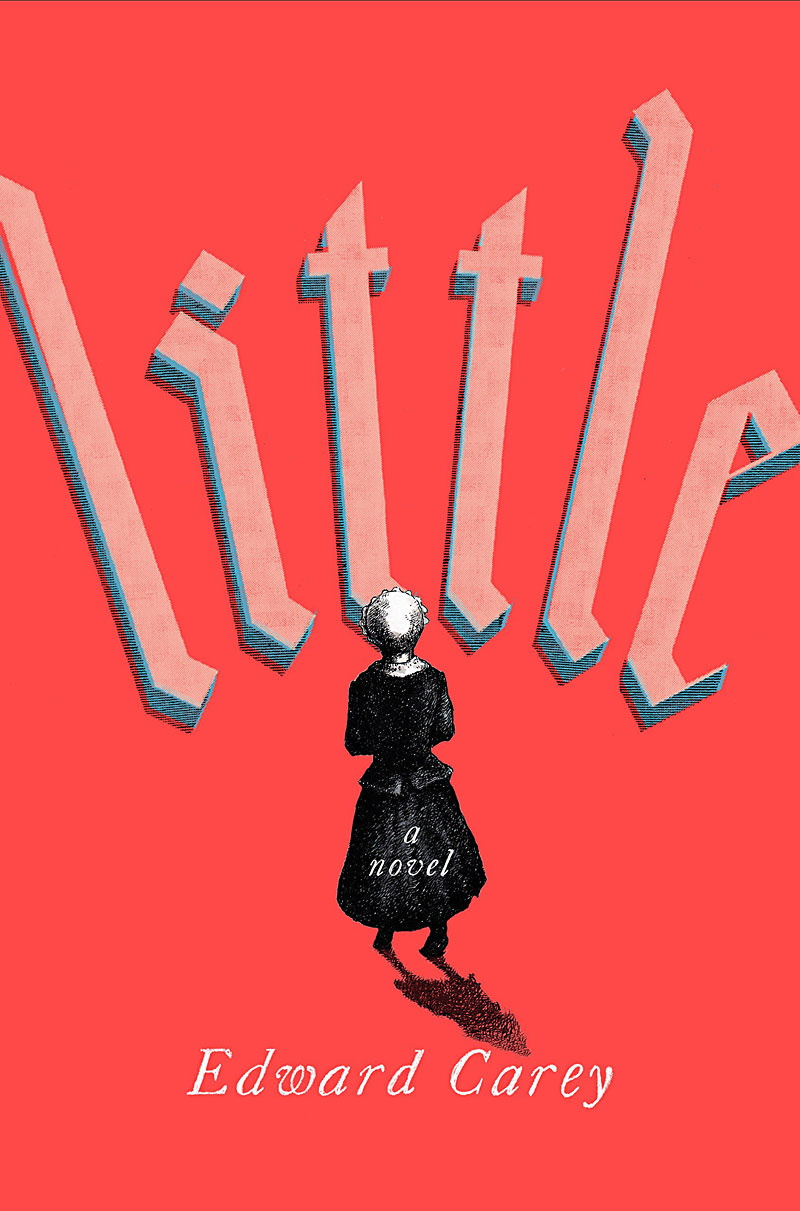 Austin Chronicle: It was a bit lovely and surprising to come to the end of the book and see the first line of the acknowledgments – that Little took 15 years to finish. I'd love to hear about the job that sparked your interest in Marie and what this journey's been like.

“The most extraordinary waxwork of them all is the self-portrait [Madame Tussaud] made of herself as an old woman. ... She has an amazing presence, and she feels as if she’d come out of the pages of a fairy tale – she’s mythical, you can’t quite believe her life, and yet it’s true.”

Edward Carey: In my very early 20s, in a free fall from university, I took a number of odd jobs in London. I was a stage door keeper of a West End theatre, I was an archivist for a plastic surgeon, and I was a guard at Madame Tussauds. At the waxworks, I began to discover the real life of Marie Tussaud, that she had known and cast so many famous people: Voltaire, Franklin, Louis XVI and Marie Antoinette – both their full bodies when they lived at Versailles and their severed heads – Jean-Paul Marat, the rabid doctor who demanded that so many more people be guillotined – she was ordered by the Convention to cast him just after he had been murdered in his bath so that his body might be preserved and venerated. The waxworks that she had cast herself had a very extraordinary feeling of history about them. They are witnesses; here was the French Revolution in color and in three dimensions. In a way, she rescued history, she brought the dead back to life. Standing beside one of her waxworks from the Revolution is an unforgettable experience, but the most extraordinary waxwork of them all is the self-portrait she made of herself as an old woman. This tiny, slightly smiling, creased and wise-looking woman, dressed in black bombazine, is clearly in charge of all the other waxworks. She has an amazing presence, and she feels as if she'd come out of the pages of a fairy tale – she's mythical, you can't quite believe her life, and yet it's true. When working at the museum, I decided I would try and write a novel about Marie Tussaud. It took so long because I wasn't quite ready, and I had to do months of research, and I kept tripping over all the details. The novel changed shape – sometimes it was 700 pages, sometimes under 300. I couldn't get it right. I abandoned it, I thought forever. When I was given tenure at UT, I had a lighter load my first year, and then I turned back to the book just to see what it was like, and suddenly I could see how to do it. Suddenly, her voice seemed much clearer to me. Then, at last, I finished it quite quickly.

AC: This is not the first book of yours that features your own illustrations throughout, but it is the first one where they are presented as the work of a real historical person. Did you find that informing your style or approach to illustration?

EC: I always draw the characters I'm writing about – it's the best way I know of getting to know them. For this book, very early on, I painted a fake Jacques-Louis David oil portrait of her, because I was certain that David, Robespierre's chief propagandist, should be in the book. Slowly, I understood that I should include drawings that she made herself – or at least that's what the book says – so that the reader would have access not just to her words but to her pencil as well. So you can see through the eye of her pencil. I wanted to try and create what she was and what she saw in words and pictures. So drawing was a way of getting closer to her, of finding her voice.

It seemed to me that Marie Tussaud must have been so fascinated by all the heads (attached and separated) that she would have studied them all very hard, with equal fascination. She would see those fractioned bodies as facts, as testaments to what human beings can do. Pencil sketches from her life seemed very right for the book, it helped me to focus on what she was experiencing. I also made a four-foot doll of her, carved out of wood – this doll is a character in the book – my wife very kindly had a haircut so I could give the wooden woman some hair, and this mannequin has lived at home with us ever since.

AC: In your Iremonger Trilogy and in Little, there is such an interest in and sympathy toward the lives of objects. Is that a point of view that you find informing your day-to-day life? Are there objects that inspire your artistic work?

EC: I've spent a lot of time reading and studying – and teaching – fairy tales, and often they're told from the point of view of objects; that shift in view allows you to see the world from such a new perspective. And objects outlive us, they go on without us. In Florence, there is an orphanage – now a museum – where the mothers leaving their babies used to leave an object with their child, a token of who their mother was. And these objects – a label, a thimble, a coin, a button – were cut in half, the mother taking one half and the orphanage retaining the other. It was hoped that one day the object would be complete again, that the mother would return to claim her child. But today there are many halves that still remain in the orphanage, they will never be complete again. And of course, they're heartbreaking.

I keep quite a lot of things from England about me. I love living in Austin, and it's been my home for eight years, but I am always aware that I'm a long way away from my old home (I'm originally from England). Living far away is also a great release, it gives you a certain freedom. I do think of all the objects we chose to have about us, our armor against the world, they tell so much about who we are. And when we die, they're scattered and disposed of. Does that sound very bleak? I don't mean it to.

I do think objects speak to us.

The Texas Book Festival and the Library Foundation will host a book launch for Edward Carey’s novel Little and the opening of the art exhibition “The Illustrated Fiction of Edward Carey” on Tue., Oct. 23, 7pm, at the Austin Central Library Art Gallery, 710 W. Cesar Chavez.

A version of this article appeared in print on October 19, 2018 with the headline: Though She Be But Little

Leon and Stella Alesi: Love Conjures All
In camera and out, this couple provides ocular proof of a life in the arts