"Ed Ruscha: Archaeology and Romance" at the Ransom Center 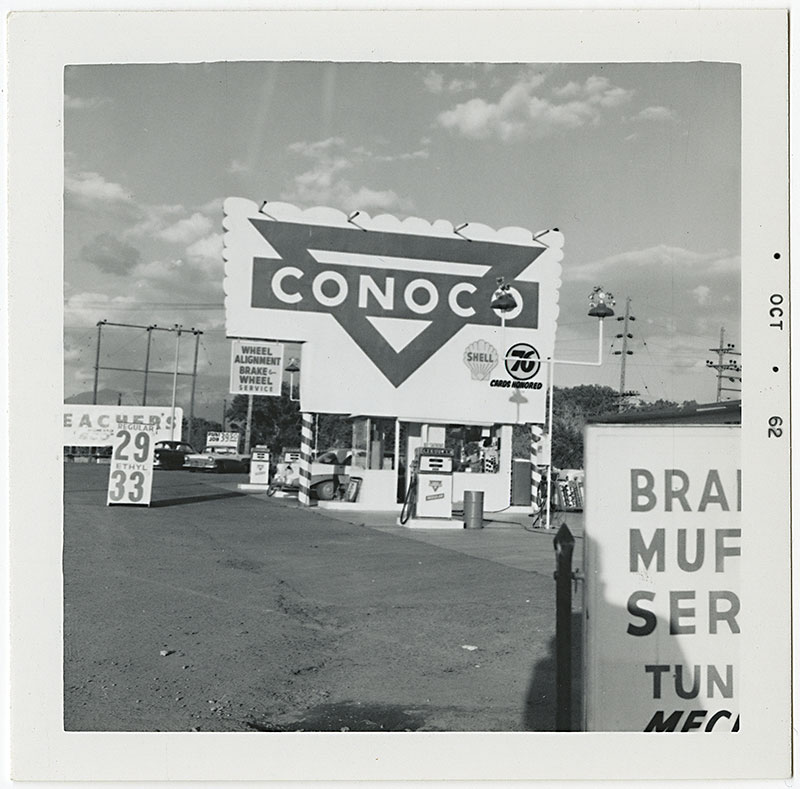 In 2013, 50 years after his first solo show and the publication of the groundbreaking art book Twentysix Gasoline Stations, Ed Ruscha chose the Harry Ransom Center as the home for his personal archives, calling it "the home to end all homes" for its dedication to scholarship and public access. The extensive collection is a comfortable fit for Ruscha, as his work itself is archival in nature, a sort of documentation and collection.

"Archaeology and Romance" is set up as a more-or-less chronological walkthrough of some of Ruscha's art books. At the onset is the trailblazing Twentysix Gasoline Stations, where the viewer is treated to a copy of the book, chained to a little podium, to thumb through. The material surrounding the book pulls from the archives to reveal the process behind its creation and how Ruscha's view of the work changed over time. There are photographs and screenprinted works based on some of the more recognizable shots from the book, namely those of the Amarillo Standard Station.

Surveying the titles of the books on display is like scanning entries in a nutso inventory spreadsheet: Twentysix Gasoline Stations (1963), Various Small Fires (1964), Every Building on the Sunset Strip (1966), Thirtyfour Parking Lots in Los Angeles (1967), and Nine Swimming Pools and a Broken Glass (1968) are all available to thumb through.

In a 1965 Artforum interview, framed and displayed, Ruscha discusses his subversive approach to photography, saying, "I think photography is dead as a fine art; its only place is in the commercial world, for technical or information purposes. ... Thus, it is not a book to house a collection of art photographs – they are technical data like industrial photography." The work of art is the completed book itself. This is made clear from the archival material, where Ruscha's mock-ups and sketches, ledgers and receipts, and lists of words show a preoccupation with every aspect of the final product, from dimensions to layout to typography. The photo crops were in service to the layout. The typography often came before the photos and the titles before the typography.

"Archaeology," the excavation and analysis of physical remains, is what is presented, and it is an archaeological dive into Ruscha's archives in the spirit of Ruscha's own work collecting and cataloging physical, everyday objects. His motifs – gas stations, parking lots, swimming pools, and tacky apartments – document the time and places surrounding him. They are markers of 1960s Cali sprawl and aspiration, isolated, collated, and re-emphasized. Ruscha documents patterns of human activity with a noticeable void of human presence. There are traces of people in the images: wet footprints trailing a diving board in one of the nine swimming pools or a gradient of oil residues as parking spots move farther from the door in one of the 34 parking lots – eerie impressions. Ruscha's archival material provides similar glimpses. We can trace his thoughts as we read his scribbles – "make it look more like a slogan" in all caps or red-inked cursive "would it be better here?" with an arrow and an "x" – but these imprints only add to the evocative nature of Ruscha's work and persona. Therein lies the romance.

"Elliott Erwitt: Home Around the World" at the Ransom Center
This survey shows how the photographer captured the culture of his time in ways both compelling and frightening