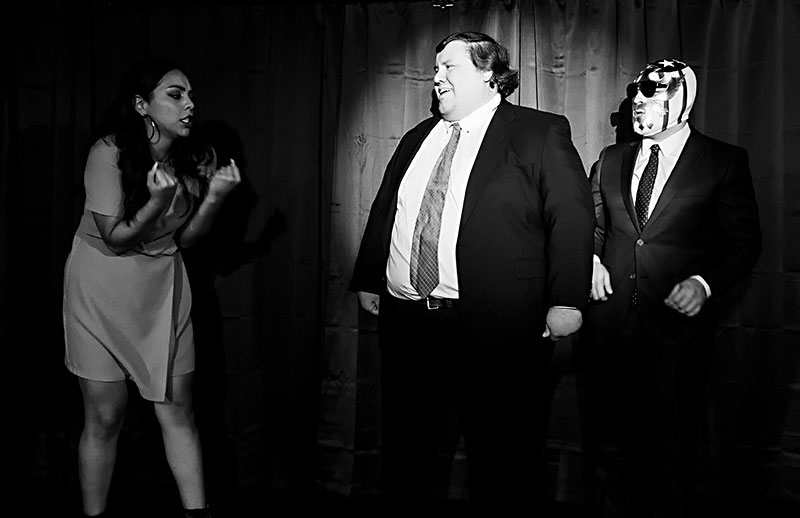 The walk-and-talk looks familiar: the president being briefed by his head of security as they stride briskly through the halls. And the sound that follows rings a similar bell: It's the swelling, stirring strains of The West Wing theme. But this security chief is accessorizing his natty gray suit with a red-white-and-blue luchador mask. And judging by the chief executive's lack of, let's say, intellectual verve, this guy's no Josiah Bartlet. No, despite the sensory cues, we aren't in Aaron Sorkin's (White) House. This is la Casa Blanca, the president's residence as conceived by the improvisers of Prima Doñas, creators of the B. Iden Payne Award-winning sci-fi telenovela Latinauts. They've taken a break from their spacefaring adventures aboard the starship Edward James Olmos to spend this month before the midterm elections exploring the strange lifeforms within the swamp that our naranja-skinned Anglo president promised to drain. But though this show is down-to-earth, LatiNacional: tu casa es mi casa is set in the Latinx-dominant universe of Latinauts, meaning the presidente de los Estados Unidos runs the country from the Huevo Office and has a masked Secret Service agent who, before restraining someone, asks his boss, "Permission to put him in a lucha libre hold?"

This being such a ripe time for satirizing presidential politics, some pointed jabs at the current occupants of 1600 Pennsylvania Avenue might seem a given. But LatiNacional isn't necessarily shooting for a direct lampoon of the Trump administration. You won't see, say, mirror-universe versions of Melania in its first lady or Sarah Huckabee Sanders in the press secretary, and the cast managed to get through its entire Oct. 6 show without a single reference to a Supreme Court confirmation hearing (!). Topical references may show up in future "episodes" as the show begins to gel, but based on last week's performance, the Prima Doñas are more interested in the telenovela aspects of the White House bubble. Among the conflicts that night were whether the president would remember his wedding anniversary this year and getting el Jefe's freeloading uncle to move out of, as Tío called it, "Lincoln's Bedroom." The performers were putting their focus on the characters.

And the characters they're developing are well worth watching. Roxy Castillo's First Lady may be half the size of her towering spouse (imposing James Fernandez), but she has a strong will and a short fuse where he's concerned; if he neglects her one more time, she won't need any help from Congress to declare war. As the sponging Tío, Carlos LaRotta is never without a beer in his hand or a hand out, and his comical way with words adds to his appeal. (The other night, he asked to help address the issue of "global warning.") Ben G. Bazán, sporting a cheap "USA" track suit, has the president's none-too-bright brother constantly throwing pity parties for himself, departing from his default Spanish every now and then to toss out a phrase in English that he o-ver-ar-tic-u-lates in a show of petulance. Laura de la Fuente's presidential biographer also has a funny linguistic tic: the thickest Bah-stahn accent this side of an Affleck flick. Then there's Lilli Lopez's hilarious press secretary, an excitable party girl who's always trying to restore order and inevitably creating more chaos.

This early in the run, not all of the characters had clear arcs or relationships – de la Fuente's biographer at one point admitted to being a spy and later hit on the first lady, revelations with plenty of storyline potential, but neither was taken anywhere, and though LatiNacional revolves around Fernandez's Presidente, he mostly played off others rather than establish a strong personality of his own. Still, the foundation for a show on the level of Latinauts is there, and it will take only a few more walk-and-talks for Prima Doñas to turn this Latinx West Wing into "must-see telenovela."