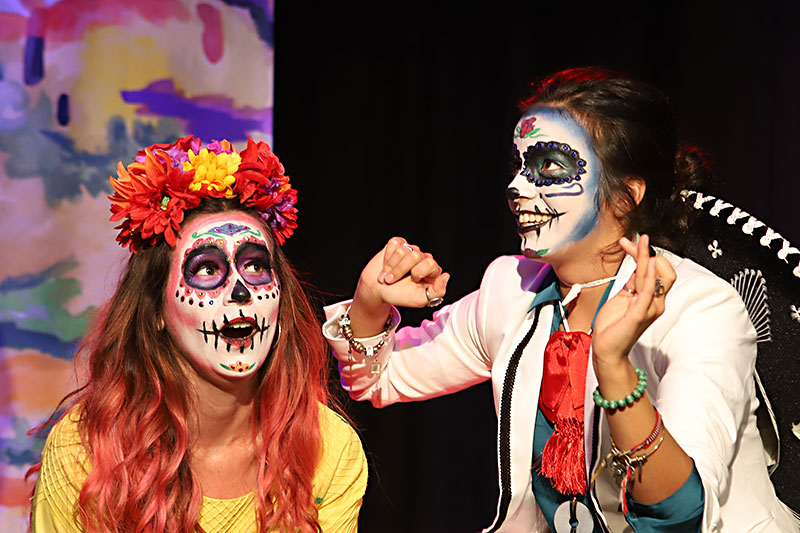 Jessica von Schramm (l) and Espi Rivadeneira in La Vida de los Muertos. For a gallery of images of the full cast, go to austinchronicle.com/photos. (Photo by Shelley Hiam)

Not yet changed out of their bright costumes and excellent sugar-skull makeup, Cat Drago and J.R. Zambrano rush to claim a vacant table at the Hideout Theatre's busy storefront coffeehouse. Riding the high of a sold-out performance of La Vida de los Muertos, a fully improvised two-act play set in the Día de los Muertos-inspired "World of the Dead," the two directors/performers begin fielding congratulatory texts and calls from family and friends. "My friend just asked if the show was really 100% made up on the spot," says Drago. The two exchange glances before bursting into laughter, appearing to onlookers as a pair of jovial, otherworldly spirits. "Why is it so hard to convince people this is all made up?"

Honestly, the fact that some audience members are left wondering if the show was, in fact, a scripted production is understandable; not often does an improvised performance feature as grand a scope as La Vida de los Muertos. "We wanted to create this atmosphere that tells the audience, 'You're stepping into another world,'" says Zambrano. "Rules don't apply in the same way you're used to." Bookended by live performances from Crockett High School's Mariachi de Oro performance group, La Vida combines a cast of seasoned Latinx improvisers with inspired sound, lighting, and set design to create an experience that's both fantastical and deeply rooted in Mexican tradition.

“We wanted to create this atmosphere that tells the audience, ‘You’re stepping into another world. Rules don’t apply in the same way you’re used to.”

Though grand, La Vida's atmosphere is one that envelops its audience slowly, as a python does its prey. In the show's first act, audiences laugh as improvisers build the lore of the world of the dead via peculiar characters and rapidly flowing dialogue. Cast members impulsively toy with – and occasionally fumble – directions in which to take the show's narrative. It's only as the performers gain their footing in this uncertain, fanciful setting that the underlying, deeply familiar face of the show is revealed. In Act II, not a single emotional beat is missed as the performers flesh out their characters' hopes, flaws, and motivations, steering the conflict toward its climax. It's these outlandish characters' undeniably human qualities that resonate so deeply with audiences, who don't realize the true extent of their emotional investment until they're tearing up at the show's finale. "Acting in the moment while still trying to create a beautiful story arc is its own beast," says Drago. "When you're truly able to pull it off, however, it's indescribable."

Though La Vida is performed off the cuff, it'd be inaccurate to say the production involved zero formal planning. "The show's been over a year in the making," says Drago. "The endless behind-the-scenes work was far more involved than we anticipated." Motivated by the show's important subject matter, the directors were determined to see production through to the end. "From the start, we knew we wanted to do a show set in the world of Día de los Muertos," says Zambrano, "one that made a space for Latinx voices and embraced our shared culture and folklore."

Coming from Latinx backgrounds themselves, Zambrano and Drago knew firsthand the spiritual significance of the holiday and that improvising a play around the subject would require the utmost care and sensitivity. For this reason, the duo decided early on that La Vida should feature an exclusively Latinx cast. "We wanted to honor the families that love this tradition," says Zambrano. "[Having a Latinx cast] gave us room play with the folklore and spirituality of celebration, as it's – in some way or another – a part of all of our lives."

Crucial as it was, assembling a Latinx cast was only one part of creating the show's extravagant yet authentic feel. For all involved, achieving this desired tone meant understanding the culture surrounding the celebration. "My research involved seeing how [sugar-skull] makeup was employed in traditional festivals," says La Vida makeup designer Alonso Salas. "We didn't want the makeup to look like gimmicky Halloween costumes. We wanted it to respect the culture, as if it came straight out of a Día de los Muertos celebration."

While La Vida de los Muertos is a production that succeeds in its goals of celebrating Mexican culture and amplifying Latinx voices, that's not to say it's the first of its kind to do so. "There's been a – relatively new – push for increased representation in the Austin arts scene," says Zambrano. "It's no secret that improv has, historically, been a white man's game."

In recent years, Latinx-helmed productions such as Latinauts – Prima Doñas' series of improvised, sci-fi-influenced telenovelas – and Gentrifucked, the Latino Comedy Project's socially conscious, B. Iden Payne Award-nominated sketch show – have challenged this exclusive notion, proving that the demand exists for Latinx inclusion in the arts. "Shows like those blazed the trail for La Vida," says Drago. "I teared up watching Latinauts. It was absolutely wonderful to see my culture presented onstage in ways I've never seen before."

For Drago, who's labored for almost a year to bring her vision to life, La Vida is the latest creative milestone in a growing movement of Latinx inclusion, a movement that shows no signs of slowing. "In improv, there's this rule of thumb called 'Yes, and ...,' which is about accepting and supporting one another's offerings and ideas. That's a perfect metaphor for this movement. When somebody has that spark, and everyone within the community accepts and builds upon it – saying 'Yes, and ...' – there's a lot of magic that can happen."

Most high school musicians would consider performing for a packed house alongside some of Austin's most talented creatives to be a daunting undertaking. For Crockett High's Mariachi de Oro performance group, though, it's just a typical Saturday evening. Perhaps the city's busiest high school mariachi ensemble, the group has become quite active since coming under the instruction of classical guitarist Ron Hare in 2014.

"When I took over this program, the students told me they'd only performed twice in the past year," says Hare. "As of right now, we're already hitting our 20th performance since late August." Playing a variety of events from private parties to cultural celebrations, Hare's students have numerous opportunities to showcase their talent. "I tried taking every offer we could. I teach my students that showing up on time and being professional is 80% of the gig." Requests for their talents has become so great that Hare has had to get creative. "Oftentimes I'll wind up turning the request over to my students. These kids are professionals, they have their own business cards. I'd say it's rewarding part-time work, to make money performing as their own group."

Though its schedule was already packed, Mariachi de Oro was more than eager to accept the opportunity to perform as part of La Vida de los Muertos at the Hideout Theatre. "I was drawn [to La Vida] because it's a genuine performance. The mariachis are a natural part of the show, not shoehorned in like at other events." Though only a few weeks into the Hideout stint, the gig is already opening doors for the group. "Someone from ColdTowne Theater reached out to us recently about performing with an all-female production. I'm certainly interested in that, since I've been wanting to set up a subgroup of all lady mariachis for some time now."

A version of this article appeared in print on October 12, 2018 with the headline: Una Vida Improvisada