CB Goodman's play is memorable for its exuberant satire, but an abrupt hairpin turn toward the serious makes the show even more memorable 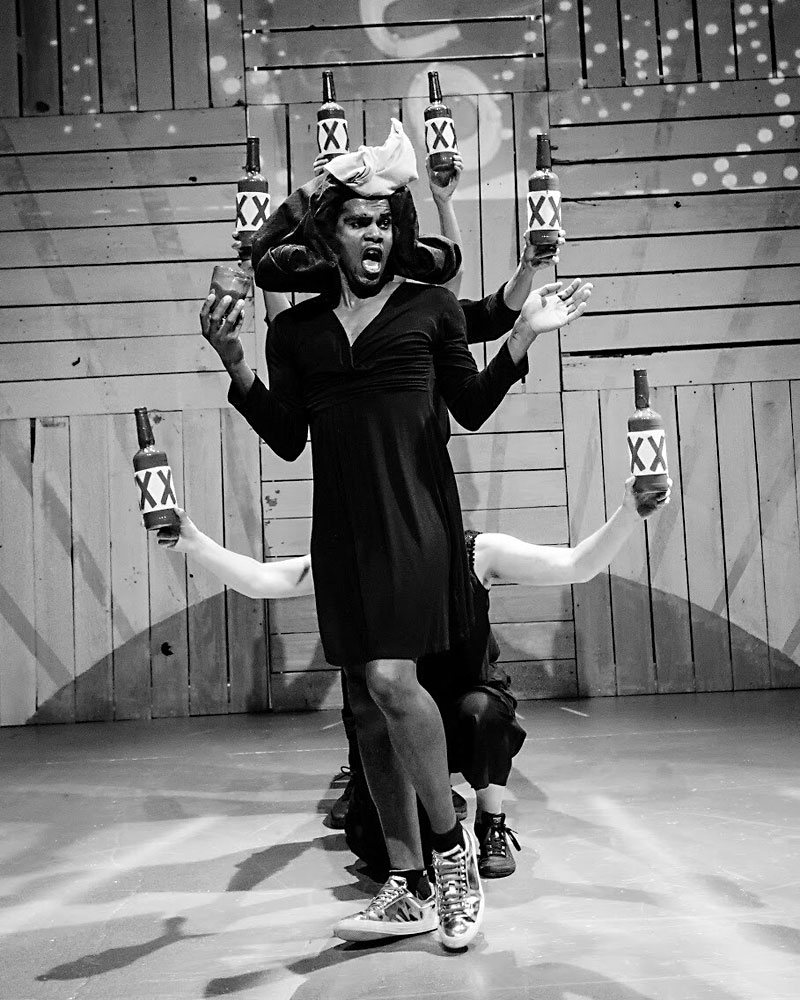 "It's all fun and games until someone loses an eye!"

That overblown parental admonition has never really had much relationship to reality, in my experience. (If it did, the streets would be full of a lot more horseplay-lovin' bros sporting eyepatches.) But the phrase seems apt for describing *some humans were harmed in the making of this show. Not that anyone in En Route Productions' world premiere actually gets blinded, but it is all fun and games in the play by CB Goodman until it isn't.

For the first hour or so, we're the audience for – by which I mean we play the audience for – a self-help seminar in which our inspirational, aspirational host, Helen, tries to rouse us to take control of our lives through a dramatized version of her own unfortunate life – thrift store owner, alcoholic, hellish marriage, etc. – and her discovery of the path to success, replete with a representation of Tony, the guru who self-helped her to find a new way. Goodman, who also directs the show, recognizes the combination of con job and vanity that fuels the self-improvement racket and presents it to us through the lens of a circus. Hanging from the wooden-pallet walls of Ia Ensterä's set are painted sideshow-style banners, and on the floor is a center ring with bright blue and red stripes radiating from it. Holding forth from it is Ellie McBride's Helen, who weights her proclamations with all the drama and self-importance of a ringmaster. The theatrical biography she introduces is essentially a clown show, with white, female Helen portrayed by a black male. That would be the wildly gifted, fearless Delanté Keys, amped up to a level of manic energy that would leave the Road Runner standing in the cartoon dust. Keys' comic turn as Thrift Store Helen is so over-the-Big-Top, he may also qualify as the show's high-flying acrobat, defying death in a slip and cartoonish wig. If the show has an animal act, then it might be Katy Taylor's hilariously intense Tony, who prowls the audience like a big cat and stares down individual members like a predator mesmerizing its prey – that is, when she isn't exhorting us all to clap along with the crowd-rousing, pump-up-the-volume music supplied by sound designer Lowell Bartholomee or bouncing manically on a trampoline. All that's missing are the circus peanuts, though animal crackers are generously doled out to one and all.

The exuberance on which this satire races along inspires such childlike glee that *some humans ... would be memorable if it continued in this vein all night long. But it doesn't. At one point, the show abruptly and without warning makes a hairpin turn in tone that makes it more memorable. The circus ends – though what follows is, in a sense, haunted by the circus, or at least a circus animal: Topsy, the elephant that was executed by electrocution at Coney Island in 1903. Its spirit hovers over the play as we're shifted to a place of gravity, where actions and consequences must be considered and dealt with, where death is present and real.

Asking audiences to accept such a radical change in direction after they've invested so much in a playful party vibe is a bold move, one that risks destroying all the good will built up by your play before this. But Goodman has not made this change lightly, as will become clear if you stay with *some humans ... after its turn. The play gives us an opportunity to contemplate how some humans were harmed – and are harmed – in the world outside this play, in the society we're all part of. And as it does, the play applies the same rich theatrical invention to this serious matter as it does the freewheeling satiric material before. The result bonds the audience in a way I've experienced only rarely, as a quiet meditative body willing to sit in the silence of a stage after the performers have left. To get to that required a wealth of trust and faith on Goodman's part, and I'm grateful for it. In the end, no one lost an eye; rather, some of us gained insight.

*some humans were harmed in the making of this show