"I would say that I am always trying to be surprised when I paint something," he says. "So I am constantly pushing myself out of my comfort zone. And a lot of times it doesn't work, and a lot of times when I'm waiting for a train, I get on and I end up somewhere that I didn't intend to go. But sometimes ... I see rainbows on amazing horseshoe curves and have these unbelievable experiences."

Fast forward to January 2018: The Baltimore native, now 36, gets a call from C3 Presents asking him to design this year's poster for ACL Fest, which kicks off Oct. 5 and features Paul McCartney, Metallica, and Travis Scott, among others. Over the past few weeks, "Snapshot" delved deep into the backstory that led Hall to this career high. A decade-plus of screenprinting/painting in Philadelphia and riding trains to offset internal restlessness led Hall to Austin in 2012. He and wife Heather moved to their Smithville home studio (pictured) in January: "There's a relationship between sitting and spending two days under a bridge where you're waiting for a train to stop and my studio practice of sitting and staring at a piece of paper for eight to 12 hours a day," he says. "They are also sort of both ways of connecting with networks of people, despite having extremely antisocial tendencies." 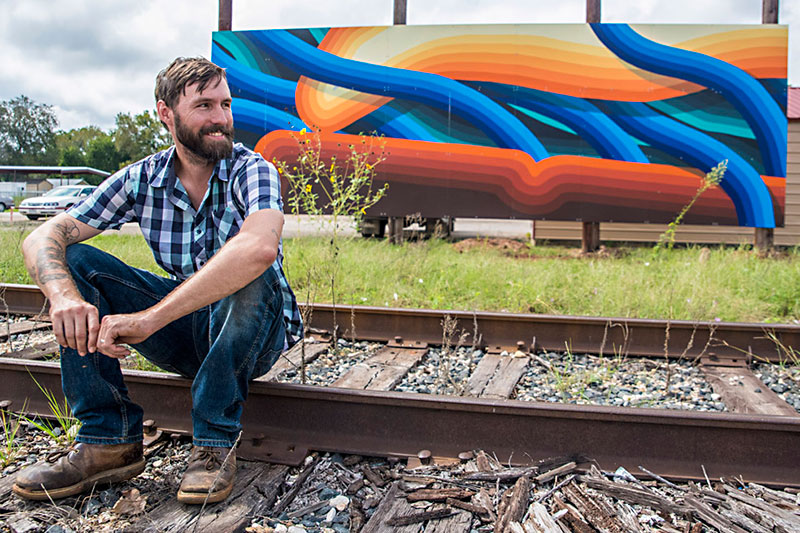 Around that time, concurrent with the ACL poster offer, he was commissioned by Smithville to paint a mural (pictured) inspired by train engines and the adjacent Colorado river, which he completed/mounted by the town's trainyard on Sept. 11. "It's the same size and height as a boxcar," Hall says. "I like that it's sometimes gonna disappear in the train yard, blend right in." 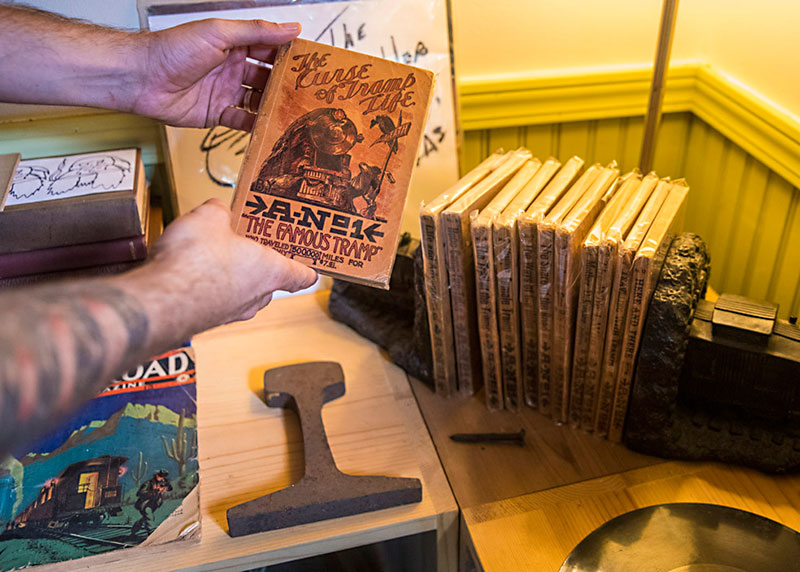 Living just blocks away from the Smithville trainyard, Hall is surrounded by inspiration related to his past adventures, including this collection of memorabilia in his home studio that comprises relics from travels and books from the early 1900s by pioneer train stowaways: "I like all of my work to usually look like you could reach into it and find things that are sort of hidden, like these subcultures or secret societies. I always want it to feel like there's more going on." Previously, Hall's largest Austin-area piece was this mural residing inside Facebook's Sixth Street offices, which emulates a view from inside a cave at Palo Duro Canyon: " I like to paint these things that almost look like they're portals into other places," he says. "I like there to be a lot of motion or action in it [and] that people can see whatever they want in it." Hall's ACL Fest poster design (the first horizontal in the fest's history) aims to evoke sound waves and the hues of Austin's "famous Violet Crown sunset" cast over the skyline, framed by Barton Springs' intense aqua. His first screenprint project in years, it's tied to his past, including train-hopping: "I don't get to travel nearly as much as I used to when I was riding trains, so it feels like this sort of exploration," he says. "It feels like a natural stop on my journey to come back to screenprinting."