"Matt Rebholz and Rachel Wolfson Smith: We Can See Through Time" at ICOSA

Drawings in red and blue ink, intended to be viewed through 3-D glasses, pull the viewer in to landscapes that make the familiar look alien 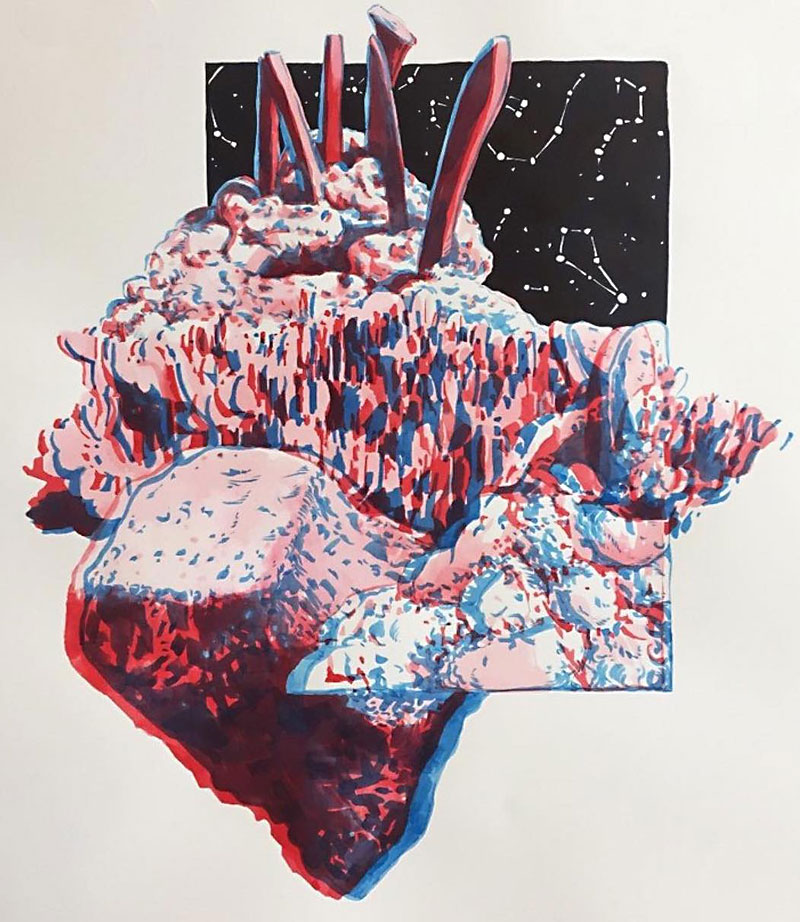 Step into ICOSA gallery, pick up a pair of glasses, put them on and look around at the otherworldly landscapes on display. Are we in the future or the past? Unclear and, more to the point, unimportant. In "We Can See Through Time," time, like the optics of the works, is illusory.

To that end, the pieces recall vintage fantasy and science-fiction book covers, referencing retrofuturist tropes and often framing a composition within a centering orb or hexagon. In the background, there are glimmering stars, and in the foreground, there are plants and rocks, a melding of the nearby and the faraway that manages to make the familiar look alien.

The starry skies are not just twinkling stars, but mapped constellations, which, when paired with the rugged landscapes, lend an air of exploration and discovery to the works. Constellations provide a means of understanding what is unknowable in any other way, an ascription of myth to our infinite surroundings and a means of charting its movement against ours, or rather ours against its. The landscapes are conspicuously empty, devoid of animal life and seemingly thriving for it.

Visitors receive a custom pair of anaglyph glasses, the older 3-D glasses with one red and one blue lens. To cater to the visual trick, drawings are done in midcentury shades of red and blue, as well as black, ink. The gallery becomes a visual game, sliding the glasses up and down. Glasses on: Craggy succulents and pitted rocks jump off the page as stars pulse and glow in the background. Glasses off: a blurry arrangement of distinct red and blue strokes. Glasses on again: Everything pulls back into focus. It is an undeniably fun viewing experience.

Smith and Rebholz play to the visual effect in different ways. Smith's Weeds, Gradient and Weeds, Scatter focus on the ground and the patterns of simple flora rendered in visible, chaotic strokes. The drawings seem like camouflage without the glasses but with them come into focus in a way that feels revelatory.

Rebholz, on the other hand, presents solo works that seem more opaque. The brushstrokes are there, but you have to search for them. Bridge shows a sort of portal, a trippy drawing whose hexagonal tunnel lures the viewer in and promises on the other side a world where the stars are within reach. He presents a more staged 3-D experience. The viewer is sucked in.

When the two collaborate, as in The World Has Moved On, the largest piece in the show, these two approaches come together to create a sparser snapshot of a brushy landscape, laid out in a way that pulls the viewer in to find a trail and set out on it.

Anaglyph glasses create an amalgam of two separate images in your mind, the blue smudging out the red and vice versa, producing an unreal image that nonetheless seems more real than either isolated part. As an accompaniment to collaboration, the lenses work as a metaphor, a means of taking in separate and distinct output and creating something new and magnificent, a process something like magic.

“Matt Rebholz and Rachel Wolfson Smith: We Can See Through Time”