Capital T Theatre's The Goat, or Who Is Sylvia? 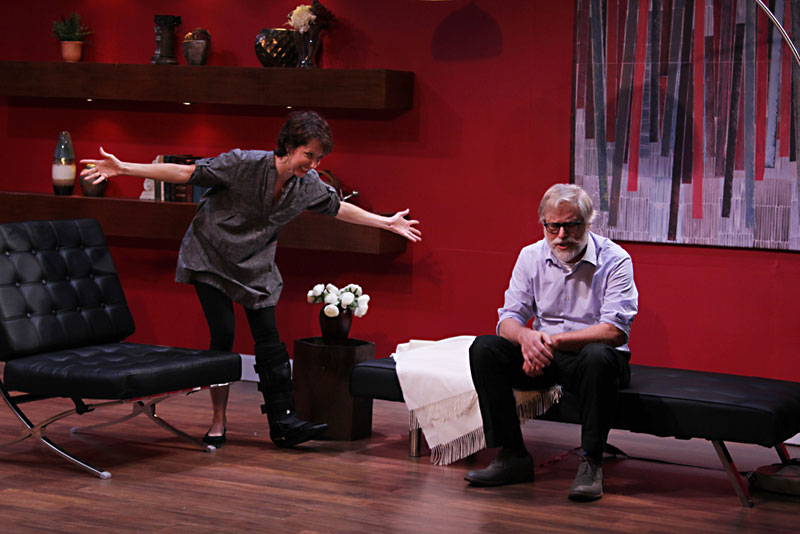 Rebecca Robinson and Robert Pierson in The Goat

On being informed by a friend that her husband Martin has been having an affair with a goat, Stevie relates her reaction to the idea of the brilliant, Pritzker Prize-winning architect to whom she has been happily – most happily – wed for many years stepping out on her with livestock like this: "Well, I laughed, of course: a grim joke but an awfully funny one. ... I shook my head and laughed – at the awfulness of it, the absurdity, the awfulness; some things are so awful, you have to laugh – and then I listened to myself laughing, and I began to wonder why I was – laughing. 'It's not funny when you come right down to it, Ross.'" She stops laughing because she realizes it wasn't a joke being played by this friend. "It was awful and absurd, but it wasn't a joke."

In that speech, Edward Albee encapsulates the response of many audience members to his 2002 Tony winner for Best Play. In imagining that a top-of-his-field professional in a blissful marriage might resolve a midlife crisis not by racing around in a cherry-red roadster or with a redhead half his age but by falling rapturously head over heels for some caprine coquette is so absurd and so awful, you have to laugh. But it's no joke. And while you'll find plenty to laugh at in Capital T Theatre's production of The Goat, or Who Is Sylvia?, you'll likely discover that the work overall is no laughing matter. With his choice of Martin's love interest, Albee isn't getting in a dig at bourgeois American values or making a case for bestiality as the next horizon for the sexual revolution. It's more a means to an end: a transgression so beyond contemporary society's comprehension that it cannot be sanctioned or forgiven. It "shatters the glass," as Stevie says. It is tragedy. Capital T Tragedy, as the Greeks defined it.

Martin, it turns out, can't see the house-crumbling catastrophes being precipitated by his actions any more than Oedipus or Agamemnon could. All he knows is that his love for Sylvia the goat is pure, transcendent, and it leads him to overestimate his own ability to make people understand that and to underestimate the degree they feel revulsed and, more importantly, betrayed by his defense of it. Here, Robert Pierson brings such an earnestness to his portrayal of Martin that the attachment to Sylvia is soon drained of any comic juice. As Martin, he speaks of his barnyard paramour in such hushed and reverent tones that he seems truly lost in a fog of feeling like none he has ever experienced before, and we're persuaded of his sincerity. But his loved ones are another matter. No matter how desperately Martin wants them to understand the wonder of this relationship – and Pierson gets positively anguished on this score – they see only its unnatural quality and an infidelity that is all the more abhorrent for it.

As Martin's friend Ross, the first person in whom Martin confides, Tim Blackwood shifts from joking disbelief to unbridled disgust with a swiftness that shows how quickly friendships can erode when social norms are crossed. In Billy, the teenage son of Martin and Stevie, the rapid erosion is of paternal ties, with a young man on the brink of adulthood challenging his father who is a traitor not just to him but to his mother – sound like any Greek tales you might know? – and Preston Ruess fills himself with rage, as if it will swell him into something larger and more mature that can strike down his faithless father. But no one's rage here matches that of Rebecca Robinson's Stevie. As the truth of her husband's actions comes clear to her, her Stevie becomes a Hellenic Fury, spitting bitter gibes at him, smashing plates and vases and otherwise making a ruin of their beautifully appointed upper-class living room (the elegantly tasteful creation of scenic designer Mark Pickell), and vowing to bring him down as he has brought her down. Robinson certainly doesn't ignore the soft and witty sides of her character; in the first scene, she makes clear the honesty of Stevie's deep love for Martin, and she makes a great game of Albee's characteristic wordplay, which is abundant here. But it's in her midnight-black anger and desire for retribution that we can see most vividly why Albee subtitled this play Notes Toward a Definition of Tragedy.

On the top shelf of the set, atop a copy of Bulfinch's Mythology sits the small bust of some Greek god or hero, looking down on all this as if from Olympus in days of old. Given the deftness of Pickell's direction and the hubris and destruction he has brought to this stage, that little god might well nod in approval that this is indeed a tragedy.