On the first Sunday of the month, One-2-One Bar gives musicians an outlet to show another side of their artistry

On Sunday afternoon around 5pm at One-2-One Bar, a group of art vendors begin packing up their products, and one approaches co-owner Destinee Ware with a tip. "I don't take money from anybody," she says, respectfully declining the cash. "Nobody pays."

Whereas most art markets charge a fee to sell, no-pay-to-play is crucial to the ethos of the Southside venue's monthly Austin Musician-Artists Market, which for the past year has hosted about 15 musicians selling their other physical art on the first Sunday of every month.

"I've found that a lot of musicians are creative in lots of other areas as well," says Ware, who's operated One-2-One with husband Gregg Ware for nearly 15 years. "That's the goal: Anything that you can do to help support local artists and get them more money in their pockets is a good thing right now. Everybody's struggling."

As "Snapshot" learned during the Sept. 2 event, the type of musicians and art sold runs the gamut, from rockers, folk, and jazz artists selling paintings, handmade jewelry, clothes, and even perfume, often as an equally viable income stream. 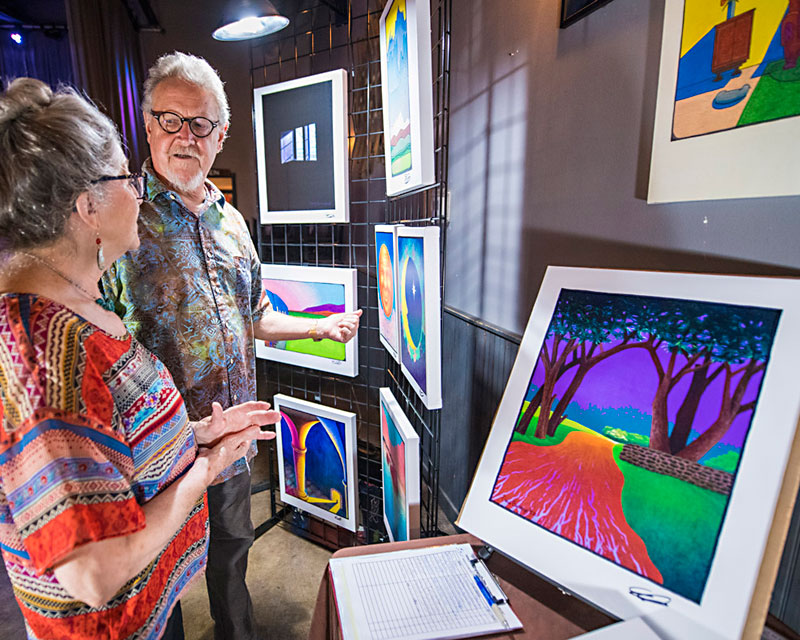 Ernie Gammage (right), member of the Lost Austin Band and a professional Austin musician since 1963, sells prints of paintings made in the Seventies while living in England, or as recently as 2006: "I think people forget that folks who have undertaken a creative endeavor like music need other outlets [and] there are so many musicians here that have other skills. All of these people are a testament to that," he says. "I like doing stuff I don't know how to do, and I didn't know how to do any of this, and it was all an experiment." (Photo by David Brendan Hall) 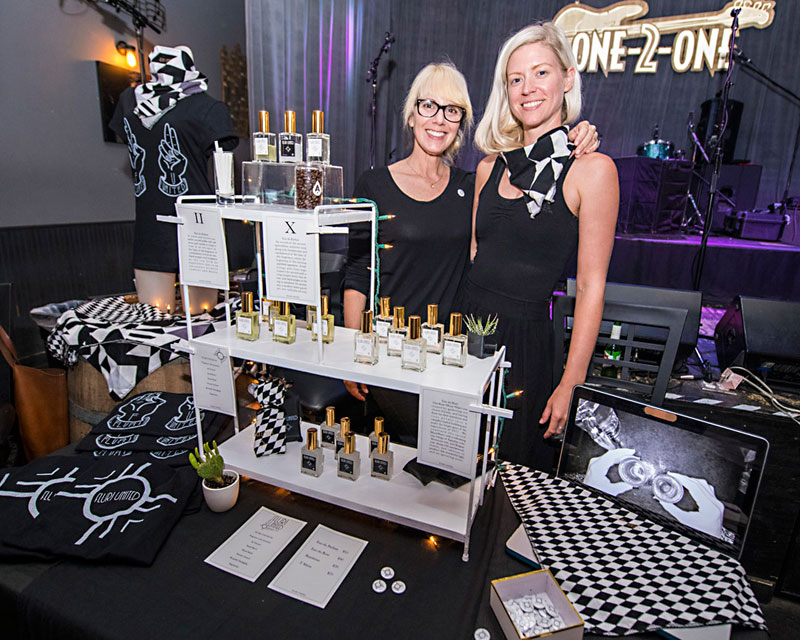 Josie Fluri and Hope Irish, musical collaborators in several projects, launched all-natural, organic fragrance company Fluri United last December, a full-time business (not just a side hustle) partially inspired by musicmaking: "You write a song, and there's infinite possibilities," says Fluri. "In perfume, when you set up all of your oils, it's called an organ, and you have these top, middle and bass notes, and in these, you create chords. It's called an accord [in fragrances]. This, for me, is like music. If I don't make money doing it, I will still be doing it at this point. And if I do, awesome." (Photo by David Brendan Hall) 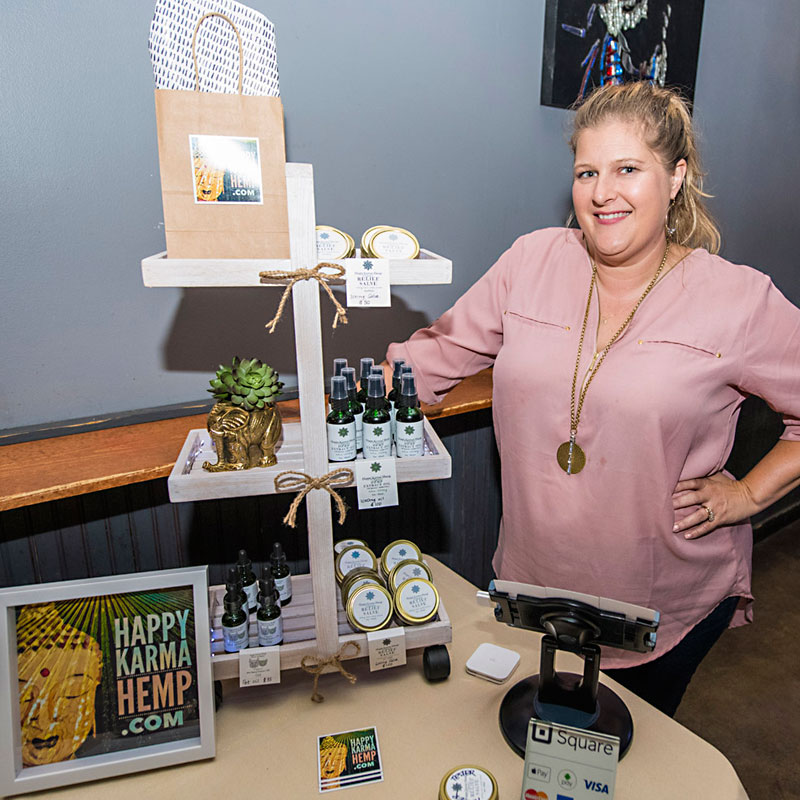 Laran Snyder, harmony vocalist in the Patrice Pike Band and 20-year massage therapist, recently launched her own line of hemp-derived CBD products (Happy Karma Hemp), which don't directly relate to music, but hinge on the karmic relationships of local music industry professionals: "Destinee and Gregg are up against the California man who's coming in and pushing the musicians out of Austin, and they're trying to hold onto this place by being open for this," she says. "We're all artistic, but in different ways, so it's a way for us to support each other. I believe in 'what goes around, comes around.'" (Photo by David Brendan Hall) 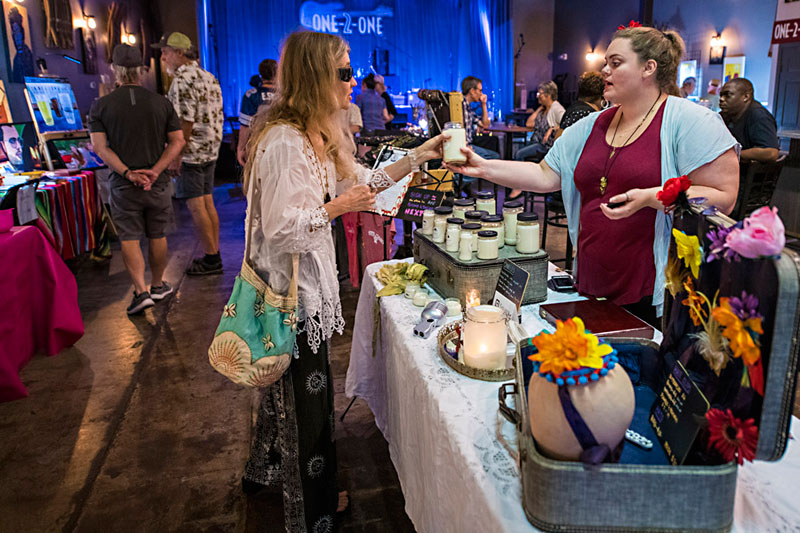 Jazz singer Anslee Connell (right) of Savannah Red makes candles with scents based on her song titles, with each label sporting an original lyric. These factor into her regular band merch setup, but also garner significant revenue at this monthly market: "When somebody has a candle that's flavored after one of my songs and they play the song, they'll associate the two," she says. "I was part of the first market [and] I've made some really great relationships with some musicians that I probably would've been too intimidated to talk to." (Photo by David Brendan Hall) 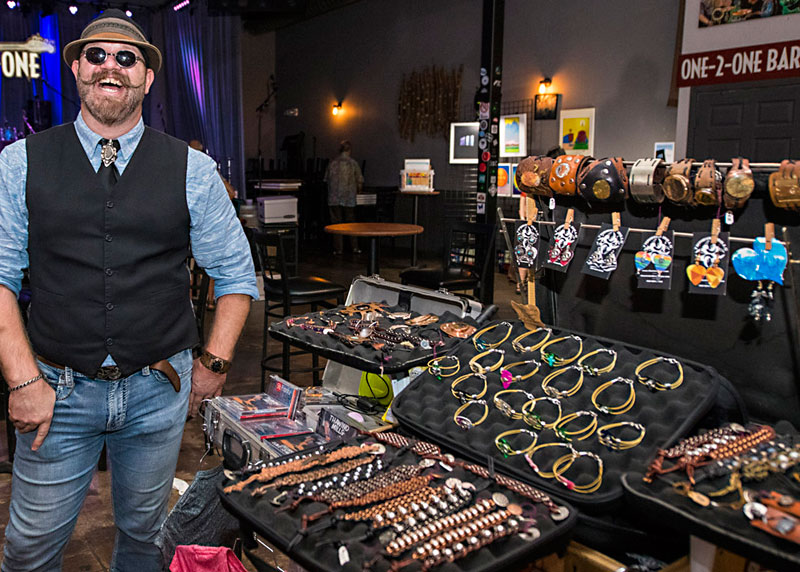 Looping artist/guitarist Thawind Mills, who makes jewelry – some from old guitar strings and other musical bits – insists that art markets like this are vital for musicians' survival: "Typically, most markets will charge you anywhere from 30 to a hundred bucks to come and sell, whereas [Destinee] does not," he says. "We need this so we can continue to feed ourselves, make rent, because as they gentrify East Austin and everything else begins to change, rent soars." Ware says it's equally necessary for One-2-One's well-being: "To be honest, our property tax at this location went sky-high and I was like, we've gotta find something that we can do outside of normal business hours to bring in a little extra revenue." (Photo by David Brendan Hall)