This new work of dance-theatre takes us on journeys through wild wastes and personal histories, but leaves us in a place of hope 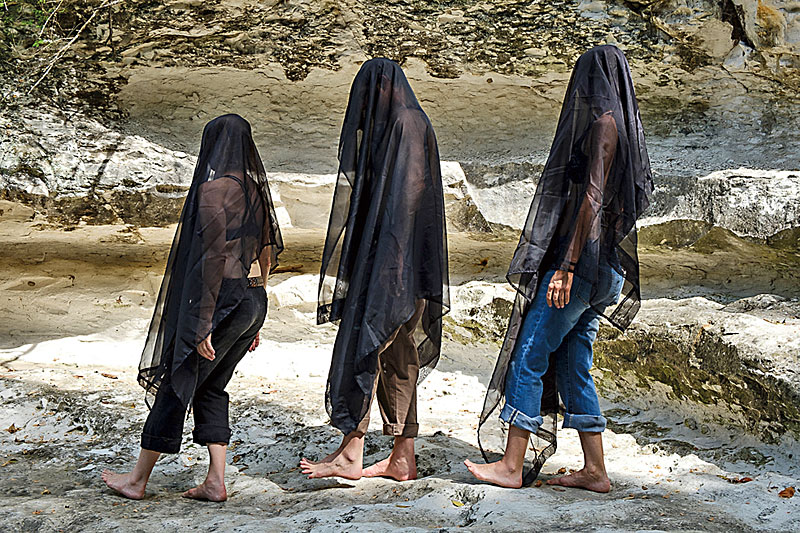 Two figures, shrouded in black, walk in silhouette across a desert landscape. Though we have no clues as to where they come from or even who they are – their bodies are swallowed in black cloth, their faces obscured by veils – the scrub they trudge past and rocky, rough terrain, with mountains glimpsed on the far horizon, suggest they have traveled a great distance and may yet have a long way to go to reach their destination.

Three people place calls on an old, weathered pay phone standing in a corner of the stage. Though the phone numbers are spoken aloud, who is being called is not always made clear. In one instance, no one answers, or the caller hangs up without speaking. In another, the caller converses briefly with his grandfather. In a third, the caller seems to be free-associating words connected to coal. Even without details about these people, the dated device being used and something in the language (or lack of it) hint at the callers making, or attempting to make, contact with their past.

In every step of Landfallen – the lost and found, a new work of dance-theatre by Jason Phelps & Co., we are conscious of journeys – hard journeys being made through wild wastes and through personal histories. Of course, this being a time when our news feeds and the political speeches aimed at us are overflowing with tales of refugees and migrants, legal and illegal, some of what's seen here naturally calls to mind the passage of people from their homelands to countries where they hope to find safety and a better life. The vision of the travelers in black, provided by Ana Baer on video, does the most to evoke this, the landscape recalling the barren wilds of South and West Texas and the freight train in it being at times a means of traversing the great desert distances, at times a form of danger. Running almost continuously throughout the performance as background to the three dancers onstage, the video constantly reminds us that even as we sit in the Ground Floor Theatre watching it, somewhere not far from us, people are risking all they have on this arduous crossing.

In the space before the screen, live movement created by Phelps, Margery Segal, and Dany Casey also speaks to the difficulties of passage. At one point, the trio run forward at full tilt across the stage, then stop abruptly and run backward, then run forward again and then backward again – a sign of advancement being impeded or reversed, perhaps by an external threat. At another, Phelps crawls across the stage on all fours, at once conveying the idea of minimal progress and exhaustion. Phelps and Segal then stop moving altogether, lying on the floor curled into balls, their backs to the audience, the only physical expression visible to us being their wiggling toes.

All three performers communicate well with all parts of their bodies, but I found myself most closely attuned to their hands: a distressed-looking Phelps using both of his to hold up his drooping, heavy head; Casey positioning one of hers in front of her body, as if to absorb the shock of anything she might run into; Segal extending both of hers into a pool of light, fingers wriggling as if trying to feel the photons as they drift through them. In the gestures and motions of these migrants, we could sense: This is how we move through the world, feeling our way.

Much of Landfallen speaks to hardship, but in the end it also offers notes of optimism. Some of it shines through in the chirpy radiance of the score, drawn from Vivaldi's Four Seasons as recomposed by Max Richter. It's ascendant, and those hands, so often held low, rise with it, reaching above the dancers' heads. In one final phone call, Phelps reassures the person on the other end of the line: "Don't worry about me." The long and difficult journey may continue and the destination may still be too far to see, but hope is in sight.