Make a space with a DIY approach to art and a Burning Man vibe, and you get the wildly popular Cherry Cola Dog 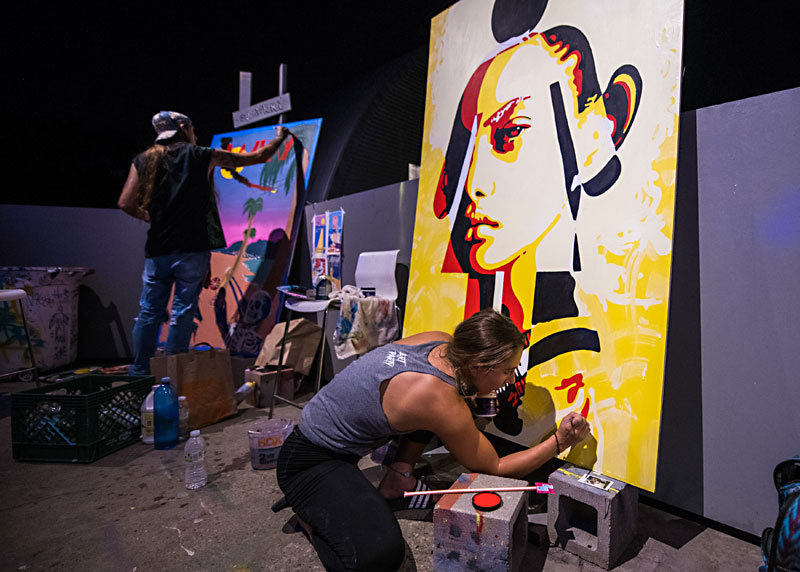 In 2009, Mike Grey chose the one toward savasana and spandex – the one that led him to found Black Swan Yoga – over the one toward artistic aspiration. "I very quickly realized that I'm better at teaching yoga," he says, skill being the difference between paid rent and food.

Four years after selling that company, he's lapped back around to the road not taken, clarifying that what he's really good at is creating singular spaces for gathering, whatever their focus.

Every Saturday, up to 400 people show up to buy art, make it, party, breathe fire, dance, and bask in the positive glow of a space that has branded itself as a creative nexus for a new arts scene of its own making.

Cherry Cola Dog is where the second path led. Housed in what was once a metal scrapyard, the warehouse and open-air space draws inspiration from the East Austin Studio Tour, HOPE Outdoor Gallery, and, most importantly, Burning Man, which Grey has attended for the past eight years and is deeply influenced by. Every Saturday, up to 400 people show up to buy art, make it, party, breathe fire, dance, and bask in the positive glow of a space that has branded itself as a creative nexus for a new arts scene of its own making. The weekly parties showcase live painting, live DJs, and fire dancers, and are BYOB, a component that contributes to the communal, backyard feel.

Cherry Cola Dog is too irreverent to be compared to a traditional gallery and too polished to be an underground spot like the Electric Church. It exists somewhere in the space between: not solely an artspace, not quite a venue, certainly not a bar. Grey originally envisioned it as a hangout for artists, but evangelists are fond of calling it an "experience," an original whole of various parts that Austinites have seen before.

As a whole, the art is graphic, visual, poppy, and colorful, with clean lines, abstractions, and a general tattoo sensibility not dissimilar to the creations of HOPE Outdoor Gallery or SprATX artists. It's not realist, or subtle. Most important, it's not curated: Some work is better than others, as anyone with $20 and a paintbrush can hang a piece to sell.

And the pieces at Cherry Cola Dog do sell. At their signature Art Will Save Us party held in mid-August, I counted 13 of the more than 40 wall pieces sold before I left at 1am, plus four of the 10 completed live paintings. Laura Cauldron, who bought her first three original pieces of art at her first Cherry Cola Dog event this month, cited the affordability of the pieces, which can range from $25 to $1,000. 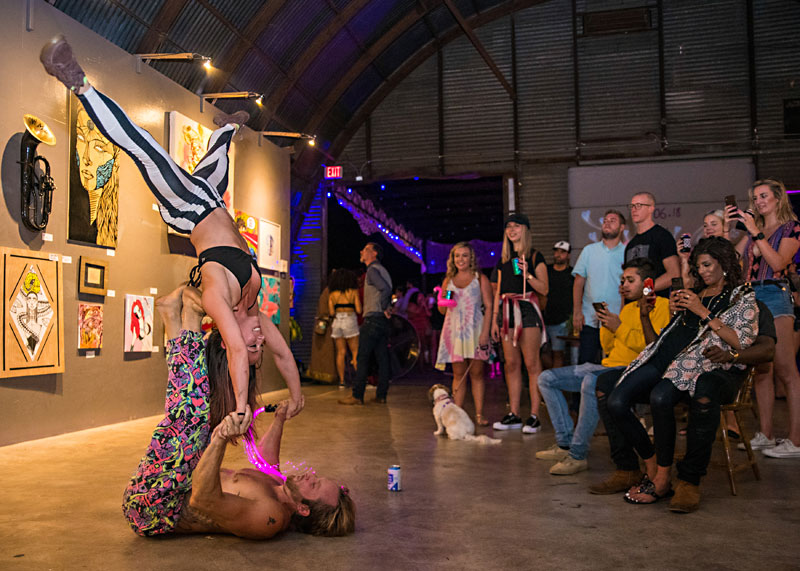 The venue's business structure – the submission fee, plus a $10 entrance fee for attendees – allows artists to take home 100% of their sale. The art party held once weekly, plus Cherry Cola Create, a paint/sculpt/write/draw night held on Tuesdays for a donation of $5-10, are the venue's only sources of income. Initially, the space held curated exhibits and even solo shows, but Grey refocused. "This space really is – it's for everybody."

Grey is telling me this as artists set up large wooden panels for painting at one of the weekly art parties. While we talk, artists approach him seeking his advice on their planned designs or help setting up. At one point, he pauses in the middle of an unrelated thought, sidetracked thinking about how awesome one of the crew members is. It happens a lot talking to Cherry Cola Dog members: effusive praise about the people, the space, the art, the community.

"What we're all trying to do is create this amazing little community of artists and creatives and performers and musicians and have this little – not little anymore – this big collection of just creative energy," says artist Justin Haggerty, who helps Grey coordinate the live painters. "It's intoxicating."

Cherry Cola Dog artists describe a dearth of competition and a wealth of opportunity and room for growth. Haggerty and newcomer Danielle DaVerona are showing in traditional galleries for the first time through connections they made at Cherry Cola Dog. In fact, Haggerty hadn't even painted physical art before becoming a live painting staple at the space – he was previously a digital artist.

"You feed off of it and you want to give back as much as you can. And that's what that energy is," says Cody Mason, who is part of Cherry Cola Dog's DJ network. "There's no tally system. There's no tit for tat, there's no ladder climbing, there's no one out networking. Everyone's out there to actually have a good time. But we're also achieving things."

And then there's the party portion of the experience, which can credit Burning Man for its vibe and tone. "I feel like it's sort of debaucherous in a way. But at the same time, it's all so out of love," says DaVerona, who likens the party to an inner-city version of the playa festival. While the beginning of the night can feel more like a traditional gallery event, with people looking at hung pieces and watching the paintings in process, the second half of the evening, with the fire dance performances as an appropriate segue, feels more like the festival life Grey was inspired by. A friend quipped about having festival flashbacks in a porta-potty with a handpainted pink wolf mural on it as booming electronic music played. The party didn't feel wilder than any other in Austin, but the debauchery did seem to have taken a hit of effervescence, like everyone was having a blast, but together.

Right now, Cherry Cola Dog is at what feels like an apex: buzzy and getting buzzier, but still fresh, not "corporate," as Mason put it, though Grey is clearly a savvy businessperson with grand plans. The future holds the possibility of taking the party mobile, to other events and festivals, including the new Waterloo Music Festival happening this weekend. In his hype way, Grey talks about the strength and spread of the positivity of this space he has created, reaching for a word that encompasses the magnitude of it: It's like "terminal velocity."

For a gallery of photos of Cherry Cola Dog, go to austinchronicle.com/photos.

A version of this article appeared in print on September 7, 2018 with the headline: Art Will Save Them