The clouds are angry in this solo installation, but the spirit of the show is doggedly hopeful, fresh, and invigorating 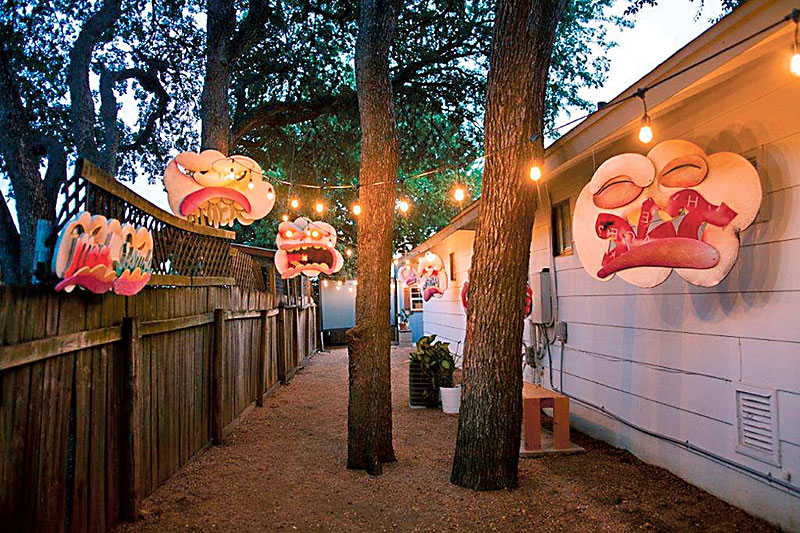 "Return of the Litvak" (installation view) (Courtesy of dorf)

It could be any house in the South Austin neighborhood: blue front door, xeriscaped front yard, a Beto O'Rourke sign staked in front. But the majority of the garage interior has been tagged with fat-lettered graffiti. On top of that hang painted and printed works, some in frames, most not, and an explanatory wall text. And in the driveway there are tables, one piled with T-shirts, two more overseen by eager operators. No, this is not just another house in South Austin. Eric Manche and Sara Vanderbeek opened DORF gallery in their home earlier this year, making this an atypical house and an atypical gallery, one born of necessity but executed with obvious intentionality.

For "Return of the Litvak," they invited street artist ANGRY CLOUD + DESCND into the space, blurring distinctions between public-facing and private-gathering even further. The show opens on a Friday night, and the vibe is less art opening, more party – specifically, the Democratic Party. Beto O'Rourke campaigners are fundraising behind one table, just opposite a voter registration table.

The works on display adopt an earnest call to civic action in line with the programming. VOTE pulses its titular message in red, white, and blue. The digital animation ripples across an iPad screen framed by painted wood and Gator Board. Nearby, a teenage boy stands behind an interactive installation, casting his eyes upward and out of the painted wood frame. Mimicking Barack Obama's HOPE campaign poster, the block text across the bottom reads "DESCND." In titling the work No More Heroes and offering the spot of presidential hopeful to any attendee, ANGRY CLOUD seems critical of placing any public figure on a pedestal. Time to bring governing down to earth.

And what's more down to earth than grassroots organizing? It's easy to slip into cynicism when considering the themes of the show. But this cynicism is anticipated, precluded. Cynic, propped in a corner of the garage gallery space repeats its title in red letters. Moving through the show, I find my hedged expectations dissolving. The combination of ANGRY CLOUD's work, a DIY artspace, and one of the most invigorating grassroots campaigns in recent memory creates an environment of undeniable optimism and motivation.

ANGRY CLOUD + DESCND's clouds are angry. Cloud characters with puffy wincing eyes and snarling scowls populate the space, painted on the walls, hanging from house siding, posted on fence slats. Made from spray paint, wood, and Plexiglas, the pieces are similar to those found on the streets around Austin.

ANGRY CLOUD explains that "Litvak" is a non-pejorative term for Jews in his ancestral home of Lithuania. Inspired by the experience of a recent trip, CLOUD references the Nazi-era genocide of Jews in the forests of Lithuania. A large sculpture made from reclaimed wood recalls repurposed Jewish headstones, used as building material in a Lithuanian theatre. These references can seem disjointed alongside more traditional street art fare like graffiti lettering and brash characters, but the show presents an accurate landscape, personal and mental, public and physical, that is cacophonous, marred by history, and doggedly hopeful. It feels fresh, invigorating, like hoping for clear skies after cloudy days. 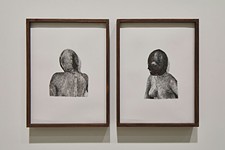