In this production, people are there for one another and no one has to face the end alone 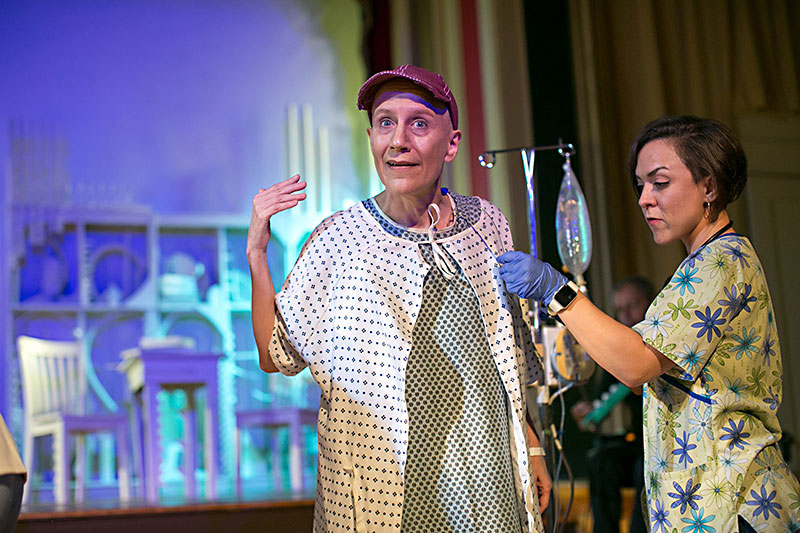 With apologies to Charles Dudley Warner, "Everybody talks about death, but nobody does anything about it." Case in point: John Donne, the 17th-century English poet whose Holy Sonnets teem with talk about the end of life – what it is, what it means, what it should be – and yet for all his insistent "Death be not proud" and "Death, thou shalt die," Donne ultimately surrendered to the Reaper like everyone else. And so will the scholar who's made the study of Donne her life's work, who can parse his punctuation for volumes of meaning, who can expound at length on the difference between small-d and capital-D Death. At the outset of Wit, Margaret Edson's Pulitzer Prize-winning drama, this scholar, Dr. Vivian Bearing, informs us that within 100 minutes, she too will have booked passage to the undiscovered country – Death will not be denied. Before she departs, however, Dr. Bearing has something more to say on the subject of mortality. This teacher, as feared as she is revered in her field, has become the student once more, and she wants to share what she's learned. Wit is Bearing's education in the process of dying.

The lessons that the play imparts are what helps distinguish Wit from the innumerable other terminal illness dramas out there and make it worth repeated viewings. As Bearing undergoes aggressive treatment for metastatic ovarian cancer, she comes to see that a keen intellect is no defense against flesh that is failing, that a life of the mind is cold comfort as death closes in and you crave nothing so much as the warmth of human contact, and that dying is a lonely business but doesn't have to be. People are all around you; you simply have to open up to them.

It's that last lesson in which this production by Austin Scottish Rite Theater seems the most deeply invested. The story is clearly Vivian's, which makes Kristin Fern Johnson the lead player here, but the other eight actors perform with such unity of purpose, such teamwork, providing support and lifting Johnson up, that their presence comes to have a meaning independent of their roles, one that says: We are here for you. Director Susan Gayle Todd has shaped an ensemble with a sense of openness and care that's evident to us, if not to Johnson's character.

But beneath the character, Johnson seems to feed off the support of her fellow actors, taking the safe space they create to dig deeply into Vivian's pain and vulnerability. She may not project all of the cerebral arrogance that Bearing is said to possess – Johnson's innate sweetness tends to shine through – but she provides every bit of the suffering. When her character must endure the "countless indignities" of her treatment – being poked and prodded in her most private parts and endlessly subjected to the ever-more-inane query "How are you feeling today?" – Johnson submits totally to Vivian's isolation and fear; her collapse into the racking misery of her character's situation is total and wrenching.

Comfort won't be found in Vivian's resident and former student Jason; he is as fervently focused on cancer as she was on Donne, and when Delante Keys delivers an ode to the disease's machinelike efficiency, his awestruck gaze suggests Jason has glimpsed eternity in cancer's endlessly replicating cells. Blessedly, Vivian's R.N., Susie, makes up for whatever humanity her doctor is lacking. Megan Ortiz's performance has an ease to it that soothes, with compassion, kindness, and good humor flowing from her as naturally as water. Then there is Vivian's mentor (Chris Humphrey, soft and gentle as a breeze), who pays a visit just as Vivian is in her greatest agony. Hers is the simplest of gifts – climbing into bed with Vivian and reading her a children's book – but it proves the most profound. The icy intricacies of Donne's philosophical musings melt away in the warmth of Margaret Wise Brown's The Runaway Bunny, leaving the dying scholar with only unconditional, unyielding love.

Warmth and empathy are the sustaining forces of this Wit – in the performances and ensemble work, in Deanna Belardinelli's lighting and Darrel Mayers' live guitar score, which fills the space with liquid emotion, an IV drip of feeling – and they lead us to an ending steeped in peace. In it is a space in which a human being may shed all that is earthly and pass into the celestial, saved from Death by death.

A version of this article appeared in print on August 24, 2018 with the headline: The Art of Dying 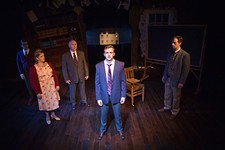 Shanon Weaver's Top 10 Theatrical Performances of 2017 (the Second Half)
The year was well-served by actors who could channel spookiness, rebellion, despair, and dance fever