Ground Floor Theatre's There and Back 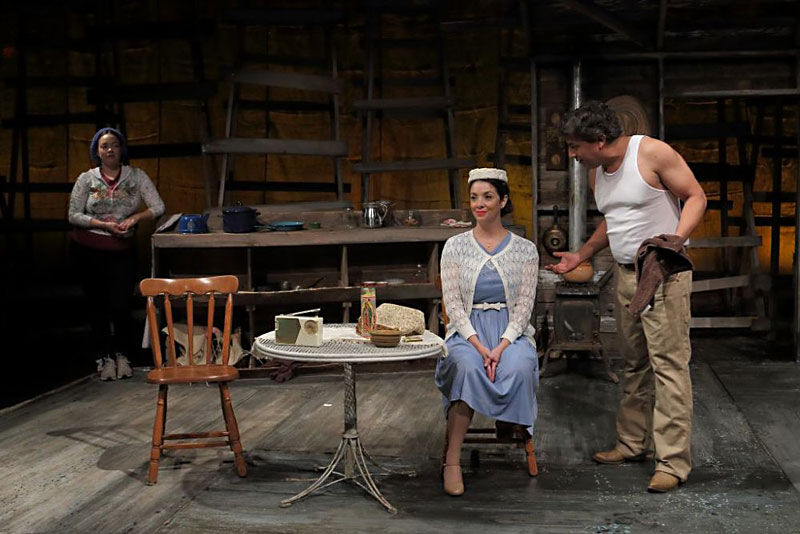 The woman making this declaration does so with a righteous fury, her eyes ablaze, her voice as hard and heated as iron from a forge. And we in the audience understand where her fire is coming from, because by this point in Raul Garza's There and Back, we've lived a lifetime with this woman, watched her from the day John F. Kennedy was inaugurated to the day Donald J. Trump was, from the time when she was a young mujer new to the United States to the time when she is an elderly abuela still ensconced in the small shack where she first joined her husband in a South Texas farmworkers' camp in 1961. She's remained there for so long – much longer than she truly wanted – because she believed she had no choice but to stay. Now, though, in the twilight of life, she has resolved to decide her own fate.

Time is key to Garza's drama. The great span of it allows us to see how much the life of this woman, Gloria, develops and changes after the fateful day she enters this country and learns that the bright future she imagined for herself and her husband north of the border is not to be. It lets us witness all the choices Gloria makes and does not make that cause her life to contract from what it might have been, from what she dreamed it would be. All that time lets us follow not only her personal evolution from wife to mother to grandmother, but also her political evolution from submissive spouse bending to her husband's will to ardent advocate for the rights of farmworkers, especially fellow migrants from Mexico. Garza cannily works into this aspect of the tale a brief history – and critique – of recent U.S. policy toward Mexican immigration, including the bracero program of the Forties and Fifties, the expansion of border maquiladoras in the Sixties and Seventies, the Reagan administration's amnesty act for undocumented immigrants, and the current administration's efforts to increase deportations to Mexico and build that big honkin' wall. With each decade that Gloria stays in the U.S. without any official status and as anti-immigrant rhetoric grows more inflammatory, her situation becomes more precarious.

The first incarnation of There and Back was only 10 minutes, as it was generated through ScriptWorks' Out of Ink program for writing 10-minute plays. That version followed the same storyline with the same characters, but its brevity made Gloria's situation something we accepted intellectually more than felt. Expanding the play by two hours lets us come to know Gloria more fully and feel the passage of six decades in our hearts. It also offers a profound gift to Karina Dominguez, who played Gloria in the 10-minute play and returns to the role here. For in Ground Floor Theatre's production, Garza and director Patti Neff-Tiven give the actor a wealth of air – space without speaking to just be in the character's skin. In the rich silence of the play's opening minutes, Dominguez, with only expression and movement, conveys the young Gloria's propriety, her nervousness at being in a new country, her revulsion at the living conditions she encounters, the comfort at finding her husband's scent on his shirt. It establishes an intimacy with us, one that Dominguez masterfully deepens in every scene, with every gesture and line. As time passes, her Gloria ages gracefully and convincingly, with every loss and disappointment carefully packed away inside her. That's why we grasp so readily the ferocity with which she finally chooses to choose. Dominguez has led us to that moment, our hand in hers.

Linked to all of Gloria's losses and disappointments are the men in her world. The three closest to her – husband Victor, son Ray, and grandson Max – are all played by Mical Trejo, who succeeds in creating three distinctive characters, each a man of his time and culture and each appealing in a different way but all possessing the same genes for masculine pride and sense of superiority, believing they know what's best for Gloria. When the pressure they bring to bear on Gloria gets to her – which is often – she turns to prayer and lights a candle to the Virgen de Guadalupe, who appears as if conjured. With contemporary dress, attitude, and language ("Bitch, please!"), this Virgen is able to speak to Gloria as a friend – her only friend. (Giselle Marie Muñoz is a delight in the part and several other roles.) Like the playwright and director with Dominguez, she creates the space for Gloria to find herself and get her from "there" to "back." It's a journey that is satisfying and thought-provoking, suggesting that it's never too late to choose that moment.

Ground Floor Theatre, 979 Springdale
www.groundfloortheatre.org
Through Aug. 25
Running time: 2 hr., 5 min.
A version of this article appeared in print on August 17, 2018 with the headline: Time to Choose