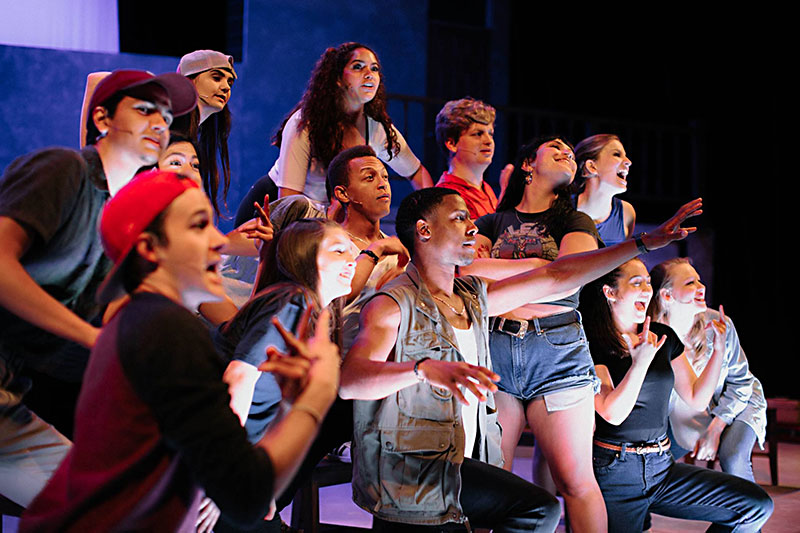 That cry is heard again and again in Rob1n, the musical update of everyone's favorite outlaw archer, and it's a big part of what makes this Summer Stock Austin show hit the bull's-eye on your heart. Along with making the bow-wielding Hood into a 21st century Latina, creators Damon Brown and Allen Robertson have expanded her mission from redistributing wealth to building community. In every encounter, this Robin stresses the importance of looking out for each other and the value of collaboration. She can't turn away from someone in need because she knows that when people come together, when they act as neighbors, when they join forces, they can accomplish anything, no matter how unlikely – like, say, "liberating" $20 million from the vaults of a certain Big Pharma tycoon.

See, in this modern-day reinvention of the medieval legend, King John has become Joan King, CEO of King Pharmaceuticals and a figure only Martin Shkreli could love. She's pushing her board on a plan to take the drug her company can produce for only a dollar a pill and jack up the price to several hundred dollars per – way beyond what someone like the mom of Robin's new friend Midge could pay. Joan never tries to disguise her disdain for the poor people who couldn't afford the drug – or all poor people, frankly. As played by Lily Myatt, Joan wears her contempt for the indigent like a pair of Manolo Blahnik alligator pumps – with pride. Indeed, on top of the whole price-gouging thing, she's plotting to lay off scores of her low-income workers and, once they can't pay rent on the housing she owns, turn them out into the streets.

Robin being Robin, she's determined to stop Joan and aid the needy, but she won't do it alone. To get what she has in mind, Robin knows she'll need her crew – "Juntos! Together!" – and she sets about assembling a latter-day spin on the Merry Men: the Rev. Tuck, a preacher with a knack for hacking; John Little, the country-boy muscle; all-purpose backup duo Alanna and Scarlett; and young Midge, whose mad skills behind the wheel make her another Baby Driver. (As the precocious getaway artist, Mariela Denson proves as wise and funny beyond her years as she did playing the elf Mel in last summer's A Shoe Story.)

In any telling of the Robin Hood tale, we love to see the outlaws take down the King and his brutish Sheriff, but our delight in that is magnified here because Robertson and Brown have recast their mission as a modern heist, replete with red-carpet gala penetration, air-duct infiltration, high-tech security deactivation, and glitch-in-the-plan improvisation. The creators have a grand time playing with all the genre's tropes and giving their youthful cast some choice comedy – comedy, it's worth noting, that pays off best when the actors work as a team. (Juntos! Together!)

Every step of the way, Rob1n finds ways to reiterate its message of togetherness. Robin's stop at the Rev. Tuck's church comes as he's preaching a sermon on being a good neighbor (a sermon in song, delivered by Vincent Hooper with a gospel fervor that inspires). A trip to the forest to show Robin's ex Marian (an appealing Donalvan Thigpen) the fate of the poor people affected by his sister Joan's cruel policies winds up with a joyous salsa-fueled dance affirming the virtues of fraternidad, hermandad, communidad – a theme we can see in the way everyone onstage moves together. (Sara Burke provides the exuberant choreography.) The message is even audible in the harmonies of Robin, Alanna, and Scarlett as they try to persuade a reluctant John Little to sign on for the heist; their way to the heart of the big man (Keaton Pugh, giving John an IQ slightly below that of his wooden staff) is a Southern-fried tune right off the Dixie Chicks menu, with the women's voices weaving magically together like those of the Sirens of myth.

As in previous Robertson-Brown musicals for Summer Stock, Robertson also handles the direction, and there's staging here as playful as the script and score. In the archery contest between Robin and the Sheriff, arrows fly, but in the hands of performers who shuffle, slide, and moonwalk them to the targets across the stage. For a car chase, colored suitcases manipulated by actors represent the fast and the furious autos. They're delightful theatrical illusions created in the spirit of the story: through collaboration. And while our Robin here is as charismatic as any Hood should be – Savanna Cole is as sharp as an arrow's tip, and her aim is true – she doesn't position herself as leader. She's all about the team, the neighborhood, the community. And oh, how that makes this Robin the hero we need right now.

Rollins Studio Theatre at the Long Center, 701 W. Riverside
www.summerstockaustin.org
Through Aug. 11
Running time: 1 hr. 10 min.
A version of this article appeared in print on August 10, 2018 with the headline: The Hero We Need 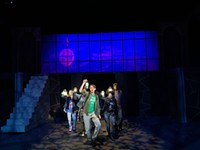