The artist probes the history and crisis of masculinity by placing beefy men in salacious tangles, exposed and unashamed 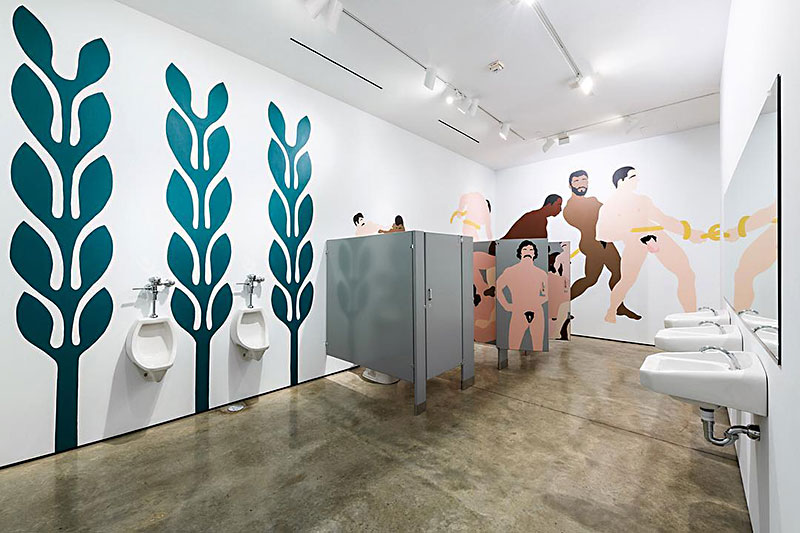 Installation view of What Makes a Man by Xavier Schipani

"History may never have seen another time when the idea of masculinity has been in deeper crisis," Xavier Schipani writes in the notes for his show at Lora Reynolds Gallery. In "Chasing Desire," Schipani probes the crisis and history of masculinity by enlarging men to heroic scale, casting them in classically athletic bodies, and then piling them in orgiastic knots. In a mural spanning the length of the room, humongous nude men tug on two sides of a knotted rope. Elsewhere in the space, men tug on themselves and one another.

Tucked behind a dividing wall is a three-stall bathroom, which, with all the stall doors closed, looks, maybe, purely functional. There are sinks and a mirror, three urinals to the side of the stall. But open any of the doors and inside is a bacchanal like those on the surrounding walls. Stepping into the enclosed area becomes more confronting, with men contorted in various positions seeming to proposition you directly.

This is not Schipani's first use of the bathroom as an installation setting. Recently, he collaborated with Jill Soloway and Refinery29 in participation with the media site's 29Rooms series. In his contribution, Schipani filled a bathroom with graffitied slogans and doodles, all centered on similar themes of gender, sexuality, and identity. At Lora Reynolds, Schipani's exploration of these themes and the space develops a tighter focus and more graceful coherence. The space doesn't seem gritty or unclean, but sterilized somehow despite the explicit depictions on the stalls. At a time when the bathroom has been weaponized against the queer community, this reclaiming of the vulnerable space is fantastic and effective.

Voted Best Muralist in The Austin Chronicle's Best of Austin 2016 Readers Poll, Schipani uses a mural painting technique that is confident and punchy. The mélange of flesh tones, in simple silhouetted shapes, feels at once fresh and trendy. His layered shapes, clean lines, and pools of color create and maintain visual interest as you trace limbs and faces in couplings, or throuplings, or quadrouplings, or ....

On a smaller scale and in a separate room, Schipani's portrait series, We're Still Here, features busts drawn in colored pencil and acrylic. The portraits are subtle, realistic depictions of members of the LGBTQ community from Schipani's life at his time of transitioning, people Schipani identifies as "trans-cestors." The medium is one that Schipani is perhaps less comfortable with, and timidity comes across in the work, a contrast from his boldness with mural painting. The subjects appear plaintive and placid, drawn in ghostly shades of gray-blue. An exception is Self-Portrait, which is done in color. Schipani's green eyes peer at the viewer as he looks straight ahead from an ovoid face. As an openly trans man, Schipani is clear about the personal nature of his interest in masculinity.

By drawing from literally antiquated gender norms and situating his muscle men alongside Hellenic motifs, Schipani seems to be playfully arguing that the expectations society places on gender are never static, specifically those pressures surrounding masculinity. While the present toxicity of these expectations is unignorable, Schipani presents a surreal utopia where, perhaps, the crisis of masculinity can spark a beautiful, rollicking good time. 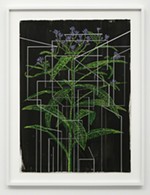