A ton of tales enliven this play by Annie Baker, but what do they tell us about the state of storytelling? 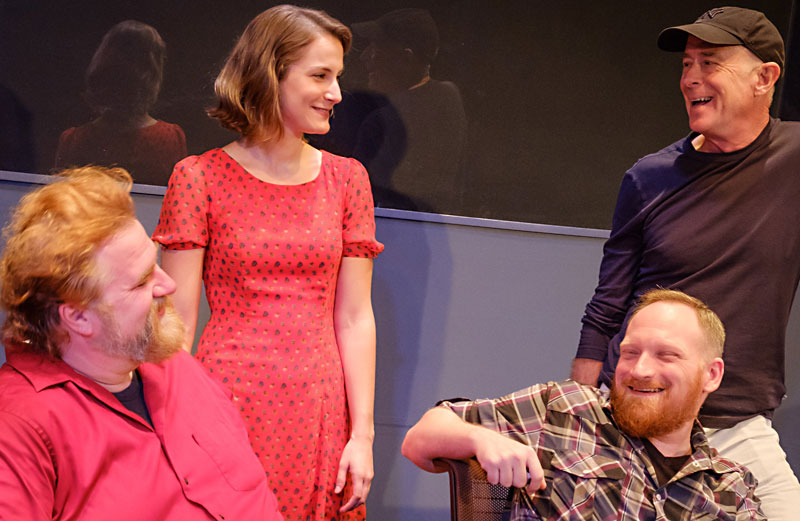 So here's a story: Once upon a time, six skilled storytellers were assembled in one room for the purpose of spinning a new tale that would be greater than any ever told, an über-story. In pursuit of this goal, their leader – the Jason in this mythic quest – required from each teller stories of their own lives, hoping to plot their course to the great tale through the personal. But they did not find it. And so the six (the number of man, the number of days God labored to make the world) spoke of monsters and the monstrous, of doppelgängers and opposites (the antipodes!), and other elements found in great narratives, but still they did not find it. Time began to blur, and the tellers remained in the room, prisoners for what felt like 1,001 nights, telling tale after tale like a circle of Scheherazades.

Playwright Annie Baker has clearly been thinking a lot about stories – what goes into them, how they matter to humanity, how we use them to make meaning of our lives and explain our world, how we commodify them in modern culture – and The Antipodes is the vessel into which she's poured her ideas and theories, to the point it brims over with them. Set in a corporate conference room stocked with cases of LaCroix and boxes of Kind bars, the six storytellers are hired guns for a major commercial project kept vague by Baker. It could be a Hollywood film franchise, a cable series, a video game, or a culture-changing app; all we know is its success hinges on the power of its story, and project leader Sandy keeps stressing that to his crew, who keep trying – at times with confidence, at times desperation – to deliver.

In Hyde Park Theatre's staging, the stories spun around the sturdy, stylish conference room table (designer Mark Pickell nails the high-gloss contempo-corporate vibe) may not earn the approval of Sandy (a casual Tom Green, by turns boosterish and detached), but they make an impression on the audience. In part, it's the material supplied by Baker, which is often outlandish and gets increasingly unreal as time passes, and in part it's the delivery by the actors: Lowell Bartholomee's almost exuberant description of a grotesque STD, Dave Yakubik's wistful memory of a summer tending chickens that he couldn't bring himself to hold, Saurabh Pradhan's feverish creation myth stitched together from traditions all over the globe, and Maria Latiolais' chipper account of a suburban childhood experience that spirals so far into folk tale territory that the Brothers Grimm deserve royalties.

It's in such moments as when Latiolais, as Sandy's gal Friday Sarah, talks about escaping from a witch who lived down the street, or Blake Robbins, as the storytellers' note-taker, doffs his shirt and dons a wolf mask to perform a primal ritual while everyone sleeps, that it seems Baker's play is less about people telling stories than People Telling Stories. She's seated us around the fire, to hear every kind of tale that human beings have ever deemed important to tell, and she's trying to communicate why they connected with us and still connect with us, why we need storytellers. But that approach makes The Antipodes feel at times more like a thesis than a drama. The characters serve the stories rather than the other way round, which leaves little dramatic concern for the storytellers.

For these Scheherazades, the only lives that are at stake are their professional ones. If Sandy or the suits to whom he answers pull the plug on this project, there will presumably be another down the line for each of them, telling a story for Amazon or Pixar or, heaven forbid, the Hallmark Channel. Which may be one of Baker's points: that too many of the stories being peddled today are impersonal, interchangeable product, and those peddling them don't really care what they are. Sandy, for all his championing of stories to the writers, never tells a story himself and tunes out when they tell theirs. Even with a cast as appealing as the one HPT Artistic Director Ken Webster has assembled here, The Antipodes comes off overall as a rather cool affair.

But the play's title and repeated talk of opposites called to mind another Baker play produced in the same space in the same month exactly two years earlier. The Flick was also confined to a single room and concentrated on a handful of people and had a lot to say about stories. But in her study of movies and our connection to them, Baker gave us passion and personality and intimacy in life. It was The Antipodes' antipode.