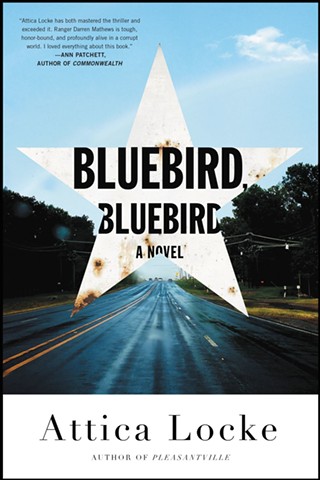 Anyone who's spent any time in the East Texas Piney Woods can tell you that the shadows there are dark and deep – so dark and deep that something hidden in them may never come to light. That's the country into which Darren Mathews drives in Attica Locke's Bluebird, Bluebird, and though this Texas Ranger knows the landscape, he almost loses himself in those shadows while trying to solve a double homicide in Lark, a bump in the road on Highway 59 northeast of Nacogdoches. That the victims were a black man and a white woman – the former a Chicago lawyer, the latter a local waitress – goes a long way toward explaining why the killings set the town on edge. Racial tensions run as high in Lark today as they did a century ago, the only change being that the white supremacists have switched from the KKK to the ABT – the Aryan Brotherhood of Texas.

Those tensions just make Mathews' job that much more complicated. For while Locke casts him from the mold of the classic mystery hero – troubled marriage, check; drinking problem, check; obstinate sense of honor, check; suspended by superiors, check; disobeys their orders anyway, check – she gives him one crucial difference: He's black. As a member of the Texas Rangers, that makes him a rarity. And as a lawman investigating the murder of a black man in Deep East Texas, that puts a target on his back. He isn't the enemy just for the secrets he may uncover; he's the enemy for the color of his skin.

A native Texan herself, Locke knows how such racial animus can breed an atmosphere of dread, and she employs it deftly to spark suspense – every shadow seems to conceal a threat, and Mathews' audacious visits to the icehouse favored by the ABT feel like a walk into the lion's den. But Locke also knows that there's more to East Texas than conflict. For every fraught moment that has you turning the page, there's a personal moment with the characters where the culture and history Locke dishes up has you linger on the page, to sop up every detail like red-eye gravy with a biscuit – loving descriptions of ramshackle roadside cafes and the strong black women who run them, of fresh homemade fried pies, of Lightnin' Hopkins wailing from the jukebox, of a love so strong that it could make a man who was "a Devil on the Guitar" give up the road to be with his woman, of a will so strong that black families wouldn't let anyone push them off the land they made their own. Locke gets the red dirt of East Texas under our nails as she pushes deeper into the novel's mystery, and with it we gain a greater understanding of not just the region but also the relationships in it and how tangled they can be. Black and white don't mix only in death.

This is a world in which the modest, low-slung cafe of Geneva Sweet, a black woman who has run it for decades, sits on one side of the road, and directly across from it sits a sprawling red-brick mansion designed to resemble Monticello, whose white owner, Wallace Jefferson III, also happens to own the icehouse frequented by the Aryan Brotherhood. Wally has no problem with whites who terrorize and murder blacks, and yet he can be very solicitous and even protective of Geneva. Something has been hidden in the shadows of the Piney Woods, and as a black Texas Ranger works to pull it into the light, Highway 59 proves to be a thin line between love and hate.