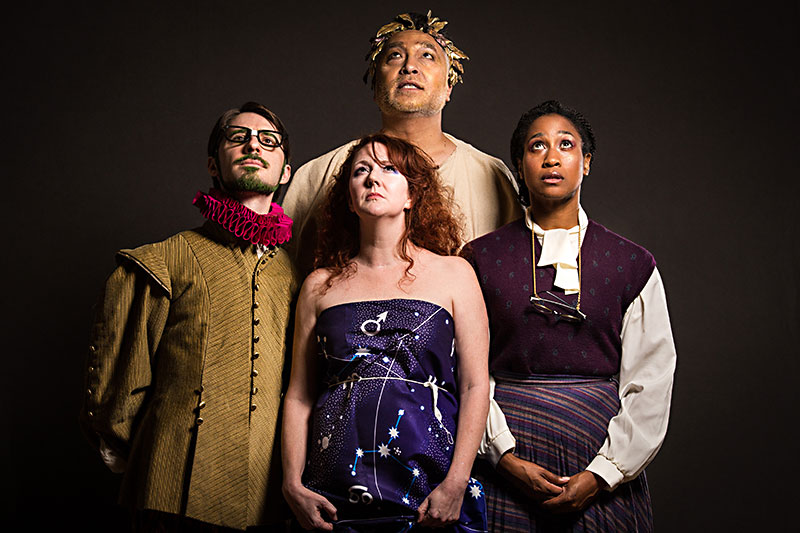 Reina Hardy's new play The Afterparty is a story about stars. They are astronomical bodies, so old and distant that they challenge human understanding. To poet Claire (Shannon Grounds), they are mythological beings, mortals tossed from Earth to the heavens by ancient gods.

Claire attracts the attention of one such being (Ja'Michael Darnell) by writing a poem about him. He then appears to her in the form of Devon, a childhood love interest who died when he was 12, before he and Claire could consummate their very young romance with so much as a kiss. He seduces her, and she soon finds herself on another astral plane.

I am 75 percent sure the above is correct. The exact details of the plot were fuzzy.

The central conflict in the story emerges in Act II, as Claire realizes that she has (a) been turned into a star and (b) would like to be human again, with friends and family and artisanal cheese shops and other things that give value to mortal life. (For the record, specialty cheese shops would probably be No. 3 on my list, too.)

The conflict plays out in what the play calls an afterparty, a celestial gathering at which Claire gets to hang out with three geniuses from history, mentioned in Act I when Devon and Claire are bantering as 10- and 11-year-olds, respectively, and Claire's future starry lover was only a twinkle in the sky. The afterparty scenes are the easily the best moments of the show, when Aristophanes (Rommel Sulit), Johannes Kepler (Trey Deason), and Henrietta Swan Leavitt (Valoneecia Tolbert) provide an amusing counterpoint to the earnestness of the main plot.

The cast in Shrewd Productions' world premiere performs well under Liz Fisher's direction, which keeps the actors in near-constant motion. Tolbert finds the juicy parts of each of her characters. Over the last few years, Deason has evolved into a very effective and engaging character actor, and his work is enjoyable here. The afterparty itself is so fascinating to watch, with loud personalities that easily agree and disagree, that it's tempting to wonder what a play might look like that spends all its time there, in the manner of Theresa Rebeck and Alexandra Gersten-Vassilaros' Omnium Gatherum.

The first act, however, is burdened by the oddness of the relationship between two children who alternate between speaking as children and as late teenagers. The dialogue and performances never quite home in on the curious quirks that steer conversation between fourth/fifth-graders, who are aware that adult things are out there but haven't yet mastered the vocabulary.

Andrew McIntyre's media design and Monica Pasut's costumes are eye-catching and effective. They support the imaginative world of the play, which brings mythology and science into a stage work that is cosmic in scale.

A version of this article appeared in print on June 29, 2018 with the headline: Starry Soirée