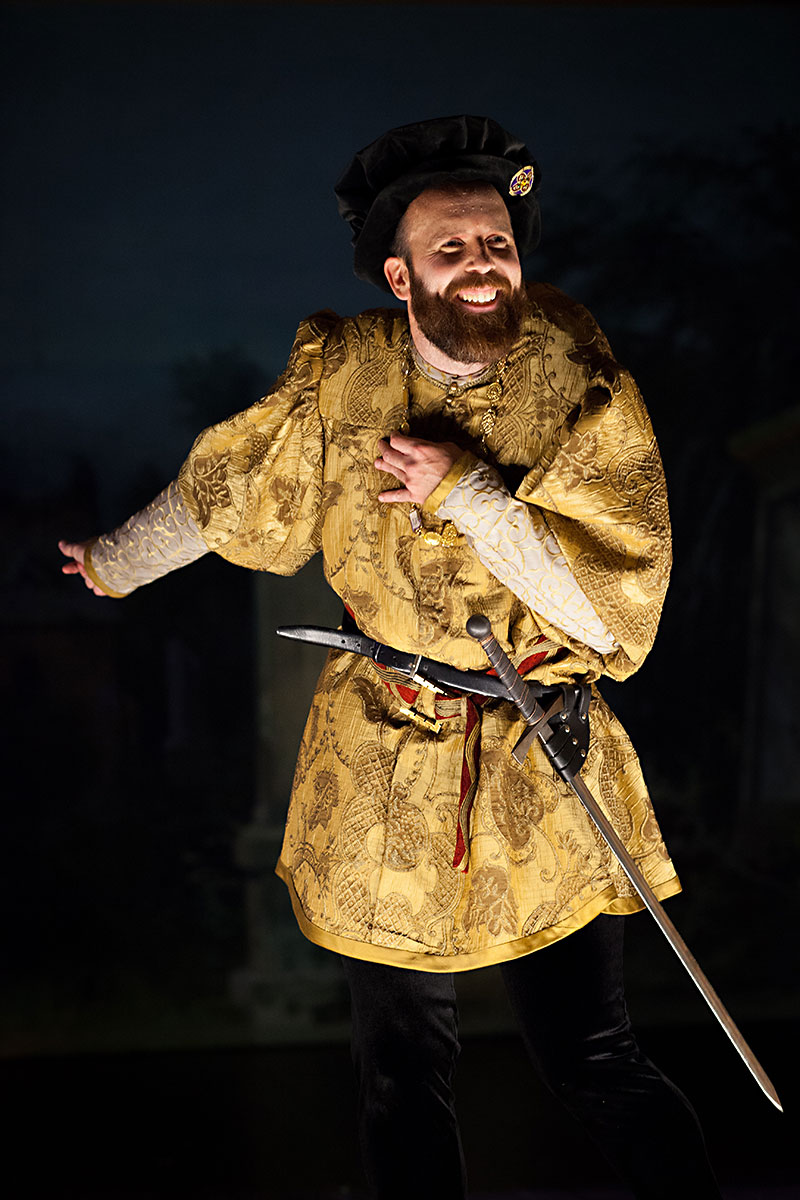 The Hidden Room Theatre, in conjunction with the Harry Ransom Center and Austin Scottish Rite Theater, now offers a play that is a ghost itself: Booth's Richard III.

Using a prompt book once belonging to John Wilkes Booth (yes, that John Wilkes Booth), discovered at the Ransom Center by curator Eric Colleary, director Beth Burns and her team faithfully re-create the performance that an audience may have seen on the evening of Monday, May 2, 1863 (as evidenced by a poster on display for a performance at the Arch Street Theatre in Philadelphia). The script contains Booth's own handwritten notes for the production. (A digital scan of the prompt book may be found at www.hrc.utexas.edu.)

Austin Scottish Rite Theater, erected in 1871, is the ideal venue for the undertaking. The cast and crew make delightful use of the stage's fly system, with its sumptuous backdrops – painted by Thomas Moses, a famous scenic painter of the period – flying in and out to perfectly frame each scene, be it castle, court, battlement, or battleground. Literal bells and whistles alert cast and crew to scene changes. The production even features, like any show of the day would, a prompter offstage. (The one here fed an actor a line on opening night, though I'm not certain if this was staged or not.) Jenny McNee provides the costuming, which is as gorgeous as it is impressive (Queen Elizabeth's dress in particular). Add musical accompaniment by a live quintet, and you can surely imagine yourself out for a night at the theatre in the 1860s.

It would be foolish to judge this show by a 2018 rubric; again, this is a time capsule brought to life, not a contemporary production. In that aspect (the only one that matters, frankly), it's a rousing success. As much a history project as a production, the painstaking work put in by all involved is evident, from the highly stylized and period-appropriate movement and gesture (thanks to Kate Meehan) to the highly stylized and affected vocal work (thanks to Justin Scalise).

"Highly stylized" is an important term to apply to this staging. It's damn near melodrama, which, though waning in popularity by the late 19th century, still would've been an appropriate form for this particular take on Richard III. This is not Shakespeare's version, but Colley Cibber's "Blood and Thunder" adaptation written in 1699, a much more violent (and much shorter) version that cobbles together fewer than 800 lines of the original text, new soliloquies for Richard, and even scenes from other plays featuring the Duke of Gloucester. In fact, the show begins with a scene from Henry VI, Part 3 rather than the familiar "winter of our discontent" soliloquy.

While all the performances are top-notch, a few go above and beyond. Brock England is a delight as King Henry VI and later Richmond. Robert Deike as Lord Stanley and Robert Matney as Buckingham are perfectly cast. Former Chronicle reviewer Lynn Mikeska's Lady Anne is impressive; in arguably the most stylized role, Mikeska connects with and invests in the material's version of the character with power and grace, embracing the melodrama but never sliding into camp. And as Richard, Judd Farris leaps in as a buffoonish, mustachio-twirling villain, but does so with genuine menace and threat. One wonders if he's playing Richard III or John Wilkes Booth playing Richard III. Either way, he's an absolute pleasure to watch.

Booth's Richard III is a fantastic piece of theatrical history brought joyfully to life by incredibly dedicated and inspired folks. Come for the lesson; stay for the performances.

A version of this article appeared in print on June 22, 2018 with the headline: A Villain Prov'd!

"Elliott Erwitt: Home Around the World" at the Ransom Center
This survey shows how the photographer captured the culture of his time in ways both compelling and frightening