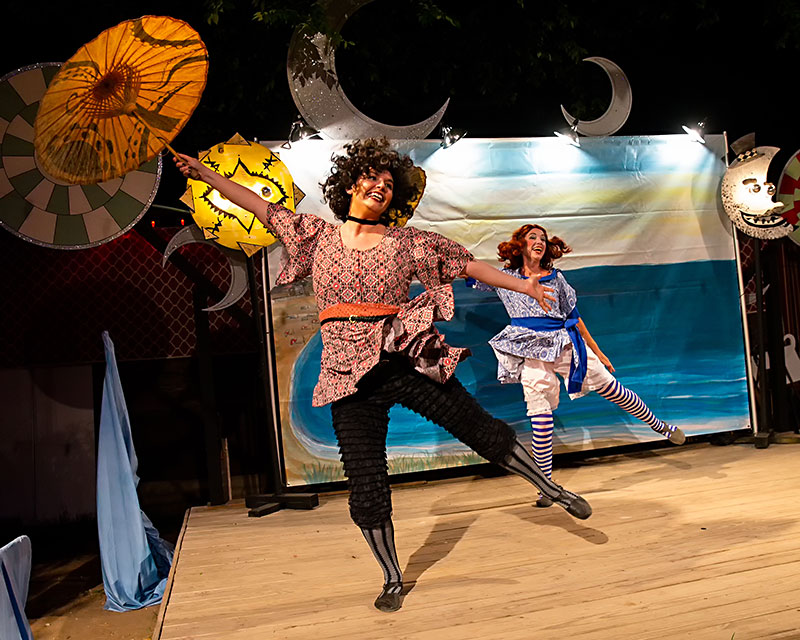 What do you get when you take a cheesy Fifties beach movie, set it in the Atlantic Northeast during Prohibition, throw in a Lovecraftian plot complete with Necronomicon and an appearance by a Great Old One, and tell the whole thing in the style of commedia dell'arte?

Not to worry, though. Austin's La Fenice is here to help you make sense of it all, in all its glorious silliness.

Betty (Genevieve Kinney) has just graduated high school and looks forward to a summer of debauchery with her best gal-pal Ruby (Kate Meehan, channeling her inner Harley Quinn), who has spent the winter whittling a couple of newfangled contraptions called "surfboards." Local rich man and token evil genius Doctor von Outtesbutte (Nate Dunaway in a hilarious Pantalone turn) would rather all the gross poor people be gone from the beach and enlists the help of PTSD-riddled Captain Stoneheart (Aaron Johnson) in cleaning up the boardwalk. Betty, though, has caught the eye of Outtesbutte's sensitive son Teddy (Adam Rodriguez, a perfect sad clown), who typically spends his days painting sunsets at the beach. As the story unfolds – led with narration, music, and live sound effects by bait shop owner Uomo Verme (loosely translated as "worm man" ... get it?), played by Dylan Blackthorne – we gather bits about the origin of Stoneheart's fear of the ocean and slowly learn not all is as it seems with Ruby, who isn't at all happy about the blossoming romance between Teddy and Betty. Ruby also seems rather attached to an old book bound by – wait, is that human skin?!

Look, "Cthulhu" is in the damn title, so I don't feel bad about revealing the eventual appearance of the Dread Outer God, but I won't spoil how the show gets there. The evening is packed with music (Blackthorne) and dance (Kinney), with fantastic costumes by Aaron Flynn and props by Meehan and Rodriguez. Toby Minor provides the fight choreography, and Tatiana Jitkoff the monster itself. Rodriguez is also responsible for the scenic design; a backdrop of a beach, with clever use of a sun and moon on either side of the stage, each illuminated to appropriately designate the time of day.

One needn't be incredibly familiar with commedia or the work of H.P. Lovecraft to fully appreciate the melodramatic zaniness on view here, but it certainly wouldn't hurt. It's an incredibly fun romp, though it does feel a little long at times – a fact not aided by its setting on the outdoor stage at the Vortex/Butterfly Bar, where it can still feel rather sweltering even at the show's 10pm start time. La Fenice is certainly not in control of the weather, though, so grab a cool brew from the bar and give yourself over to the evil fun.

A version of this article appeared in print on June 8, 2018 with the headline: Hang Ten(tacles)!

La Fenice
Out of the ashes, new zaniness