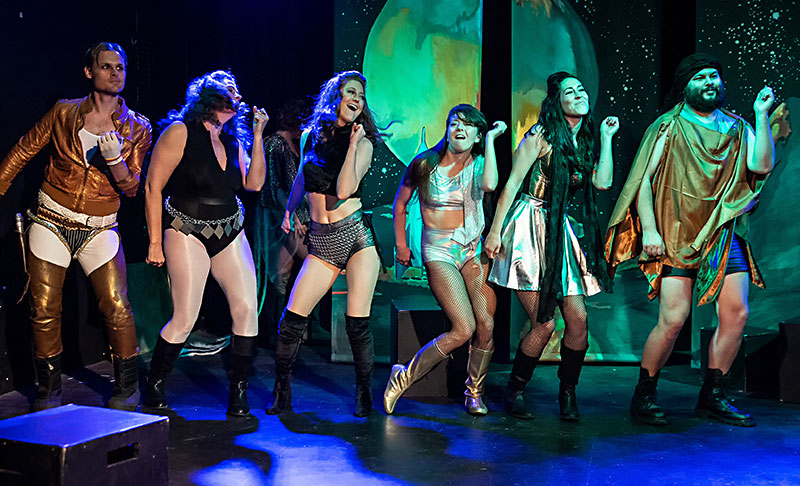 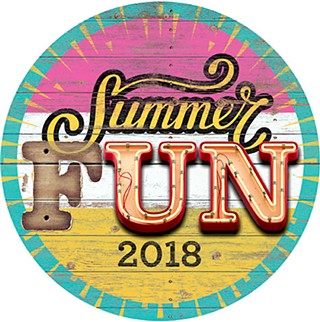 She's a mod Ms. with a mission: to spread love across the universe. And no matter what planet she visits or aliens she meets, everybody grooves on her swingin' Sixties vibe, all that Flower-Power positivity in a pair of kinky boots. It's not that this Earth girl is easy; she's just open to all invitations, which leads to a lot of close encounters. You may see a resemblance to a galactic go-go gal named Barbarella, but let's just call this one Sexy Future Space Lady – which is also the name of the show at the Hideout Theatre where you can currently follow her escapades. Now, doesn't summer sound more fun star-trekking with her, not knowing what cosmic bed she'll bounce into next?

Sure, but guess what? The talents behind Sexy Future Space Lady also don't know what cosmic bed she'll bounce into next. They have no idea from week to week where in space she'll be or even who will be playing the Sexy Future Space Lady. That's because this is another of the Hideout's improvised productions, shows that use existing films, plays, TV shows, or genres as springboards for new works they concoct on the spot. Last summer, Death by Musical added to the ranks of campy, mayhem-filled musicals by appropriating attitudes and elements of shows such as The Rocky Horror Show and Little Shop of Horrors, and The Kindness of Strangers expanded the oeuvre of Tennessee Williams by drawing on character types and themes embedded in the dramatist's works. Rock operas, Peter Pan, murder mysteries by Agatha Christie, TV Westerns of the Sixties – these and more have been inspirations for Hideout improvised shows. And Courtney Hopkin thought that Barbarella deserved to be one, too.

Hopkin had first seen Roger Vadim's 1968 film when she was in college and loved "how silly it was, as well as weird and sexy." How could it not be with a mad scientist (named Durand Durand), a blind but very buff angel, flesh-eating dolls, a man bong, death by parakeets, and Jane Fonda as the titular rocket jockey doing a zero-gravity striptease, having sex with nearly everyone who does her a favor, and defeating a pleasure machine designed to orgasm her to death. The star's star turn is what Hopkin finds especially appealing. "Jane Fonda is so-o-o charming," she says, "and she's not trying to be sexy. She's not being sultry. She's not toying with us. She's just walking around, reacting to the insanity around her." That quality, more than the camp, was where Hopkin saw potential for an improv take on Barbarella: Sexy Future Space Lady can be a strong, positive woman who's really open to people (and aliens), and "it's the magic of who she is that makes everything fun in the show."

As director, Hopkin didn't feel the need to cast Sexy Future Space Lady with superfans for whom Barbarella was the cinematic equivalent of the Excessive Machine. More important to her was having "performers who would mold [themselves] to the many facets of the Barbarella universe." Her cast – a mix of people who had seen Barbarella and had never seen it – watched the film as a group, which led them, Hopkin says, to talk about "why it felt fun and not weird for this woman to be going around and having sex adventures, why I could watch it and not feel like I'm watching someone being exploited, why I felt I was watching someone go around and have a good time of her own volition."

Collectively understanding what makes Barbarella fun and not icky helps ground the Sexy Future Space Lady improvisers in a shared sensibility about the new worlds and characters they'll create week to week. While they won't copy the film's plot or set pieces, they'll be incorporating into performances certain tropes from the movie that will help them feel cut from the same space-suit cloth as Barbarella: people or creatures who need help from the Sexy Future Space Lady, traps for her to escape from, sex, and villains with absurdly specific philosophies. "We loved that Durand Durand said he believed in two qualities: 'Truth and essence!' So we wanted our villains to be like that, having mantras that might be just two weird, unrelated things they repeat over and over, that sound fun and pretentious and meaningless, like 'I believe in two things: getting enough rest and validity.'"

Hopkin knew her cast had successfully landed in the Barbarella universe the day someone shot a ray gun at Katie Dahm, who was playing the Sexy Future Space Lady. "But instead of it hurting her," says Hopkin, "she started giggling. And then she started enjoying it, and she was clearly getting pleasure out of being shot with this ray gun. That's when I thought, 'Oh my God! This is it. This is happening!'"

Audiences have been enjoying Sexy Future Space Lady, says Hopkin, especially "the silly innuendo. We do a lot of it, and I feel it's really freeing for people to watch a bunch of ladies – and some dudes – have a good time with sexuality. It feels very fraught right now, because it is, but this helps us remind ourselves that [sex] is a thing that's fun for us and that we enjoy doing and a thing we enjoy talking about. I feel this is a nice respite from how hard things have been lately as a society. I want people to come and have fun and relax."

Looking for other places to get your unscripted fun on this season? Austin has four hot spots that are always awash in improvisational delights. Here is a handful of their summer offerings and where you can go to get more information.

Hail to the Queen
June 23, 30; July 21, 28, Sat., 7pm, Fallout
An improvised drag extravaganza, complete with lip sync battle, with looks at drag culture from the inside and outside, bad behavior and all.

Does the delight you see in improv shows have you itching to try it yourself? A range of classes are offered at all four improv theatres, plus Merlin Works, headed by improv empress Shana Merlin (Girls Girls Girls), and many introductory classes are absolutely FREE. What easier way to say "Yes, and" to improv? Look for these summer sessions:

A version of this article appeared in print on May 18, 2018 with the headline: Unscripted 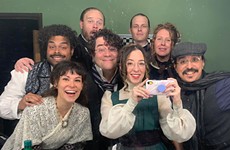