Theresa Rebeck's play abounds in contradictions and irony, and this staging embraces them all – for the good and bad 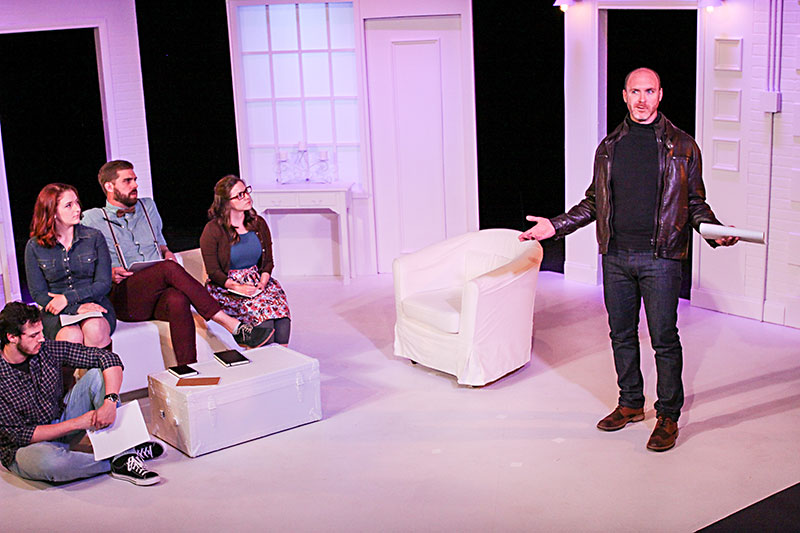 Fair warning: Much of the following opinion may not seem to make sense at first. If it does later, however, I've done my job of conveying my personal experience.

Having not seen the physical script for Theresa Rebeck's Seminar, I'm unsure if its set design is specified within or was the choice of Michael Krauss, scenic designer for this Jarrott Productions outing. It's glorious either way: Everything in this expansive Manhattan apartment is stark white, top to bottom, and given a sense of emotional temperature through Chris Conard's thoughtful lighting. Less a blank canvas than a clean slate, the set conjures the dread that some writers experience at the sight of an empty page, and the thrill that comes with first marring it with words – deflowering with art.

Tech elements aside, I've been thinking about the script for a couple of days now – typically the sign of a thoughtful, well-executed production – and I've yet to decide if it's a meta-masterpiece or accidental genius, simultaneously confusing and intriguing. It's a bit of an unspoken challenge to write about the art of writing and make it interesting to anyone else – no easy feat, I assure you. Seminar works on that level, but not at first, which is possibly the point if you allow it to be.

The first scene introduces us to four young would-be fiction writers: feminist ingénue Kate (Sarah Zeringue), at whose apartment the seminar meets; legacy writer Douglas (Devin Finn), whose family name far exceeds his talent; fiery and opportunistic Izzy (Regan Goins); and idealist Martin (Brooks Laney), a Kerouac enthusiast. I'll be blunt: It's a terrible opening scene. It's boring and unengaging and does nothing to make us care about these characters. It serves only to showcase how insufferable writers talking about writing can be.

In the following scene, however, we're introduced to Leonard, the teacher of the seminar. The energy, authenticity, and authority that Colum P. Morgan brings to the role immediately shifts the tone, and we watch as he demolishes Kate's story, stating he can't get more than five words in because it's so boring and unengaging.

An element that makes Seminar fascinating is its continued confounding of expectation. There's a seemingly superficial insistence, for example, that Leonard is an antagonist, a washed-up asshole who has lost touch and doesn't understand the talent and artistic souls of the four students. As written and performed, however, Leonard almost seems a voice of reason, a no-nonsense pragmatist who will have none of these "snowflakes" or their "safe spaces" (terms which are not used in the script, but certainly thematically evoked). This may, admittedly, have more to do with my specific digestion of the play than its actors' or director's intent ... but then again, how does one separate the two?

I'm left to assume that director Bryan Bradford must fully understand and embrace Seminar's inherent contradictions and irony, as that's the only way the play works. It takes some effort to realize and stick with what he's giving us through the piece, but worthwhile in the end. The opposite side of that coin, however, is that some of the performances lack directorial challenge. Morgan dominates any scene in which he's present, and Finn and Goins admirably keep up. Laney and Zeringue feel a bit flat, though, and may have done well with some pushing to raise the stakes. There's also the fact that Leonard talks a lot about the need for a sexual edge, yet the play's romantic entanglements seem devoid of physical chemistry ... directorial error or ironic artistic choice?

If this seems one of those maddening reviews where it sounds like I both loved and hated the play, and that I've contradicted myself all over the place – well, it is and I did and I have. To clarify: I did quite enjoy it, but it took me awhile to realize I had. Good writing, after all, should keep you thinking about it awhile.