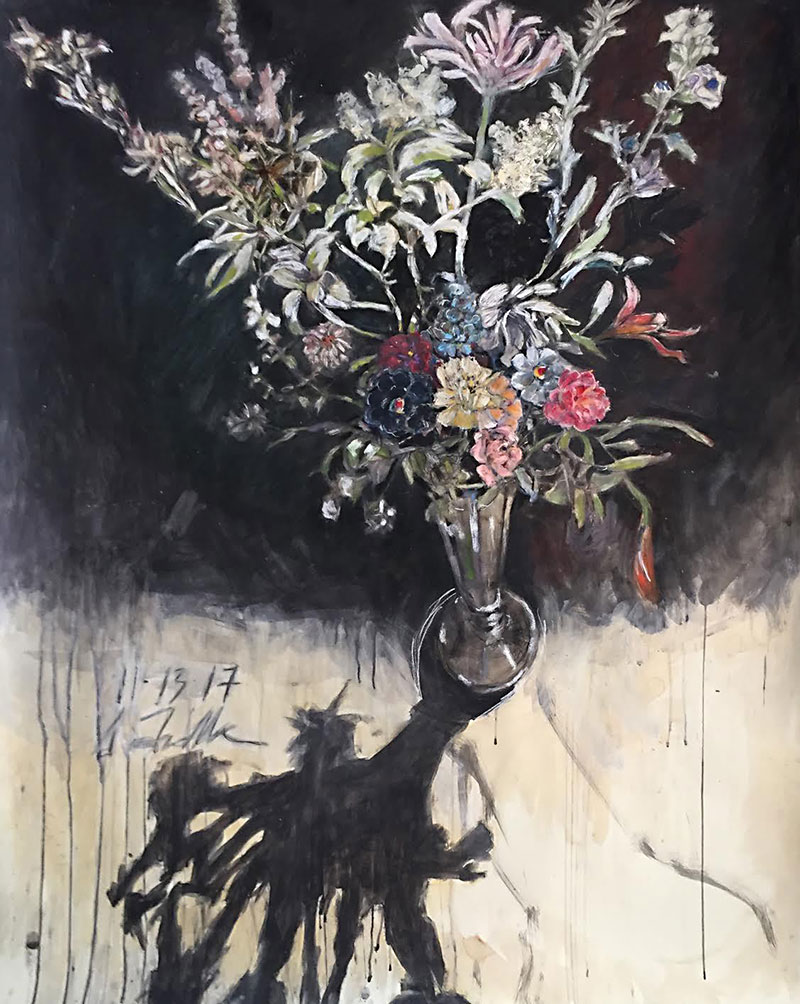 Before the proliferation of plastic baggies, the vasculum was the botanist's vessel of choice. It keeps specimens protected and alive during transportation after a day of field work. Spencer Fidler's show "Vasculum" at Flatbed Press achieves a similar purpose in that its offerings are the product of a daily "field work," a practice of preservation of craft and creativity. The show offers a peek into the seasoned artist's daily practice with works ranging from 2002 to 2018.

In what sounds like an idyllic routine, Fidler gathers daily floral offerings from his Las Cruces property, arranges what he's gathered, and then draws the arrangement. The drawings, often a mix of pastels, conté, charcoal, ink, and graphite on large sheets of paper, are done in an expressive, quick style. It's easy to imagine slight changes as reflective of Fidler's shifting temperament – a more chaotic bramble of flowers on one day and a sparse, linear arrangement on another. In recent years, he seems to have landed on a preferred setup: a bulbous vase on a small tri-legged table seen from a dramatic bird's-eye perspective that renders the best part of the still life, the blossoms, largest and sprouting up at the viewer, a decision that injects some vigor into the well-trod subject matter.

That subject matter, its moody and dramatic representation, a persistently neutral background, and Fidler's method of gathering flowers from outside his home recall French flower painter Henri Fantin-Latour, but Fantin-Latour's realistic representation is absent. While the flora are identifiable, they are often drawn with scrawling, gestural strokes. At times, ink trickles down the paper. The daily nature of these drawings is informal, a conditioning of creative muscles for the sake of a daily practice and enjoyment. "Vasculum" is pleasant and consistent. It's not likely to enthrall you, but it's also not going to disappoint. The titles are simply the dates of creation, also scrawled frantically on the drawings themselves.

In this way, the drawings offer a visual almanac of the seasons in New Mexico and of Fidler's mood and routine. In November of 2016, Fidler gathered some sprightly daisies, stalks of puffball petals, and coral sprigs. They are drawn mostly in outline, with slight washes of color, and against a background delicately marbled with an ink wash. Compare to a year later, November 13, 2017, when he jammed the same vase full of jewel-toned mums, blushing pea flowers, and bright roses and drew them in thick crayon strokes of robust color against a dark, dripping ink background.

From earlier works, 6-13-11, a printer paper-sized pen drawing of thick crowded bulbs in a square vase, to the most recent, 2-25-18, a sparse arrangement consisting of a single crimson-flowered twig erupting from a glass bottle on a five-foot-tall piece of paper, the viewer can track shifts in medium, size, and technique. This aspect of the show is its most interesting: the breadth of time and persistence of practice. “James Surls: Man on Edge” at Flatbed
The prints by this renowned Texas artist are like portals to other worlds, revealing rapturous visions and terrifying cosmic disturbances