Capital T Theatre's I and You 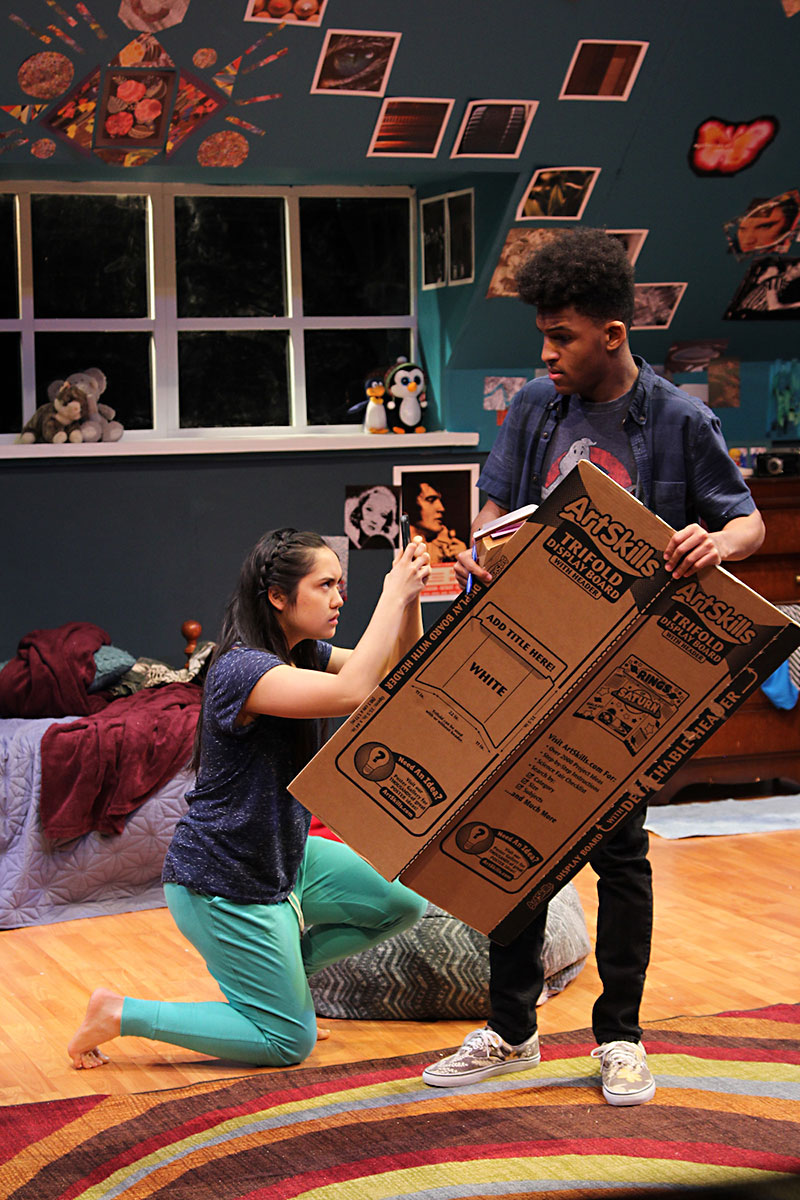 Walt Whitman's "Song of Myself": I knew there was a reason I didn't resell my Norton Anthology from undergrad.

Lauren Gunderson's play I and You features two high school students who are tasked with delivering a speech about the famous 19th century American poem and making a visual display. The catch is, Caroline (Mia King) has end-stage liver disease, and she's been out of school for months. Anthony (Kenah Benefield) is her classmate and volunteered to be her partner, and he shows up at her house one evening after a basketball game to work on the project, due the next morning.

For most of the Capital T Theatre production, it feels like two precocious, prickly teenagers collaborating on an all-nighter. It mostly works. Caroline and Anthony are confronting the usual teenage demons, plus a lot of the themes featured in Whitman's poem such as life and death. They're also two kids on the cusp of adulthood, where the specter of something more than high school has encouraged them to explore beyond the average range of their peers and begin to explore their own identities.

Under Simone Alexander's direction, King and Benefield have pushed for a very natural delivery. They've succeeded, but sometimes at the expense of basic diction; the words can get lost in Ground Floor Theatre's high and wide space. Otherwise, they have located their characters in a place of truth.

Most of the issues come down to Gunderson's script. Gunderson can be a talky, talky writer; characters tend to work through their obstacles by talking rather than acting, and the premise of I and You doesn't allow for much action beyond drawing with glitter pens and a little bit of dancing to whatever's on the laptop. The biggest issue that manifests in the play is that the sense of urgency falls away pretty quickly and no amount of "Some of us have somewhere to be tomorrow morning!" and "This project is due tomorrow, come on!" can save it from the natural tendency of all-nighters to go the way all-nighters go.

There's also a wrong note in the way that the two students interact with Whitman's poetry. As someone who was (is) a huge nerd, who thought as a teenager that she was so aware of what Whitman was really saying, I get the awkward ways in which high schoolers express their love of words. But how is Anthony struggling with this project so much that he needs Caroline's help if he can rattle off quotes from the epic poem by heart and defend Whitman's brilliance to her when she gets cynical about it? And Caroline's innate grasp of transcendentalism blossoms pretty darn fast considering that she didn't see the point when the evening began.

Also, how does someone in urgent need of a liver transplant actually move around? Because Caroline seems remarkably vital.

Gunderson's ending is a good way to explain away a lot of these issues, although it doesn't go back in time and erase the disbelief the audience may have experienced for the first 85 minutes.

Nod of respect to Mark Pickell's set design, for making a "not too girly" bedroom into something more.